Home /
News /
When Trudeau sought to free 2 Canadians, 'Beijing had no time' for him. Will Trump?

When Trudeau sought to free 2 Canadians, 'Beijing had no time' for him. Will Trump?

With Justin Trudeau's calls for the release of two detained Canadians in China going unheeded by one superpower, the Canadian prime minister is now seeking help from another. Whether the economic giant to Canada's south is willing to come to its neighbour's aid may depend on a clash of Washington's interests amid its own multi-pronged conflict with Beijing.

The White House will host Trudeau next week, but it's hardly a convenient moment for Trudeau to ask Trump for a favour.

China and the U.S. are locked in a trade war. The Trump administration is dealing with new financial pressures brought on by Chinese economic countermeasures. Meanwhile, the U.S. is ramping up military tensions by floating American warships into the South China Sea and selling high-grade weapons to Taiwan, which China views as a renegade province.

"At that level, it's definitely this sense of great powers rumbling," said Chris Sands, director of the Center for Canadian Studies at Johns Hopkins University. "And that puts Canada in a tough position. Because China typically has not dealt with middle powers very well."

Enter Trudeau, bearing his own request for Trump to intervene on behalf of two Canadians detained in China. He is due to arrive to the White House on Wednesday, after his personal attempt to arrange a conversation with China's premier failed.

Trudeau's outreach effort was to seek intervention on behalf of  Michael Kovrig and Michael Spavor, who have for months been languishing in a Chinese detention centre. Beijing snubbed that request. 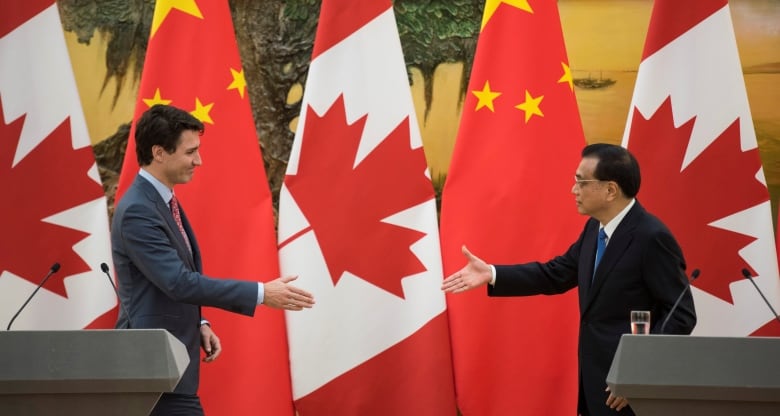 Trudeau and Chinese Premier Li Keqiang reach out to shake hands during a news conference in Beijing in 2017. Trudeau tried to reach out to China this year to secure the release of two detained Canadians. (Fred Dufour/Reuters)

"Canada tried to reach out to Beijing, and Beijing had no time for Canada because Canada has annoyed them," Sands said.

Now, Trudeau is going to the U.S., hoping a traditional ally will at least give Canada the time of day.

Intervention from the U.S. on Canada's behalf would be more influential, as Chinese leaders are less likely to ignore states able to exert great global influence, Sands said.

"China thinks when it gets respect back from them, it validates China as a great nation."

The president has put Canada in an awful place. His mixing legal and trade policy together is completely unconventional and unfortunate.- Bruce Heyman, former U.S. ambassador to Canada

The Trump administration, as Sands sees it, has been poor at dealing with "middle powers" like Canada, however. Ottawa's strained relations with Beijing may have been collateral damage in an ongoing scuffle between Beijing and Washington.

The detentions of Kovrig and Spavor are suspected of being retaliatory measures against Canada after the arrest of Huawei CFO Meng Wanzhou in Vancouver. This, despite Meng's arrest being made at the behest of American authorities.

The blowback was nevertheless severe for Canada, amid fears Meng's fate is being used as a bargaining chip in the U.S.-China trade war. Meng is awaiting extradition to the U.S. 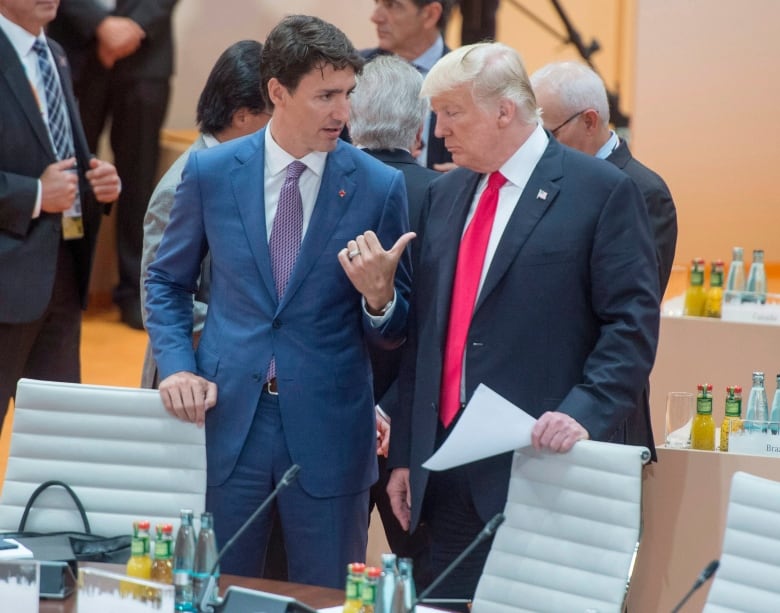 Trudeau speaks to Trump at the G20 summit in 2017. Trudeau is set to visit Trump at the White House on Wednesday, and is expected to make an appeal for the U.S. president to intervene in the detention of two Canadians in China. (Ryan Remiorz/The Canadian Press)

"The president has put Canada in an awful place," said former U.S. ambassador to Canada Bruce Heyman. "His mixing legal and trade policy together is completely unconventional and unfortunate."

What Trudeau might demand is clarification, the former diplomat said, specifically on whether the extradition battle over Meng is truly a legal matter, "or if this is a trade-negotiation tactic" the U.S. is employing "and putting Canada in a difficult place."

"This gives the prime minister the opportunity to say, 'Hey, I just want to let you know when you bring an extradition issue along with a trade issue, it really puts us in a tough spot,'" Heyman said.

Although Trudeau is expected on Wednesday to have an audience with Trump, it's questionable whether any efforts to persuade the president to speak up for the detained Canadians will succeed.

Trump might be loath, for example, to divulge to the Chinese how important the matter of the Canadian detainees is to the U.S. or to Canada. For the Americans, "asking the Chinese for a favour during a period of confrontation" complicates matters, he said, because it also signals to the Chinese that these kinds of detentions work as negotiating tools. Encouraging more detentions would be a grave setback.

"At the level of the president, he's just trying to keep his decks clear in a complex pressure campaign," Sands said. 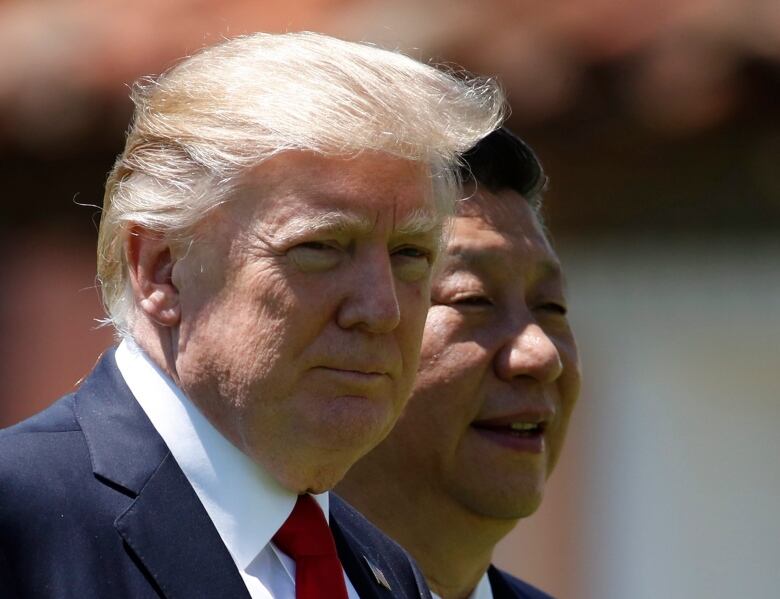 Trump and Chinese President Xi Jinping walk at Mar-a-Lago in Palm Beach, Fla., in 2017. The U.S. and China are engaged in a trade war. (Alex Brandon/The Associated Press)

Rather than framing the scenario as one in which Canada is looking to the U.S. like a big brother and asking for help, Trudeau might do well to use its levers of influence to show how the release of the Canadian detainees is in U.S. interest.

The Americans need Canada's support in national security as well as trade, and that fellowship will be crucial for Trump to bear in mind, said Scott Kennedy, a China specialist with the Center for Strategic and International Studies.

"We're alliance partners," he said. "You do things because of the alliance. Within the context of that partnership and the rule of law, we have to watch other's backs, and that is good for both brothers — regardless of size."

Trudeau's Washington visit is meant to "reaffirm America's deep partnership with Canada," according to a White House release. But Trudeau was likely to encounter Trump in a matter of days anyway at the G20 summit in Japan on June 28. That brings the urgency of Wednesday's trip into sharper focus.

If Trudeau is expecting action for Canada's cause from a traditional ally, though, he might leave disappointed.

"I am not optimistic that Trudeau will be able to get Trump to take our side. Under President Trump, traditional allies have taken on a different meaning," said Lynette Ong, an associate professor of political science and China expert at the Munk School of Global Affairs and Public Policy at the University of Toronto.

Ong referenced the transactional nature of Trump's governing style. Given an already fraught relationship between Trump and Trudeau, with the two leaders having exchanged harsh words, the U.S. president might need something more from Canada that would benefit the U.S. before he can be persuaded to take up the Canadian detainees' cause.

"Canada will need to create a supply of service to the U.S. that it needs but can't get from elsewhere — and use that as a leverage against the U.S.," Ong said.

"It's up to Trudeau's political ingenuity or lack thereof to make that happen."

'A good connection': How a pub landlord wound...

Tesla's mystery test car may be a Model S refresh

3 An AI founder’s struggle to be seen in the age of Black...

6 Neil Young Objects To Use Of 3 Of His Songs By Donald...

10 Stephen Jackson Calls for #BlackOutDay on 4th of July:...