A White House budget official testified Saturday in a closed-door session of the Donald Trump impeachment inquiry in Washington, D.C., about the holdup of military aid to Ukraine.

Mark Sandy is the first person with the Office of Management and Budget (OMB) to testify on Capitol Hill before the U.S. House of Representatives inquiry after three political appointees defied congressional subpoenas to appear.

Sandy complied with a subpoena issued to compel his testimony, an official working on the impeachment inquiry of the U.S. president said as the inquiry was set to continue public hearings next week.

Trump's pressure on Ukraine is at the heart of the Democratic-led inquiry into whether the Republican president misused U.S. foreign policy to undermine former vice-president Joe Biden, one of his potential opponents in the 2020 election.

Watch: Key moments from Day 2 of the Trump impeachment inquiry

In a disclosure that drew the most attention on Wednesday's first day of public hearings last week, acting ambassador to Ukraine William Taylor pointed to Trump's keen interest in getting the eastern European ally to investigate Biden, and reiterated his understanding that $391 million US in U.S. security aid was withheld from Kyiv unless it co-operated.

Morrison, who was on the July 25 call between Trump and Ukrainian President Volodmyr Zelensky, said he had reviewed Taylor's testimony and did not dispute it on any significant points.

Williams, the Pence aide, that Trump's insistence that Ukraine carry out politically sensitive investigations "struck me as unusual and inappropriate." Williams testified her notes from the July 25 call, which she listened to, included a mention of Burisma by Zelensky, the firm that had hired Biden's son Hunter Biden as a director.

The word was absent from the White House's rough transcript of the call. 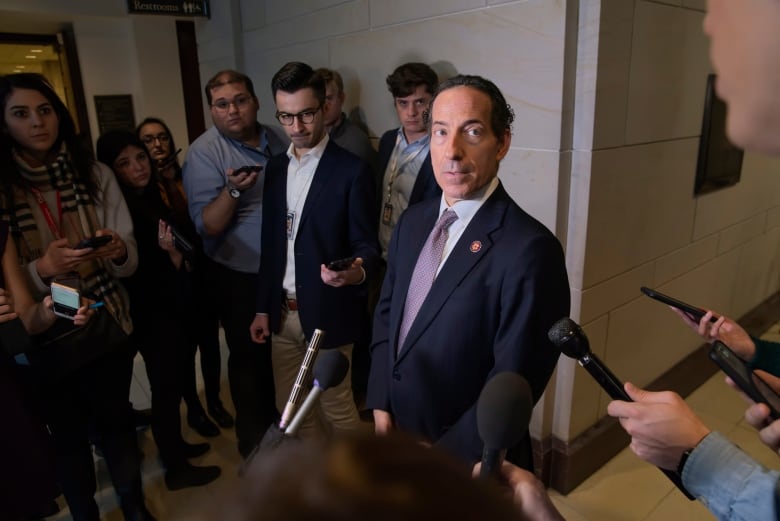 Maryland Democratic Rep. Jamie Raskin, a member of the House judiciary committee and the committee on oversight reform, told reporters Sandy was testifying to shed light on whether military aid was held up for political reasons. (J. Scott Applewhite/Associated Press)

Rep. Jamie Raskin, a Maryland Democratic member of the judiciary and oversight committees, said Sandy was brought in to shed light on whether military aid was held up for political reasons.

"This is a technical part of our investigation," Raskin told reporters outside the interview room. "We want to know exactly how the president translated his political objective to shake down the Ukrainian government for the favours he wanted [into] the budget process."

On Friday, Trump launched a Twitter attack on a former U.S. ambassador to Ukraine while she was testifying to an impeachment hearing in Congress, in an extraordinary moment that Democrats said amounted to witness intimidation.

Marie Yovanovitch, a Montreal-born career diplomat, explained on the second day of televised impeachment hearings how she had fought corruption in Ukraine and how the Trump administration abruptly removed her from her post earlier this year.

While Yovanovitch's testimony dominated headlines on Friday, a closed-door deposition lawmakers held later in the day with David Holmes, a U.S. embassy official in Kyiv, could prove more consequential.

Holmes told lawmakers he overheard a phone call between Trump and Gordon Sondland, the U.S. ambassador to the European Union, in which the president inquired about Ukraine's willingness to carry out investigations of Biden and his son.

The phone call occurred one day after the now-infamous July 25 phone conversation between Trump and his Ukrainian counterpart at the heart of the impeachment probe. 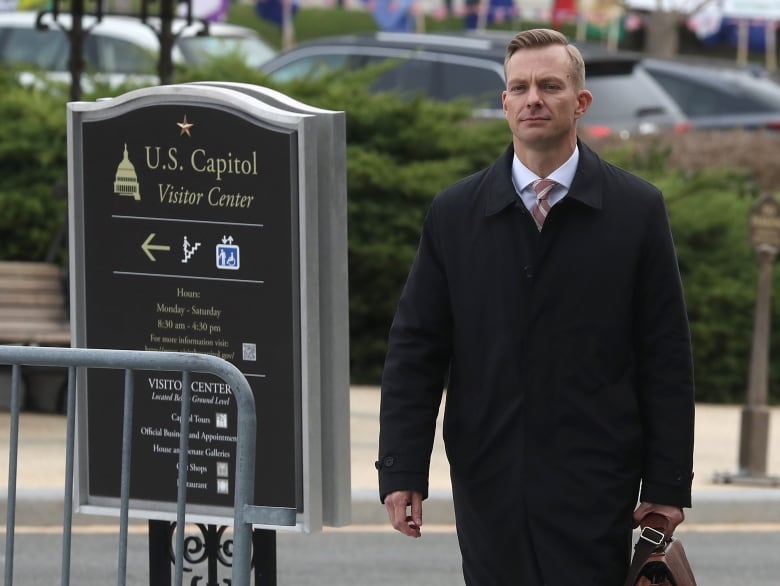 David Holmes, a U.S. embassy official in Kyiv, walks to a closed-door deposition on Friday. He told lawmakers overheard a call between Trump and Gordon Sondland, U.S. ambassador to the EU, in which the president inquired about Ukraine's willingness to carry out investigations of the Bidens. (Mark Wilson/Getty Images)

"So, he's gonna do the investigation?" Trump asked Sondland, referring to Zelensky, according to Holmes's testimony.

"He's gonna do it," replied Sondland, adding the Ukrainian president would do "anything you ask him to," according to Holmes.

The testimony by Holmes, an aide to top U.S. diplomat in Ukraine Bill Taylor, ties Trump more directly to a pressure campaign in Ukraine to investigate the Bidens led by Trump's personal lawyer, Rudy Giuliani.

Holmes's statement appears to contradict Sondland's previous sworn testimony about his interactions with Trump, in which he did not mention the July 26 phone call with the president.

Sondland, who has already revised his testimony once, is scheduled to testify publicly on Wednesday.

Rep. Eric Swalwell, a California Democrat on the House intelligence committee, told reporters on Saturday that House leaders were considering bringing Holmes in for a public hearing.

"In that [Holmes] statement that was released there was a lot to be concerned about, particularly that more witnesses described the president's obsession with investigating his political opponents," Swalwell said.

4 Someone Says American Girl Advertised And Sold ‘A Slave...

9 David Foster ‘will never disclose’ why he divorced...

10 This Artist Brings Disney Princesses To The 21st Century