When I was 29 years old, I took my clothes off for a professional photographer. I posed, I contoured my body, and I stared into the camera with my sexiest pout.

The entire experience was empowering, healing, and exactly what I needed at that point in my life.

For the record, I'm not a girl who ever before had much interest in naked images of myself.

To this day, I've still never sexted a nudie.

And to say I've got some body image issues would be an understatement though I'd like to think I'm at a healthier place with each passing year.

RELATED: Why You Absolutely Must Take Naked Photos

The real reason for that photo shoot was because I was broken and I was trying with everything inside of me to claw my way out of the hole I had fallen in.

Just a year and a half before, I had undergone my second IVF cycle. Like the cycle before that, it failed.

My body had let me down in this agonizing way that I had never before believed would be possible.

I would never carry a baby. The one thing I had known I wanted my entire life was now forever out of my reach. And I hated my body for that fact.

Of course, a hatred of my body was nothing new. I was 13 years old the first time I stuck my finger down my throat.

Eighteen the first time I cut myself. I had a long history of body-loathing.

My failed IVF cycles only added to my decades-long hatred of this body I was forced to call my own.

It was further proof of what I had known all along: that my body was faulty, that it was as far from perfection as it could possibly be and that it would always let me down.

Now, as someone who has the perspective afforded by time and distance, I can see the fallacy in those words.

But it was how I felt then and I wasn't sure I was ever going to get over the heartbreak I was in the midst of experiencing.

It was only through the guidance of caring friends that I realized I had to try.

Which was why the year of my 29th birthday, I vowed to ignite some semblance of love for my body. To call a truce, and start treating it with the respect it deserved.

Because hating my body wasn't going to get me anywhere healthy.

Over the next few months, I tried to shift my focus from the loss I felt in my empty womb to goals I had never before thought to pursue.

I began training for my first 5k. Then an all-women's bike ride. Then a sprint triathlon. And finally, a half marathon.

I pursued other goals as well. I wrote a book and I set my sights on foster care adoption.

But it was the pursuit of finding love for my body that perhaps fueled all the rest because if I hadn't committed to loving myself, I'm not sure I would've accomplished any of the rest.

And so that was how I found myself stripping down that day in July, barring more than just my soul to a photographer with a focused lens.

It was all part of being vulnerable, being open, and being loving to myself.

Those pictures allowed me to look at my body in a different way. To see the beauty I had been told was there, and to cherish the parts that were strong, as well as those that spoke to my femininity.

Very few people have seen the bulk of those photos today. They weren't taken for anyone else.

They were about me, trying to honor my body in a way I would've been totally opposed to doing even just a few years prior. They were about embracing this body of mine, and being willing to show it love. 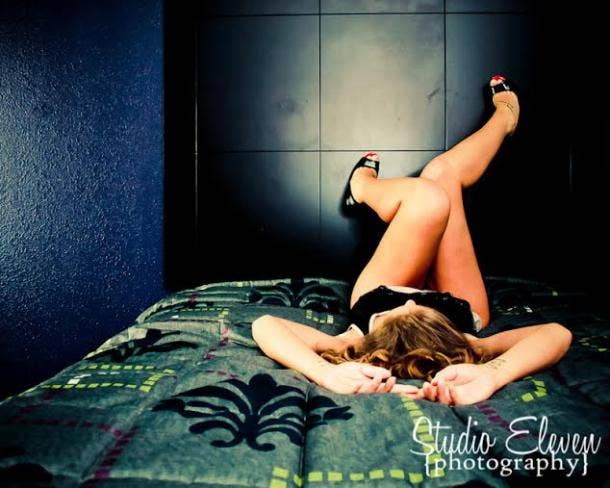 So when I read about Demi Lovato's nude photo shoot and her comments about how even just six months ago it wouldn't have been something she was willing to do, I got it.

I understood as she talked about the healing powers of stripping down, of baring all, and of expressing this love for her body, just as it is.

Doing the same was one of the most healing things I've ever done.

RELATED: 7 Ways Doing A Boudoir Photo Shoot Turned Me Into A GODDESS

I titled my 29th year "Not 30 Yet," and I spent a lot of time doing things that were geared directly toward taking care of myself: being loving, supportive, and uplifting to that broken girl I had become.

Stripping down was just part of that.

But it was a big part, perhaps mostly because it took the greatest amount of courage for me, as a girl with so much pent-up hatred directed toward her body.

It was the reminder that my body is worth celebrating and that it isn't deserving of the loathing I have felt toward it over the years.

Just seven months after that photo shoot, I was blessed with the serendipitous adoption of my little girl.

A newborn daughter placed in my arms, given to me to love, protect, and empower.

And I was grateful for the lessons that had been learned in taking risks, stripping down, and honoring every inch of who I am, grateful for that year I had spent loving myself and my body in the same way I hope she will one day love herself and hers.

Subscribe to YourTango's newsletter to keep up with us for FREE

Leah Campbell is a freelance writer and editor living in Anchorage, AK. A single mother by choice after a serendipitous series of events led to the adoption of her daughter in 2013, she is also author of the book, Single Infertile Female.

Samsung's mobile sales are up 51 percent over...

Why I Talk About Feminism on First Dates