Home /
News /
Why the 1976 U.S. swine flu vaccinations may offer lessons for the COVID-19 pandemic

Why the 1976 U.S. swine flu vaccinations may offer lessons for the COVID-19 pandemic

For Pascal Imperato, a communicable disease epidemiologist who in 1976 was in charge of immunizing New York City against a potential swine flu epidemic, the effort to vaccinate the population against COVID-19 feels like a familiar challenge.

"We were going to vaccinate six million people in six weeks," he said in a phone interview. "And we were absolutely certain we could pull it off. And we would have."

Would have, because, ultimately, the largest national immunization program that had ever been undertaken in the U.S. was cut short as the epidemic never materialized, and public skepticism about the program began to mount.

Still, while the COVID-19 pandemic is very real, and the population is much larger, the vaccination program of 1976 may offer some lessons as governments around the world prepare to inoculate the public at large.

"If the program is well organized, mobilizing all of the resources that are capable of administering this vaccine, there [shouldn't] be any problem whatsoever," Imperato said.

In March 1976, the administration of then president Gerald Ford launched a $137 million US nation-wide vaccination program to immunize every American citizen by the end of the year.

The diagnosis of swine flu on a New Jersey army base had led to panic among top U.S. scientists and officials who feared the disease could spread and potentially precipitate a health crisis similar to the deadly Spanish flu outbreak of 1918.

Even though it was cut short, by December 1976 more than 40 million Americans — about one-fifth of the population — had been vaccinated, and about 650,000 in New York City.

Imperato said that on any given day they had about 900 people who were involved in getting the vaccine out to the general public. That included 500 to 600 volunteers who were recruited each day through the city's chapter of the American Red Cross.

University graduates, sanitary inspectors and public health nursing assistants were also hired and trained to use automatic jet injectors and to give cardiopulmonary resuscitation.

Sixty vaccination sites were established in places that included schools and police precincts.

"Anywhere we could," said Imperato, who is the founding dean and distinguished service professor at SUNY Downstate Medical Center School of Public Health. 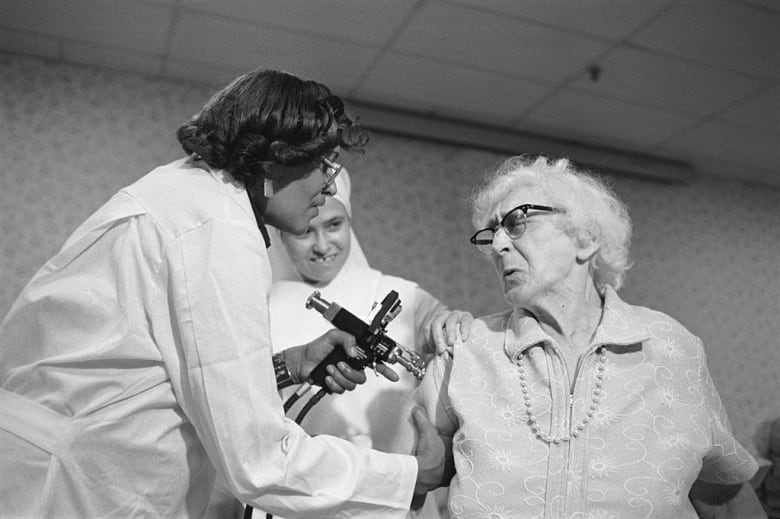 Mary O'Brien, 77, resident of the St. Augustine Home, Chicago, winces as she is inoculated against the swine flu in 1976. (Bettmann Archive/Getty Images)

"This required military organization, if you will, and we were able to put together a team and put into place the people that we needed to bring this about," he said.

A great deal of administrative and clerical support goes into a program of this kind, he said.

"We have to have people register. We had to have as much information about them as possible, because we needed to know who we were vaccinating and if any of them had any reaction. We had to have teams of people checking on adverse events."

Local capacity can be the 'weak link'

Nationwide, however, there  were some logistical problems, said Harvey Fineberg, a physician who was tasked with co-authoring a review into the 1976 Swine flu vaccine program.

The actual immunizations were quite erratic in their frequency in different communities, he said.

"So a lesson that's still relevant today, whether in different provinces in Canada or different states and counties and the U.S., is the local capacity," he said.

"That last mile, getting the immunization into the arms of the recipients, that's the weak link in the chain."

What made the difference  was the degree of organization and capacity of the public health departments in each community to plan and administer the vaccine, Fineberg said.

"So it wasn't that it was only cities or only rural, rich or poor, it boiled down to ability to deliver."

As Canada prepares to distribute millions of doses of COVID-19 vaccines in January, Chair of the National Advisory Committee on Immunization Dr. Caroline Quach-Thanh and David Levine, who managed the H1N1 vaccine rollout for Montreal, say this vaccination campaign won't be without challenges. 3:56

But one of the more significant problems of the program was the poor job officials did in communicating to the public when headlines emerged linking potential adverse effects to the vaccine, experts say.

"There are definitely — and this is going to be true this coming year — there will be coincident events," Fineberg said.

During the 1967 vaccination program, three elderly people in Pittsburgh had heart attacks after receiving their vaccine. The publicity and headlines it generated led to a handful of states suspending their vaccination programs while they investigated a potential association, said George Dehner, an associate professor of history at Witchita State Univeristy and authour of Influenza: A Century of Science and Public Health.

While no link to the vaccination was found, polls at the time showed a significant decrease in the number of people who said they would get the vaccine because they feared some adverse effect, Dehner said. 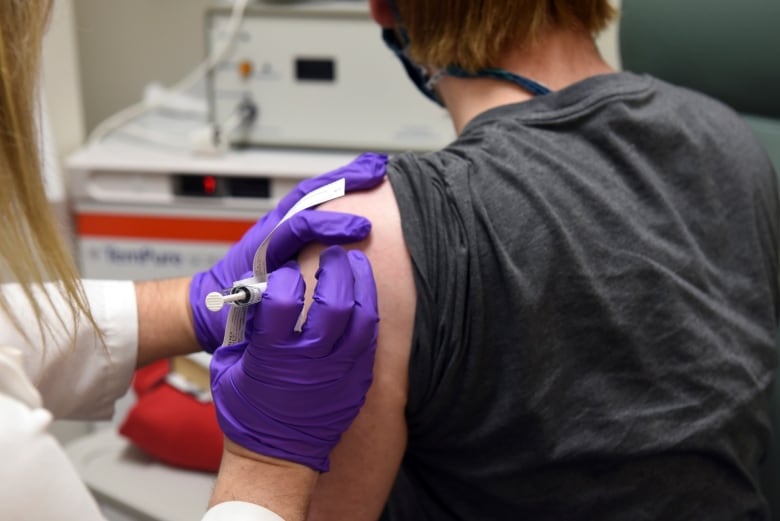 A patient takes part in Pfizer's COVID-19 vaccine clinical trial in May. On Sunday, a U.S. health official said the country's first immunizations could begin on Dec. 12. (University of Maryland School of Medicine/File/The Associated Press)

There will be a certain expected death rate of people of a certain age on any given day, Pascal said. And what one has to look at is the death rate above the expected rate when running an immunization program.

"And so the CDC in this particular case did not do a good job of anticipating that and explaining that," Dehner said.

But the vaccination rollout also saw dozens of people come down with the rare neurological disorder Guillain-Barre syndrome at a much higher rate than would be expected. Unlike the heart attacks, where no link was found, a scientific review has found there was an increased risk of Guillain-Barre syndrome after the swine flu vaccinations, according to the CDC. The exact reason for this link remains unknown.

In a 2009 interview with the The Bulletin, the health journal of the World Health Organization, Fineberg said those cases wouldn't have been "a blip on the screen had there been a pandemic but, in the absence of any swine flu disease, these rare events were sufficient to end the programme."

Focus on science, not politics

When Guillain-Barre syndrome increased, some members of the public "became very skeptical and saw the whole thing as politically based, and not science-based," said Richard Wenzel, emeritus chairman and professor of the Department of Internal Medicine at Virginia Commonwealth University.

"There was a concern that maybe politics was driving some public health responses."

"One of the things that I would say we're still trying to learn is policy should be scientifically based. What I mean is that whoever gives the message has to say, 'Here's what we know, here's what we don't know. And here are the assumptions we're making currently that guide our policy.

"That sounds simple, but it's rarely done, even today."

Canada-U.S. border rules: Why some travellers...

2 No Time To Die's Ana de Armas Reveals The Reason She Got...

5 This is What the Women of Star Trek are up to Years After...

6 Sonos' Roam can reportedly pass music to other speakers