The solutions: as diverse as the nations gathered virtually for the 75th UN General Assembly.

With the event reduced to recorded speeches this year because of COVID-19, leaders are using the General Assembly as an opportunity to depict the pandemic from the vantage points of their nations and themselves, and present their visions of efforts to fight the virus.

Some of the ideas that emerged from the speeches Tuesday, the first day of the general debate were:

Not surprisingly in such speeches, aimed at both domestic audiences and the international community, heads of state presented their own efforts in favourable light while sometimes harshly criticizing other countries or taking jabs at the United Nations.

Leaders vow to work together as world approaches 1 million deaths

This year's theme — "reaffirming our collective commitment to multilateralism" — comes during a period of extreme physical isolation between citizens in respective countries and between nations, a period when international travel has declined sharply. It also comes as the world approaches one million deaths from the virus since December, adding urgency to the search for solutions.

"The leaders of our nations are not personally present. They will not be able to interact with each other," General Assembly president Volkan Bozkir, a Turkish diplomat, said in opening Tuesday's session. "But our need for deliberation is higher than ever."

Despite this year's theme, speeches by leaders of some of the world's most powerful nations were peppered with initiatives that sounded more go-it-alone than collaborative, though all gave nods to working together.

Russian President Vladimir Putin went so far as to offer UN personnel a coronavirus vaccine his country is developing. Chinese President Xi Jinping said a handful of vaccines were in Phase 3 of clinical trials and that Beijing would give millions to a UN fund to combat the virus. 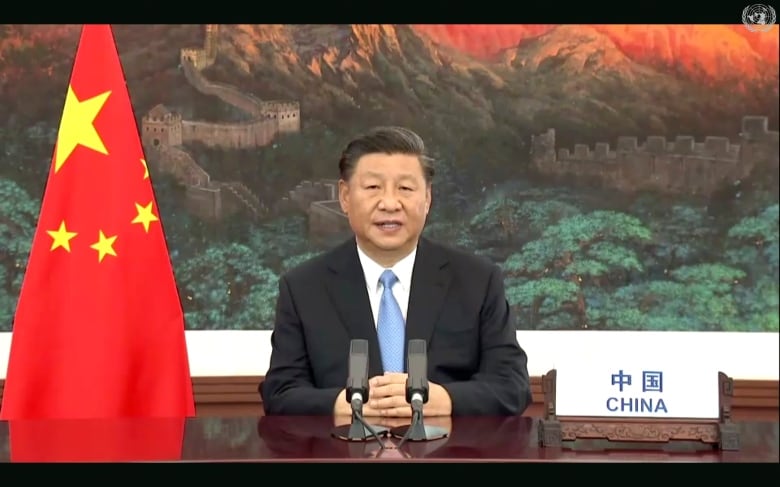 Speaking to the UN General Assembly in a pre-recorded message Tuesday, Chinese President Xi Jinping said no solutions could be found by burying 'one's head in the sand like an ostrich,' an apparent criticism of the U.S. response to the COVID-19 pandemic. (UNTV/The Associated Press)

"1.4 billion Chinese, undaunted by COVID-19, have made all efforts to control the virus," Xi said, underscoring how China had drastically slowed the spread after the virus was discovered in the Chinese city of Wuhan.

Turkish President Recep Tayyip Erdogan, while lauding his own nation's co-operation and calling for nations to work together, took a swipe at how the UN functions. Earlier this year, Erdogan said, it took months for the Security Council to even discuss the pandemic.

Saeed Khan, director of global studies at Wayne State University in Detroit, Mich., said the coronavirus has "become a metaphor for globalism versus nationalism."

"The greatest resistance is coming from regimes that are hyper-nationalistic," he said.

Presidents of China and Cuba swipe at the U.S.

To be sure, the pandemic has brought out simmering divisions between nations, providing new things over which to argue.

U.S. President Donald Trump told the assembly that the U.S. had "waged a fight against a great enemy, the China virus," and called on the UN to hold China accountable for the virus and other things.

Trump, campaigning for re-election ahead of November's election, did not mention that on Tuesday the U.S. reached an unwanted milestone — 200,000 coronavirus deaths, by far the largest number of any country in the world — or that polls show a majority of Americans disapprove of his handling of the pandemic.

Xi said any "politicizing or stigmatizing" should be avoided, that "major countries should act like major countries" and no solutions could be found by burying "one's head in the sand like an ostrich," not-so-subtle criticisms of America's response.

Cuban President Miguel Diaz-Canel Bermudez lamented how much COVID-19 had altered daily life, then argued that U.S. policies, unchecked capitalism and military spending were the roots of many problems worldwide. 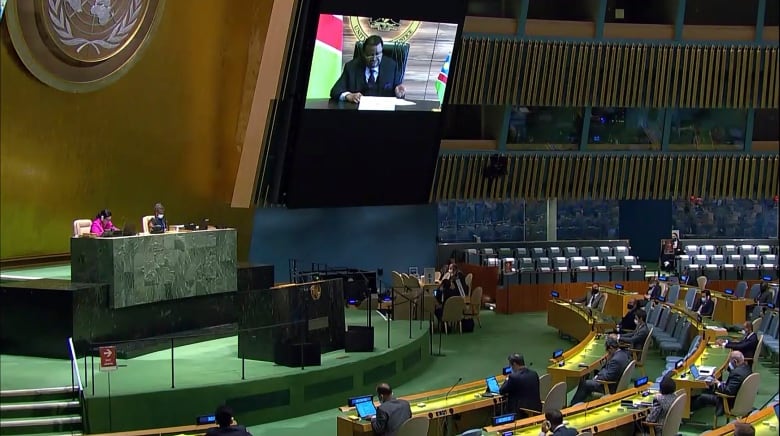 Richard Caplan, a professor of international relations at Oxford University in Britain, said that although there were "assaults" on multilateralism around the pandemic, particularly in the form of "vaccine nationalism," there were also indications that COVID-19 could lead to more co-operation, even among longtime foes.

Caplan noted that earlier this year, Israel and the Palestinian Authority co-ordinated efforts between health ministries. Thousands of Palestinian workers were able to remain in Israel for longer periods so as to slow the spread of the virus.

"Unfortunately, this unprecedented practical co-operation broke down, in part because of political tensions associated with the Trump (Middle East) peace plan and Israel's moves toward annexation" of Palestinian territories, Caplan said.

There is also the COVID-19 Vaccines Global Access Facility, or COVAX, a grouping of more than 150 countries pooling resources around combating the disease and distribution of a future vaccine. The U.S. is not participating in the effort, led by the World Health Organization. Trump says WHO is influenced heavily by China and that joining the effort could constrain U.S. efforts to develop a vaccine.

Some leaders identified other virus-related problems that needed tackling. 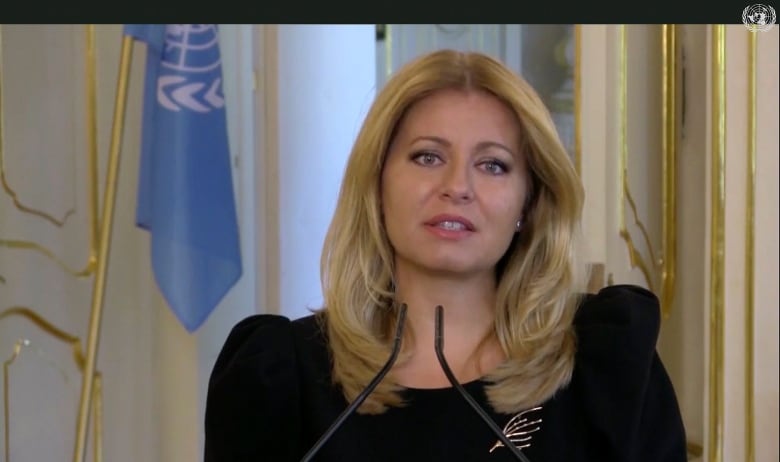 Vaccine will benefit all countries

South Korean President Moon Jae-in expressed concern about possible second and third waves of the coronavirus. Like many others, he also noted the damage to economies worldwide.

"Like a tsunami that follows an earthquake, economic aftershocks are sweeping us," he said.

On the question of reviving the world economy, few concrete suggestions surfaced. Most leaders seemed to argue that a vaccine was the only viable long-term solution, though many did cite concern for local economies as a way to defend their handling of the pandemic at home.

At a time when heads of state can't meet in person, and several don't appear interested in deepening ties, it is unclear how much progress the UN may make during this year's assembly, which continues through Sept. 29.

When it comes to a vaccine, however, it probably doesn't matter in the long run how much progress is made toward multilateralism at the assembly, said Naim Salem, professional of international relations at Notre Dame University in Beirut.

"Multilateral co-operation is optimal," Salem said. "But if a vaccine proves to be effective in one country, it will spread or be taken up by other countries."

Tekashi 6ix9ine’s kidnapper compares himself to...

Storage may not be exciting, but Pure Storage’s...