The Chinese city of Wuhan, where the coronavirus was first detected late last year, has tested nearly 10 million people in an unprecedented 19-day campaign to check an entire city.

It identified just 300 positive cases, all of whom had no symptoms. The city found no infections among 1,174 close contacts of the people who tested positive, suggesting they were not spreading the virus easily to others.

That is a potentially encouraging development because of widespread concern that infected people without symptoms could be silent spreaders of the disease.

"It not only makes the people of Wuhan feel at ease, it also increases people's confidence in all of China," Feng Zijian, vice-director of China's Center for Disease Control and Prevention, told state broadcaster CCTV.

There is no definitive answer yet on the level of risk posed by asymptomatic cases, with anecdotal evidence and studies to date producing conflicting answers.

Wuhan was by far the hardest hit city in China, accounting for more than 80 per cent of the country's deaths, according to government figures.

Almost every above age 5 tested

A city official announced Tuesday that the city completed 9.9 million tests from May 14 to June 1. If those tested previously are included, virtually everyone above the age of 5 in the city of 11 million people has been tested, said Li Lanjuan, a member of a National Health Commission expert team.

"The city of Wuhan is safe," she said at a news conference with city officials. 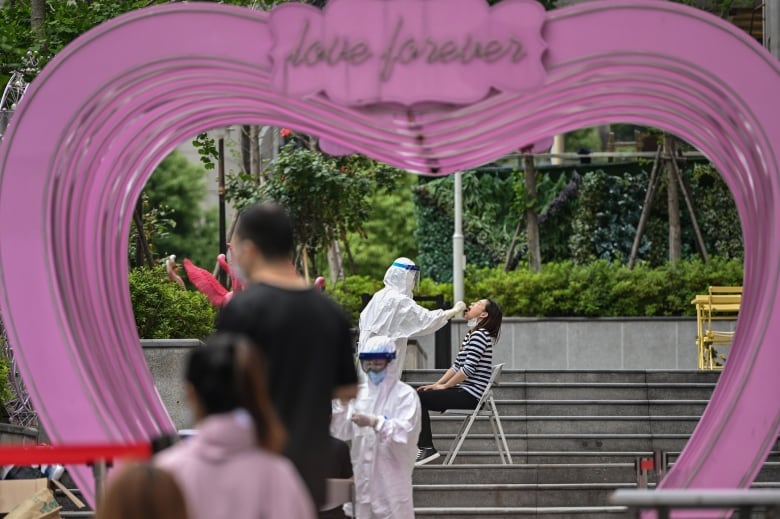 A medical worker takes a swab sample from a woman to be tested for the novel coronavirus, while people wait in line for testing next to a shopping mall in Wuhan on May 16. (Hector Retamal/AFP via Getty Images)

The campaign was launched after a small cluster of cases was found in a residential compound, sparking concern about a possible second wave of infections as Wuhan emerged from a two-and-a-half month lockdown.

The industrial city on the Yangtze River in central China spent 900 million yuan (about $169 million Cdn) on the tests, the official Xinhua News Agency said. It quoted Executive Deputy Mayor Hu Yabo as saying the cost was "totally worthwhile" to reassure residents, lifting a "psychological lockdown."

Clarence Tam, an assistant professor of public health at the National University of Singapore, called the results reassuring but said more information is needed about the value of this kind of mass screening when the risk is already low.

He noted that the tests, while generally accurate, sometimes give a positive result for uninfected people, and the very low number in Wuhan was well within the range of expected error.

"As more countries adopt mass screening strategies, a challenge will be to try and minimize the chances of detecting false positives," Tam said in an email response to The Associated Press. "This has some implications, because in Wuhan for example, those who tested positive and more than 1,000 of their contacts were quarantined."

The rapid testing of so many people was made possible in part through batch testing, in which samples from up to five people are mixed together, Xinhua reported. If the result is positive, then the people are individually tested.

National resources were also mobilized to help, said Wang Weihua, deputy director of the Wuhan Health Commission, according to Xinhua. Together, these efforts raised Wuhan's daily testing capacity from 300,000 to more than one million, she was quoted as saying.

Bruce Springsteen Ruminates On America And Its...

6 SAG-AFTRA Rescinds “Do Not Work” Order On Michael Bay’s...

10 Genies creates an investment arm for companies using its...