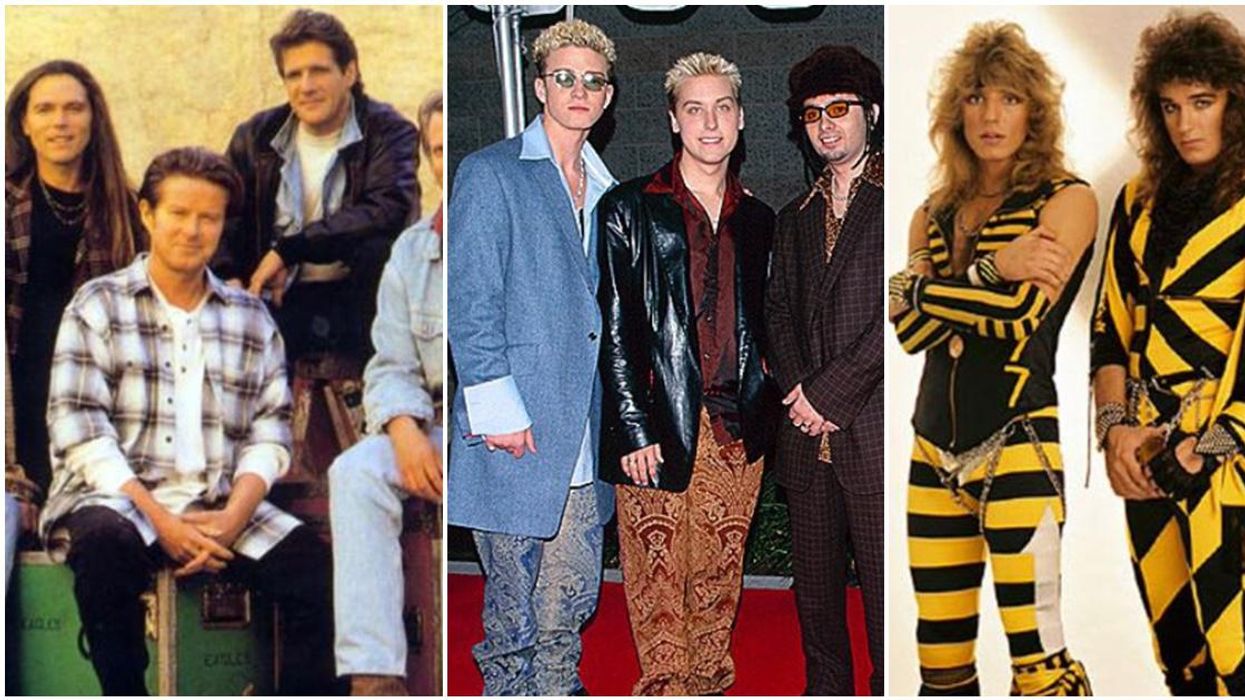 Sportswriter and podcaster Spencer Hall shared a 1994 photo of the Eagles on Twitter Wednesday and it made anyone who lived through the '90s cringe. "Try to find a worse-dressed band than the 1994 edition of the Eagles, it's not possible," he captioned the photo.

The photo looks like the epitome of 1994 mall fashion. It reeks of "Melrose Place," The Gap, and Anchor Bay. What's worse is that it appears as though the 40-somethings in the photo are trying to look like a hip, flannel-wearing grunge band of the time, minus the edge.

try to find a worse-dressed band than the 1994 edition of the Eagles, it's not possible https://t.co/WdsbPJ89G5

The thing about flannel in 1994 is that you had to buy it used at the Goodwill to show your solidarity with working-class people of the Pacific Northwest. This look is just too off-the-rack to give Glenn Frey and friends any credibility.

Who thought it was a good idea for Frey to rock a leather jacket on top of an open-faced denim shirt? Or for Don Henley to actually wear a henley?


The tweet sparked off a great photo challenge where people posted shots of bands from the past six decades to compete against the Eagles' uninspired fashion.

The biggest competitor for the Eagles' crown was Rush who had an ill-suited Kimono phase in the '70s.

Rush themselves have disavowed the garments that they wore on the back of the 2112 album. Good for them. I wish the Eagles would show a similar display of humility by condemning their fashion crime against humanity.

Eagles weren't the only band with a bad look in the '90s. Color Me Badd, the folks behind the boot-knocking jam of the decade "I Wanna Sex You Up," had some real fashion challenges, too. The band looked like impersonators from other bands. One guy looks like a fake Kenny G. Another guy looks like a George Michael impersonator. Mili or Vanili is in there somewhere. The dude in the overalls looks like he could be in New Kids.

Not a band in the traditional sense, but Color Me Badd must have raided my friends' moms' closets around 1991 or 1992 for this shot. pic.twitter.com/sCAxTBzaik
— applescruff909 (@applescruff909) September 16, 2021

All-4-One had similar fashion challenges but at least they were their own men. Nothing says 1993 like the flannel-hoodie combo jacket.

A few years later, another boy band went all-in on the long jacket craze and the look hasn't aged well.

It's like if Elton John wrote the code for the Matrix. pic.twitter.com/clMxT0PCu7
— Griffin Bennett (@GriffinWB) September 16, 2021

The "Gish"-era Smashing Pumpkins should have been called Rayon Catastrophe.

The Grateful Dead lost their sense of style when Pigpen passed away in 1973. But Bobby Weir really took the band to a new low in the '80s when he started rocking Daisy Dukes on stage.

The hair metal scene in the '80s spawned a million bad looks. But Stryper with their bumble-bee-colored spandex is so terrible it's physically disorienting.

Chicago in the '80s provided divorced dads with a lot of fashion options.

not possible you say?

*Chicago circa 1985 bursts thru the wall like the Kool-Aid man* pic.twitter.com/VHEpXBvYHQ
— [email protected] (@TheGlare_TM) September 16, 2021

The good ol' boys from Kansas took a turn for the dark in early the 2000s. They look less like a country band and more like a hangman and his recently-assembled posse.

The most recent incarnation of the Brian Wilson-less Beach Boys looks like a group of aging "hip" pastors at a megachurch in Orange County, California.

The Beach Boys current tour photo would like a word. God only knows who thought this looks good. pic.twitter.com/if3z5iV1WW
— BLM (@drunkcritic1977) September 16, 2021

Bad looks didn't just happen in the past. Imagine Dragons are here to show you that bad band fashion can happen without the benefit of hindsight.

Maybe the Eagle's fashion sense was just a reflection of their middle-of-the-road musical taste as well?

Google and Microsoft had the most...

It look less than a day for every cat to be...