As international tension simmered this week over Taiwan, the Pacific Ocean saw a not-so-subtle display of allied military solidarity — one that included a Canadian frigate.

The assembly, which included 17 ships from six different countries, sent an unmistakable message to China.

In an exclusive interview, the commander of the United Kingdom Carrier Strike Group 21 (CSG21) task force told CBC News that the one-day exercise was a demonstration of solidarity and of how western allies can work seamlessly together.

"It's an important message for those here that nations like ourselves really do believe in the freedom of navigation, in the freedom of trade and really are alarmed at the militarization of the area," said Royal Navy Commodore Steve Moorhouse.

He said he has no doubt that the message was understood.

"Chinese intelligence-gathering vessels were in the region," he said. "So I have absolutely no doubt the message would have been relayed back to China quite quickly."

The exercise was a milestone in several ways. Since the end of the Second World War, the Japanese have not possessed aircraft carriers and their military has maintained a defensive posture. Last weekend's fighter jet trial saw a US Marine F-35B land on and take off from the helicopter carrier JS Izumo — making it a de-facto fixed-wing aircraft carrier.

The exercise was also one of the largest gatherings of aircraft carriers in the Pacific in decades.

Commander Doug Layton, the skipper of HMCS Winnipeg, told CBC News that the sight of so many big warships and so much firepower gathered in one space left the sailors aboard his frigate in awe.

"You should have seen the looks on their faces," Layton said, adding that at one point, "twelve fighter jets overflew us, a combination of F35s and F18s." 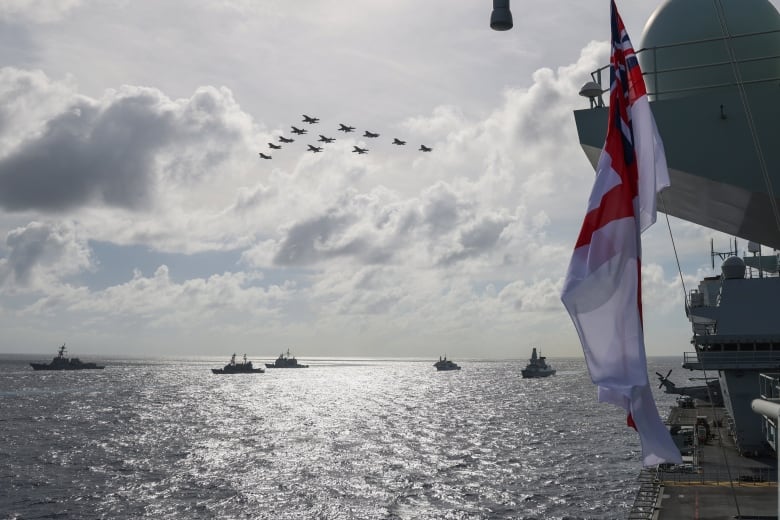 The Canadian frigate was edged in beside and escorting HMS Queen Elizabeth, the Royal Navy's newest aircraft carrier, which is on a world tour.

"I've been in the navy for 20 years and I have never been in such a showcase of naval power," said Layton.

The British have been largely absent from the Pacific Ocean for nearly two decades. Moorhouse said the Royal Navy has been re-learning how to operate in that vast expanse. The voyage is helping to lay the groundwork for the semi-permanent stationing of two British warships in the region, he added. 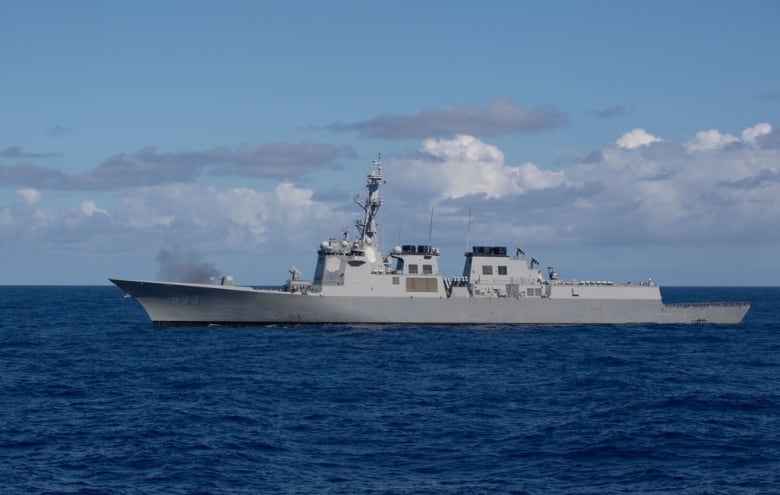 While the exercise was taking place, China's People's Liberation Army Air Force was in the midst of a series of sorties into Taiwan's air defence zone.

Over several consecutive days, some of Beijing's most advanced fighters and bombers skirted the disputed island's actual airspace — within the buffer zone around it.

As many as 150 planes took part in the incursions.

The flights started on Friday, China's national day, and were described by the U.S. State Department as "provocative" and "destabilizing."

Many experts said the timing of the flights was not surprising — but the number of warplanes involved was.

Julie Clark, a fellow with the Canadian Global Affairs Institute who teaches at the University of Waterloo, said Beijing likely felt compelled to put a forceful display after the recent announcement of a security arrangement involving the U.S., the U.K. and Australia, which will see the latter acquire nuclear submarine technology.

The incursions "seem to be a strong message to the West — particularly to the United States with some of their recent moves with strategic security alliances — to indicate they're not a country in which they can be pushed around," said Clark.

On Wednesday, it was announced that the presidents of the U.S. and China will hold a virtual summit later this year.

Clark said that event will be a very important opportunity to reduce the growing tensions in the region. Many of China's neighbours have been rattled by Beijing's military buildup and provocative actions — but equally, Clark said, those countries are being given a stark choice as allied military displays become more noticeable.

"There have been moves from other Asian countries — or at least pressure on them — to take a side," she said.