The white gunman accused of massacring 10 Black people in a racist rampage at a Buffalo, N.Y., supermarket taunted law enforcement online last month and visited the city back in March, investigators said Monday.

Payton Gendron, 18, began posting threads on the social media platform Discord about body armour and guns, and last month made provocative remarks about federal law enforcement, the FBI agent in charge for Buffalo, Stephen Belongia, said on a call between law enforcement officials and private-sector and university partners. The Associated Press obtained a recording of the call.

Meanwhile, Buffalo Police Commissioner Joseph Gramaglia disclosed that Gendron, who lives about 320 kilometres away in Conklin, N.Y., had been in Buffalo two months ago. Gramaglia declined to say more about that trip.

The police commissioner also told CNN that Gendron planned to keep on killing if he had escaped the scene and even talked about shooting up another store.

"He was going to get in his car and continue to drive down Jefferson Avenue and continue doing the same thing," the commissioner said.

The commissioner's account was similar to portions of a racist 180-page document, purportedly written by Gendron, that said the assault was intended to terrorize all non-white, non-Christian people and get them to leave the country. Federal authorities were working to confirm the document's authenticity.

Authorities said Gendron wielded an AR-15-style rifle, wore body armour and used a helmet camera to livestream the bloodbath. He surrendered inside the supermarket and was arraigned on a murder charge over the weekend. He pleaded not guilty and was jailed under a suicide watch.

Federal prosecutors said they are contemplating federal hate crime charges in the case.

WATCH | Why the gunman targeted that supermarket:

How the Buffalo supermarket served as a 'lifeline' in the community

Buffalo Common Council president Darius Pridgen tells CBC News why the people in his neighbourhood fought to get the supermarket where 10 Black people were killed Saturday, and how it served as a lifeline and hub for so many in the community.

Former Buffalo fire commissioner Garnell Whitfield Jr., who lost his 86-year-old mother, Ruth Whitfield, in the shooting, asked how the country could allow its history of racist killings to repeat itself.

"We're not just hurting. We're angry. We're mad. This shouldn't have happened. We do our best to be good citizens, to be good people. We believe in God. We trust Him. We treat people with decency, and we love even our enemies," Whitfield said at a news conference with civil rights attorney Ben Crump and others.

"And you expect us to keep doing this over and over and over again — over again, forgive and forget," he continued. "While people we elect and trust in offices around this country do their best not to protect us, not to consider us equal." 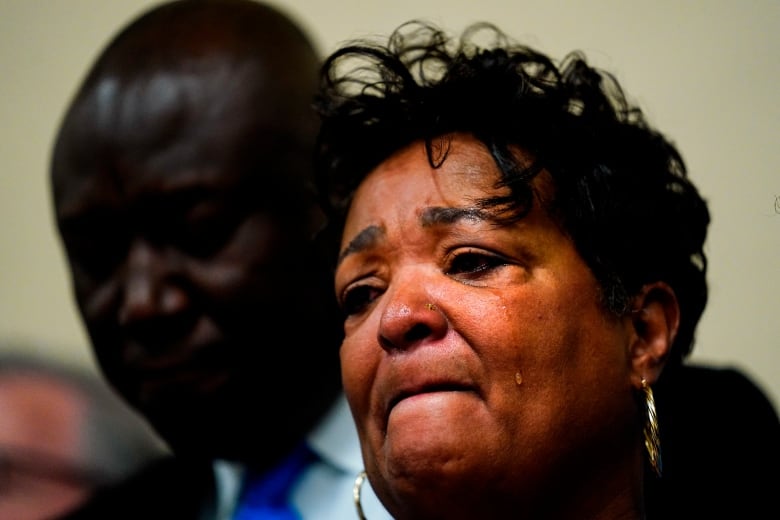 Angela Crawley — the daughter of Ruth Whitfield, one of the victims — speaks during a news conference in Buffalo, on Monday. (Matt Rourke/The Associated Press)

Whitfield's mother was killed after making her daily visit to her husband in a nursing home.

"How do we tell him that she's gone? Much less that she's gone at the hands of a white supremacist? Of a terrorist? An evil person who is allowed to live among us?" Whitfield said.

The victims also included a man buying a cake for his grandson; a church deacon helping people get home with their groceries; and a supermarket security guard.

"This was an act of domestic terrorism," Crump told reporters. "And we have to define it as such. We can't sugarcoat it. We can't try to explain it away talking about mental illness. No."

WATCH | 'An act of domestic terrorism':

Lawyer Ben Crump says the mass shooting at a Buffalo supermarket that left 10 Black people dead was an act of racism and bigotry that must be treated as an act of domestic terrorism.

The bloodshed in Buffalo was the deadliest in a wave of weekend shootings, including at a California church and a Texas flea market.

Messages were left with Gendron's attorneys Monday. No one answered the door at his family's home in the morning, and relatives did not respond to messages.

Law enforcement officials said Sunday that New York State Police troopers had been called to Gendron's high school last June for a report that the then-17-year-old had made threatening statements. The threat was "general" in nature and not related to race, Gramaglia said.

Gendron had threatened to carry out a shooting at Susquehanna Valley High in Conklin around graduation, according to a law enforcement official who was not authorized to discuss the investigation publicly and spoke on condition of anonymity.

Gramaglia said Gendron had no further contact with law enforcement after a mental health evaluation that put him in a hospital for a day and a half.

It was unclear whether officials could have invoked New York's "red flag" regulation, which lets law enforcement, school officials and families ask a court to order the seizure of guns from people considered dangerous. Authorities would not say when Gendron acquired the weapons he had during the deadly attack.

Federal law bars people from owning guns if a judge has determined they have a "mental defect" or they have been forced into a mental institution. An evaluation alone would not trigger the prohibition. 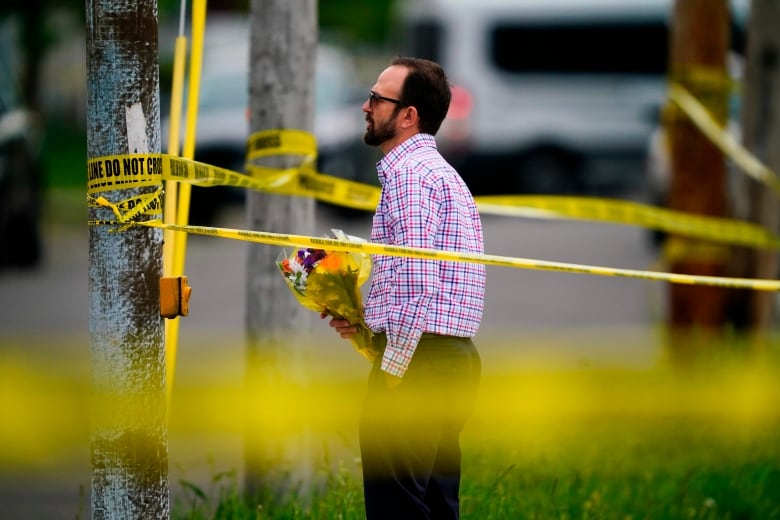 A man brings flowers to the scene of the shooting Monday. (Matt Rourke/The Associated Press)

The long list of mass shootings in the U.S. involving missed opportunities to intervene includes the 2018 massacre of 17 students at a high school in Parkland, Fla., where law enforcement officials had received numerous complaints about the gunman's threatening statements, and the killings of more than two dozen people at a Texas church in 2017 by a former air force member who was able to buy a gun despite a history of violence.

At the White House, U.S. President Joe Biden, who planned a visit Tuesday to Buffalo, paid tribute to one of the victims, security guard and retired police officer Aaron Salter. Salter fired repeatedly at the attacker, striking his armour-plated vest at least once before being shot and killed. Biden said Salter "gave his life trying to save others."

The House GOP leadership has enabled white nationalism, white supremacy, and anti-semitism. History has taught us that what begins with words ends in far worse. @GOP leaders must renounce and reject these views and those who hold them.

Authorities said that in addition to the 10 Black people killed, three people were wounded: one Black, two white.

Gendron researched the neighbourhood's demographics and conducted reconnaissance before the attack, investigators said. Mayor Byron Brown said the gunman "came here with the express purpose of taking as many Black lives as he possibly could."

Most of the victims were elders, a distinction that historically carries weight in Black communities. The same was true for several of the nine Black people killed in 2015 in a racist attack at a historic Black church in Charleston, S.C.

The Buffalo gunman livestreamed the attack on Twitch, prompting scrutiny of how fast social platforms react to violent videos.

Portions of the video circulating online showed the gunman killing multiple shoppers in less than a minute. At one point, he trains his weapon on a white person cowering behind a checkout counter, but says, "Sorry!" and doesn't shoot. Screenshots purporting to be from the broadcast appear to show a racial slur against Black people scrawled on his rifle.