Home /
NEWSiNi /
Adult Son Moves Back With Parents Because He Can’t Afford Rent, Flips Out When Dad Sets Rules For Him

Adult Son Moves Back With Parents Because He Can’t Afford Rent, Flips Out When Dad Sets Rules For Him

“As long as you live under my roof, you live according to my rules.” This cliche, often said by parents in movies and on TV, sounds fair and decent overall, doesn’t it? After all, if you don’t pay for rent or utilities, the very least you could do would be to do some chores and listen to your parents about what they’d prefer you (not) to do at home. (As long as they’re being objectively reasonable, of course.)

Redditor ChrisThrow367 shared a pickle of a story with the AITA community about how his 23-year-old son, Chris, moved back home after graduating college. According to the dad, his son doesn’t pitch in around the house and mooches off his parents. So the dad, the sole breadwinner for the entire family, decided to take matters into his own hands and set some ground rules. Unfortunately, they caused Chris to flip out and sparked a lot of family drama.

You can read the redditor’s full story below, dear Pandas. When you’re done, let us know what you thought of the entire situation. Who do you think was right in this case? What did you think of the dad’s rules? Do you think that Chris should have been more proactive about finding some way to contribute to the family? Share your thoughts in the comment section at the bottom of the post. 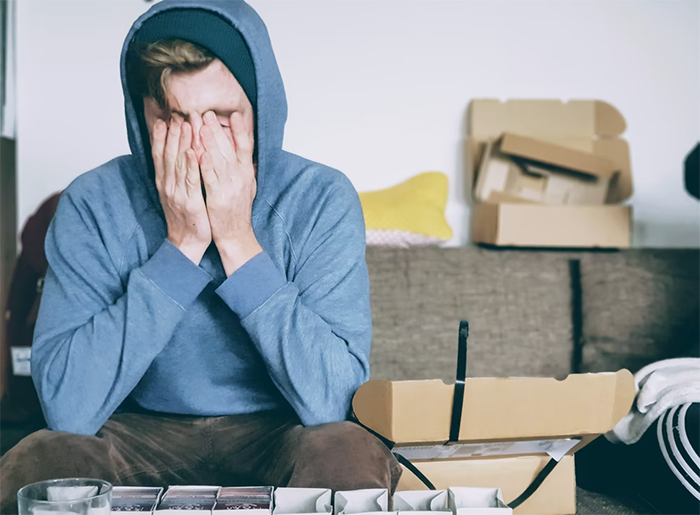 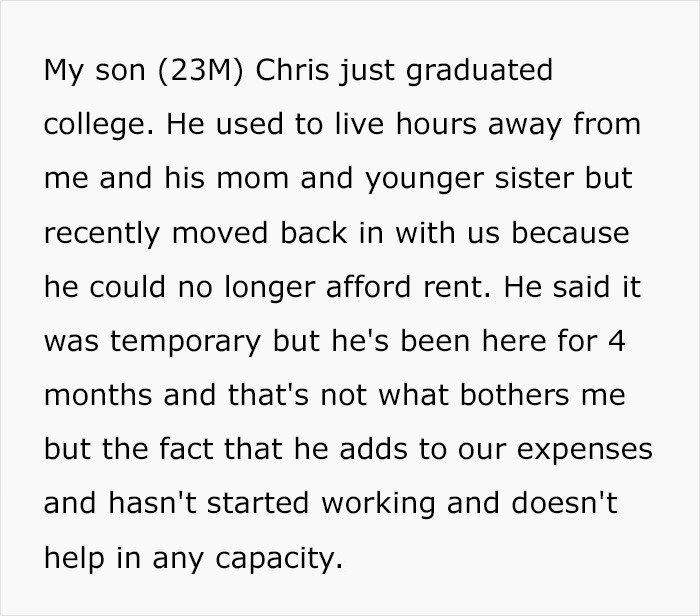 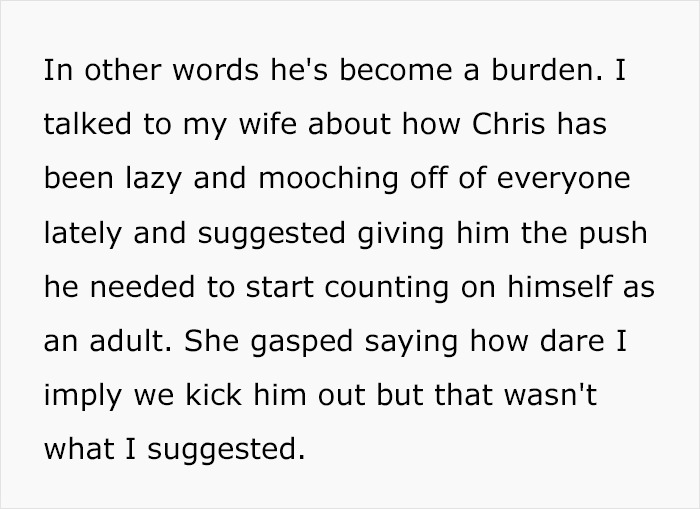 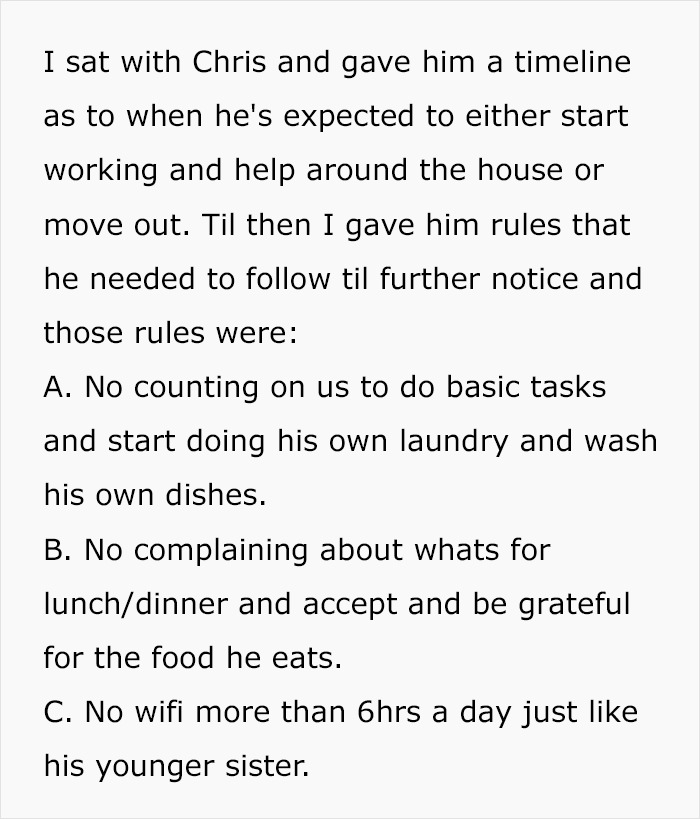 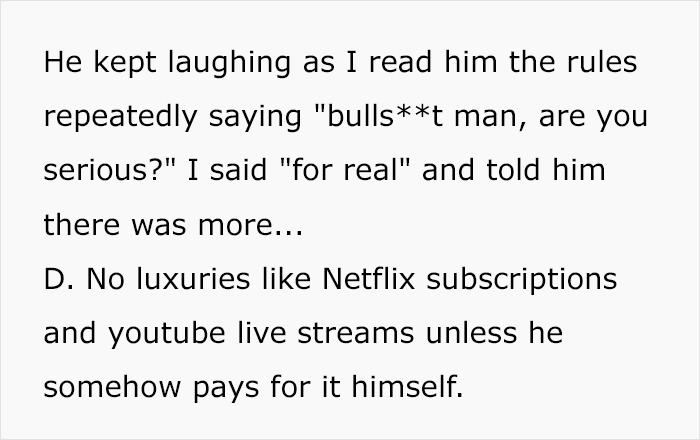 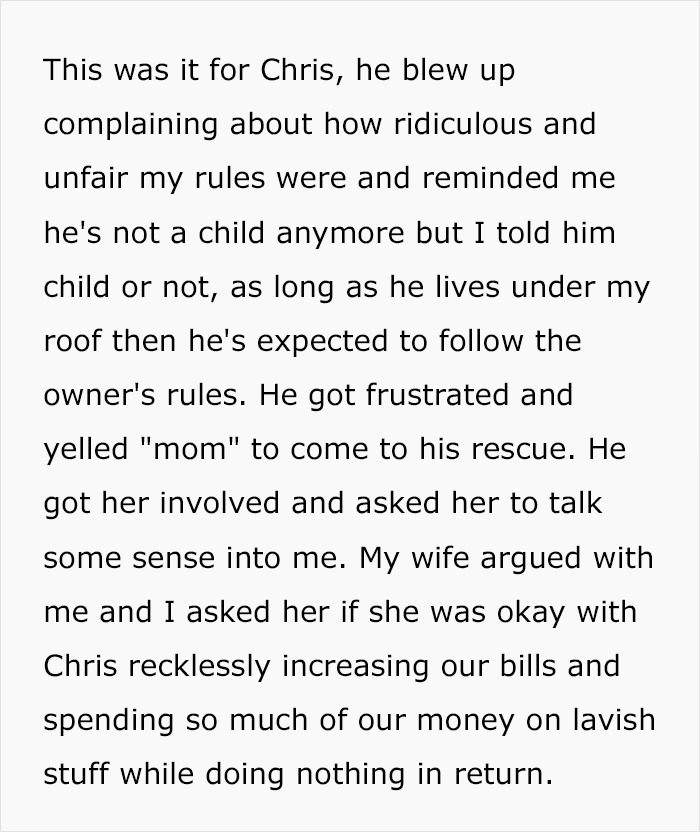 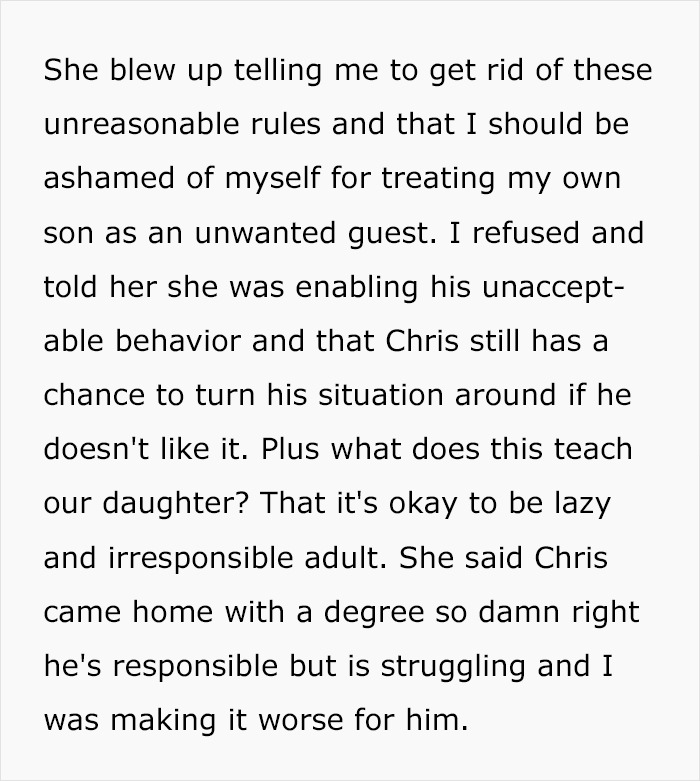 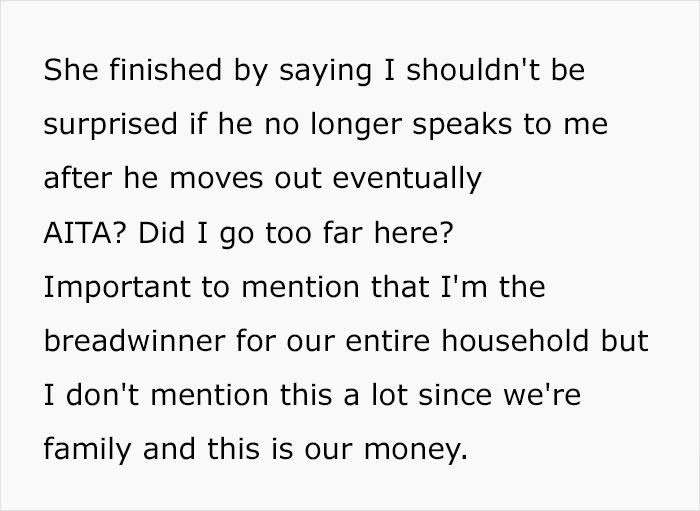 The essence of the argument in the redditor’s family seems to be about finding the right balance between Chris’ independence and everyone else’s support of him. Nobody’s denying that life is rough right now: the Covid-19 pandemic has turned the renting and employment game on its head.

Paying rising rent rates is a challenge for many Americans and Europeans. Meanwhile, finding a job can be difficult depending on what your university major is and what experience you have. Some industries weren’t as resilient to the pandemic as others.

Personally (and don’t let my opinion affect yours), I believe that Chris isn’t entirely to blame for moving back home. The world’s still a mess and it can be hard to find your footing. Let’s face it, most of us have been in similar situations where we desperately need a helping hand from our family and friends. At least, temporarily.

However, at the same time, I also believe it’s incredibly important to be proactive about creating a firm foundation for your life: getting a job, doing basic chores, helping around the house, and offering your support to your own family as much as they’ve supported you. Getting everything handed to you on a silver platter might be comfortable, however, forging your own metaphorical platter shows independence, ambition, and grit. It’s possible to flourish even during the hardest of times.

Though when you look at the rates at which rent is rising, you won’t be surprised that Chris and many young adults like him are asking their parents whether they could move back into their old rooms.

According to USA Today, some cities are seeing jaw-dropping increases in rent prices. For instance, in Boise, Idaho, rent prices have gone up by a whopping 39 percent since March 2020. Yes, Pandas, you read that right: 39 friggin’ percent. It’s horrifying!

The median rent in the US has increased by 11.4 percent in 2021. Compare that to an average of 3.3 percent rent growth in the pre-pandemic years from 2017 to 2019. Meanwhile, rent prices are up 10.3 percent right now compared to late August of last year.

Most redditors were on the original poster’s side, saying that what the dad did was right. Or, as redditor Acheesement so eloquently and sarcastically summed the situation up: “I’m an adult, don’t treat me like a child. That being said, please buy all my food, clean up after me, and make me whatever food I want while I watch Netflix because I’m your special boy.”

However, not everyone was on the same page. Some redditors shared their opinions about how the dad’s rules were more about ‘punishing’ his son rather than helping him stand on his own two feet. But what do you think, dear Readers? We can’t wait to see what you make of all this drama.

Most redditors thought that the dad did nothing wrong. Here’s what they had to say 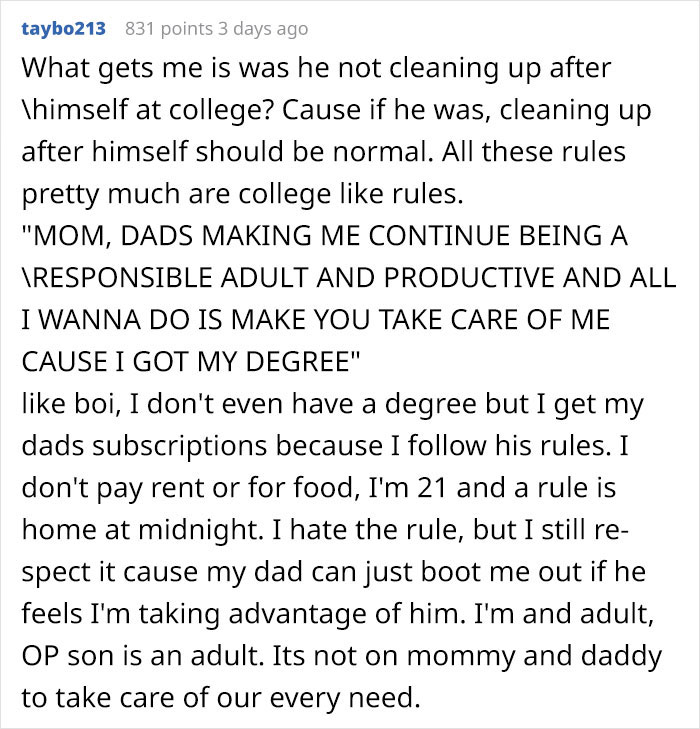 However, some redditors had a different opinion about how the entire situation was handled 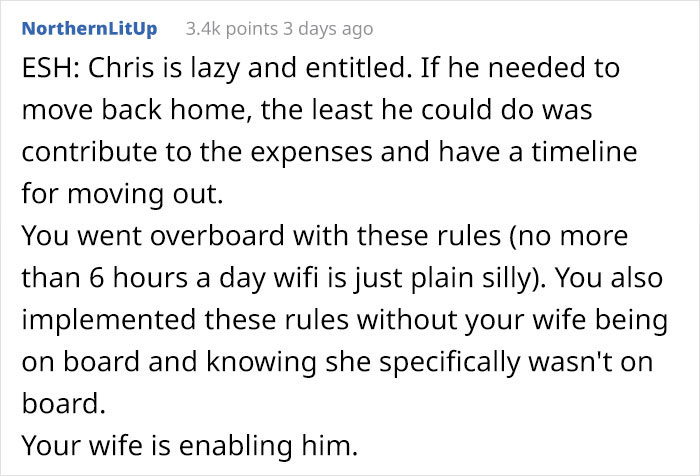 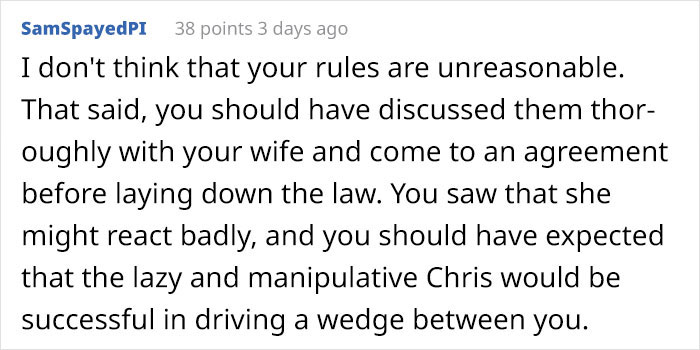 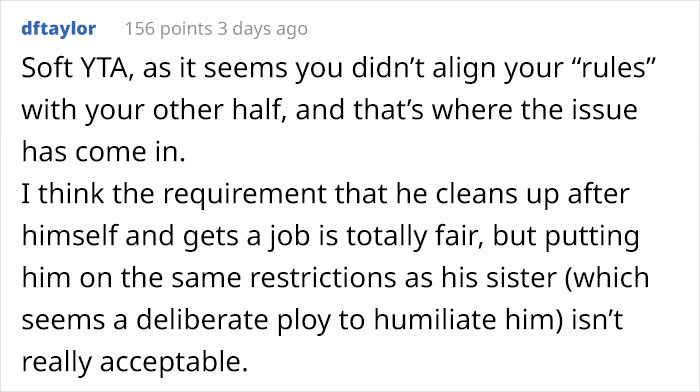 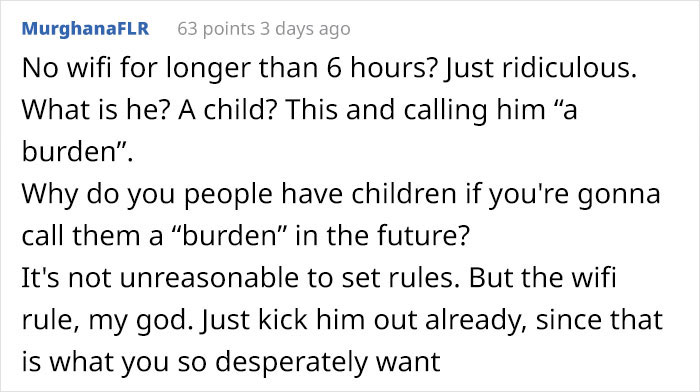 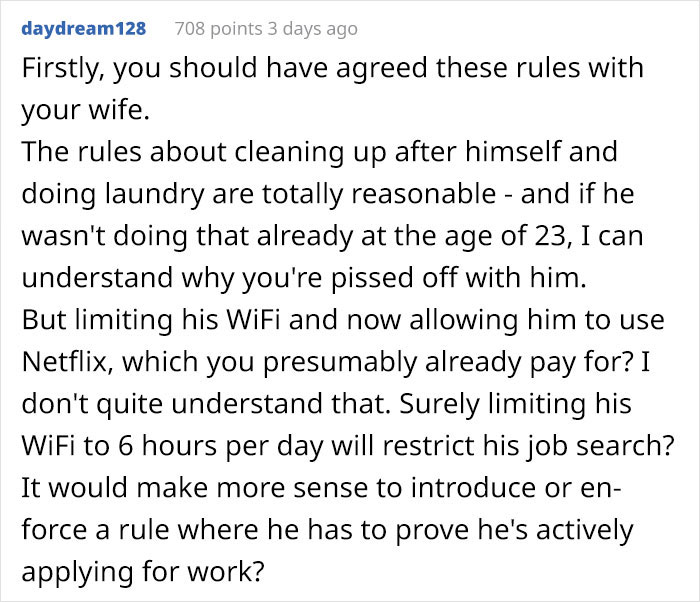 The post Adult Son Moves Back With Parents Because He Can't Afford Rent, Flips Out When Dad Sets Rules For Him first appeared on Bored Panda.

26 Terrible Job Interviews That Have Left...