Alejandro G. Iñárritu’s next film will be titled Bardo (or False Chronicle of a Handful of Truths), Deadline has learned. The news comes as the five-time Oscar winner wraps production in Mexico City.

The feature penned by Iñárritu and his longtime collaborator Nicolás Giacobone is billed as a nostalgic comedy set against an epic journey. A chronicle of uncertainties where the main character, a renowned Mexican journalist and documentary filmmaker, returns to his native country to face his identity, familial relationships, and the folly of his memories, as well as the past and new reality of his country. 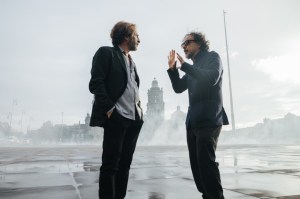 Daniel Jimenez Cacho and Griselda Siciliani star in the film, which marks Iñárritu’s return to his native country, 20 years after Amores Perros. Bardo comes on the heels of his Oscar winners The Revenant and Birdman, as well as his virtual installation Carne y Arena.

Check out a new behind-the-scenes image from the film, released today by the filmmaker, above.