The actors portraying the Fab Four have been revealed for Beatles manager movie Midas Man.

Jonah Lees (The Letter For The King) will play John Lennon, musician Blake Richardson (of band New Hope Cub) will be Paul McCartney, Leo Harvey Elledge (Creation Stories) is George Harrison, and Campbell Wallace will play Ringo Starr. Here are some first-look images of the newcomer actors as the iconic quartet at the famous Abbey Road Studios in London.

Adam Lawrence (Peaky Blinders) has joined cast as Pete Best and, as we revealed earlier this week, Jay Leno (The Tonight Show) has joined as Ed Sullivan.

Midas Man, currently in production, charts Epstein’s role in the creative explosion of the 1960s and his sizable influence on pop music.

As we revealed last week, the project is back in production after an enforced hiatus while producers sought a replacement for director Jonas Akerlund. Sara Sugarman (Confessions of a Teenage Drama Queen) is newly aboard to direct.

Filming began last month in Liverpool but had to be put on hold for three weeks. The shoot will move over to the U.S. early next year. 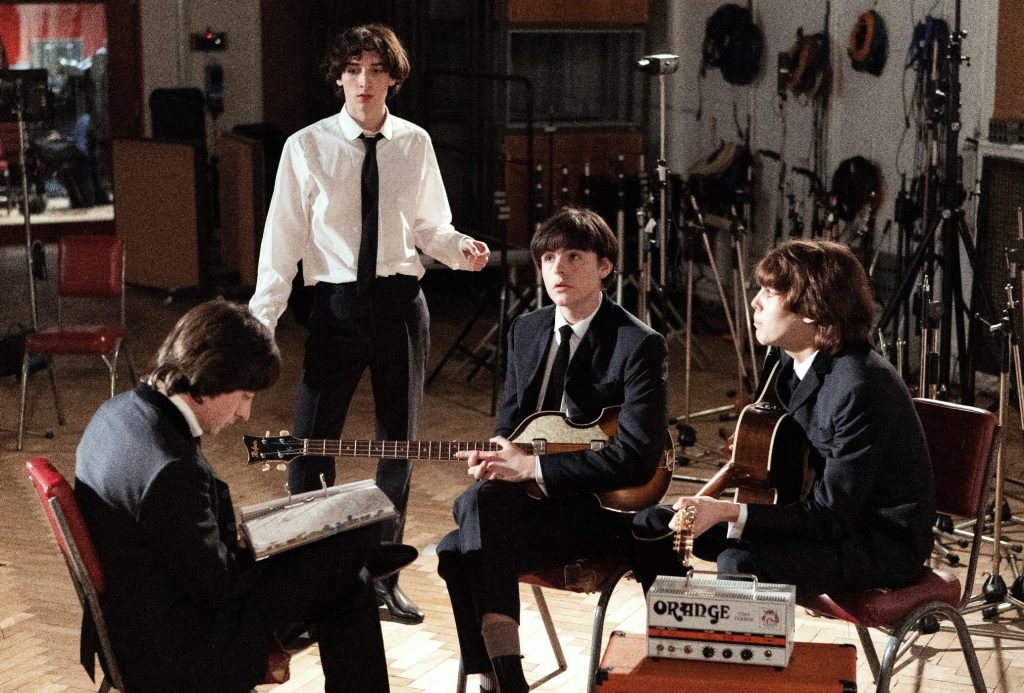 Midas Man is being produced by StudioPow and Trevor Beattie Films. Twickenham Studios Chairman Sunny Vohra and former Lionsgate UK President Nicola Pearcey are among the exec producers. It is being made in association with Er Dong Pictures, which is due to distribute the film in China. Mister Smith is handling world sales and had inked a handful of International deals. The original screenplay is based on a screen story by Brigit Grant and written by Jonathan Wakeham.

Sugarman said today: “The actors playing the Beatles are an extraordinary group they ooze that very visceral feeling of the 60’s, are charming, playful, and so authentic and I have no doubt that Jay Leno will capture the essence of Ed Sullivan perfectly. His own experience as an American television host will bring forward a natural, and accurate portrayal and add an incredible element of modern showbiz to the story.”

Mister Smith Entertainment has pre-sold the film to Signature UK in UK /Ireland, Transmission Films in Australia/NZ, ACME in the Baltics, WW Entertainment in Benelux, Exponenta in CIS, Blitz in Ex-Yugoslavia, Metropolitan in France, Eagle Pictures in Italy, Monolith Films in Poland, NOS Lusomundo in Portugal, Mislabel in Scandinavia, Tripictures in Spain, and Ascot Elite in Switzerland. The company is currently in negotiation on additional territories.

4 Randy Pitchford: Games as a hobby trumps games a service

7 Killings of 2 Canadians in Mexico due to gang debt,...