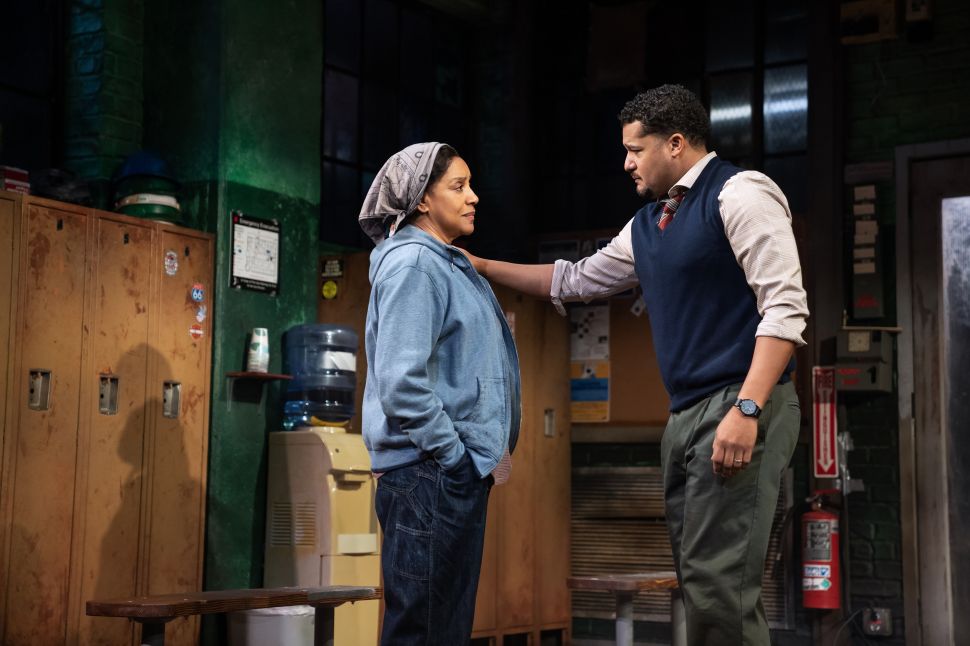 Say this for Skeleton Crew: it’s well-named. All the characters in Dominque Morisseau’s play at Manhattan Theatre Club’s Friedman Theater are dutifully walking the line to an imminent dead end. They’re production workers at a Detroit automobile stamping factory at the height of the Great Recession. It’s “the last small plant standing,” and it’s slowly tilting toward extinction.


The most stressed and depressed about this downward turn of events is the factory foreman who sees it coming, Reggie, the man in the middle between management and plant employees. The cross he bears is that he has too much heart and humanity to serve two gods simultaneously.

“It’s an impossible situation Reggie is in,” declares the man who’s playing him, Brandon J. Dirden. “What I love about great plays is the conundrum, the damned-if-you-do—damned-if you-don’t scenario. Reggie has a lot to manage. He’s trying to keep everything in the air at the same time—what we see with these workers and what we don’t see with his family. He’s not just married to his job. He also has kids and a wife that he loves. Dominique has provided a full picture of a man in crisis who meets this crisis with courage, grace and strength.


“Reggie has a speech where he talks about the invisible line he’s navigating that I really connect with. I think it’s true for all of us. We all walk lines where we’re trying to do what’s right and what’s best—and those two things don’t always agree. He talks about the invisible line that separates him and another worker. What it says to me is that Reggie doesn’t see himself above or below that guy. He doesn’t see a difference, regardless of his station in life or what he has or doesn’t have. He cannot separate himself from anyone else.”


The idea, says Dirden, is that we have responsibilities to each other: “We can’t be selfish in only thinking about ourselves.” It’s an attitude that the 44-year-old actor feels applies to his own profession: “I’m in a business where it can seem to be all about me. I walk out the stage door and people want autographs or pictures, and the moment becomes about me because of what they just witnessed. This play is such a refreshing reminder to take on these characters who give us a true sense of what this actually is, so I can never think this is just about me. It’s about us.”

Acting was an early calling for Dirden, who caught it from his dad, Willie Dirden, a mainstay of Houston community theater. “He had five kids. I was the next to the last, and my brother Jason was the last. I was probably the most outgoing of the five or the one that needed the most attention—you know, that middle-child syndrome. With all that energy, I think my parents realized I wanted to be seen. I thought about doing plays in elementary school at a young age.”


Since the Dirdens had a home when other cast members tended to have apartments, it became a popular site for cast parties, and that recurring procession of colorful showbiz types had a formative, life-altering effect on a young boy—two young boys, counting Jason. “The joy and fun and humanity spilled over from Saturday nights to Sunday mornings,” Dirden remembers. “I took all that in and told myself, ‘This is for me! How do I get to do this all of the time?’”


Both brothers figured it out when they took up acting in earnest. “We learned that it wasn’t a party, that it was hard work. Our dad demanded, if we were going to do this, we’d do it right. Jason and I liken him to Richard Williams, Venus and Serena’s father. He was never a tennis pro, but he instilled values in his two daughters, and they went on to flourish. Our dad had respect for the craft of acting and storytelling and literature. There were books of plays of all kinds on his bookshelves. He provided us with access to the written word and access to plays being produced and access to imagining what it might be like to pursue this thing professionally.”

For Dirden, that arrived at age 12 when he stage-debuted at Houston’s Alley Theater in the regional premiere of August Wilson’s Joe Turner’s Come and Gone. He attended a performing arts middle school that had a link with the Alley. When the Alley needed kids for A Christmas Carol to play Cratchits, Dirden was among those bussed over to audition. A bum singer, he displayed enough talent to be asked to stick around for the Joe Turner audition and got cast.


His big break in New York was also in an August Wilson play, The Piano Lesson, for which he won both an Obie and a Theater World Award in 2013. He admits it’s the Wilson play closest to his heart.


With that kind of luck, he logically stuck with Wilson and, to date, has either performed or directed nine of the ten plays in Wilson’s Century Cycle of the Black experience in Pittsburgh. He has even directed his wife (actress Crystal Dickinson) and his brother in August Wilson.

His untapped tenth play is Gem of the Ocean, which was brought to Broadway by Houston’s own Phylicia Rashad, who was Tony-nominated as the 285-year-old Aunt Ester. A considerably younger Rashad shares top billing with Dirden in Skeleton Crew, and he couldn’t be happier.


“I’ve been dreaming of this day for so long,” he says with a discernible sigh. “As far as I’m concerned, Phylica Rashad is a national treasure. I’ve seen her on stage many times and, of course, grew up with her as ‘America’s mom.’” It pains him to admit he’s not the first Dirden to co-star with Rashad—or even the second. Jason appeared with her in an Arena Stage play and was directed by her twice. And his dad co-starred with her many summers ago, in a Houston production of a Negro Ensemble Company play, directed by NEC co-founder Allie Woods.


From the get-go, Dirden and Rashad have been clicking away like hometown Houstonians. One choice memory is sitting across from her at the first table read when they suddenly locked eyes. “She saw me, and I saw her, and what was communicated in that look was ‘There’s a real possibility to go deep here.’ It was a knowing look between two artists who understood the potential of what great writing can afford us. We knew it was going to take some real work and some real trust. We knew what we had, and we didn’t want it to go by without giving it our all.”

Ruben Santiago-Hudson, who directed the original 2016 production of Skeleton Crew at the Atlantic Theater Company, helms its Broadway revival, too. “Ruben doesn’t tell his actors much about who these people are,” says Dirden, implying he doesn’t have to. “Ruben is impeccable at hiring actors he feels will make you understand who they are.” The cast he assembled for the play’s Off-Broadway bow included Lynda Gravatt and—oops, there he is again—Jason Dirden.


Reggie’s agility in walking the line was not Dirden’s first attempt at navigating between rival forces. His most remembered Broadway performance was that of Martin Luther King, Jr. in Robert Schenkkan’s 2014 Tony-winning play about LBJ, All the Way. “It was pretty daunting,” he readily allows. “My saving grace was that Schenkkan was revealing something that isn’t often revealed about Dr. King: his political side. With this play, you get to see him dealing with two different factions within his own party—the Roy Wilkins crowd versus the Stokely Carmichael crowd. That took real political awareness. Dr. King had to walk a razor’s edge—not just with Lyndon Johnson or JFK—but within his own movement between CORE and SNCC, plus the pressures of Islam that Malcolm X was putting on the movement. It’s a role I’ll relish forever.”


Next up is a Broadway revival of Richard Greenberg’s baseball comedy, Take Me Out (a Tony winner in 2003), which will begin previews March 10, two years from the day when the pandemic sent everybody to the showers. “We thought we’d have a couple of weeks’ hiatus,” he recalls. “Now, here we are.”

Dirden spent those two years productively as an associate arts professor in NYU’s Grad Acting program at Tisch School of the Arts. “It’s one of the most rewarding things I’ve ever done,” he insists. “I feel excited to be partnering with these young people who will shape whatever is to become of the American theater. They’re deeply committed to making sure that our stage is populated with stories that really reflect the forces of humanity that we’re living through, however you categorize it—the racial divide, sex parity, gender parity, ageism. I think these young artists really have the heart to make certain we tell these stories and tell them right.”

Why Does Cardi B Want To ‘Chat With Meghan...