British Prime Minister Liz Truss says the death of Queen Elizabeth II has caused a "heartfelt outpouring of grief" in the U.K. and around the world.

Truss spoke Friday at the start of a special session of Parliament paying tribute to the Queen. Truss called the monarch "the nation's greatest diplomat" and said her devotion to duty was an example to everyone.

The prime minister was officially appointed by the Queen on Tuesday, just two days before her death. Truss said at the meeting, "she generously shared with me her deep experience of government, even in those last days."

Normal business in Parliament has been suspended and lawmakers will spend two days offering their memories and reflections on the Queen, who died Thursday at her Balmoral residence in Scotland after seven decades on the throne.

Queen Elizabeth, the longest-reigning monarch in British history, has died. The CBC's Margaret Evans has a look at her life and legacy.

"The British people, the Commonwealth, and all of us in this House will support him as he takes our country forward to a new era of hope and progress," said Truss.

"The Crown endures, our nation endures and in that spirit, I say, 'God Save the King.'"

Charles and his wife, Camilla, the Queen Consort, arrived in London on Friday after leaving Balmoral. He was expected to meet with the prime minister for the first time in his official role Friday afternoon as the country began its official mourning period.

Charles, 73, is expected to address the nation in a speech later in the day, as well.

Bells tolled around Britain and a 96-gun salute was planned early Friday afternoon in London — one for each year of the Queen's long life.

On Friday, Truss and other senior ministers are expected to attend a remembrance service at St. Paul's Cathedral in London. Charles, who became the monarch immediately upon his mother's death, will then be formally proclaimed king at a special ceremony Saturday.

Death of Queen Elizabeth prompts outpouring of grief in Britain

Thousands of people rushed to Buckingham Palace as news broke of Queen Elizabeth’s death. How Britons are absorbing the momentous news.

Elizabeth was Britain's longest-reigning monarch and a symbol of constancy in a turbulent era that saw the decline of the British empire and disarray in her own family.

"It feels like, we are once again in a moment in our history where, as Larkin put it, things are 'growing strange,' where everything is spinning and the nation requires a still point," said Starmer.

But, Starmer added, "the late Queen would want us to redouble our efforts, to turn our collar up and face the storm, to carry on."

'The foundation of my life'

Hundreds of people arrived through the night to leave flowers outside the gates of Buckingham Palace, the monarch's London home, or simply to pause and reflect.

Finance worker Giles Cudmore said the Queen had "just been a constant through everything, everything good and bad."

"She's just been the foundation of my life, the country," he said.

WATCH l Britons mourn the death of only monarch they've known: Front Burner25:13Queen Elizabeth at the end of an empire
Queen Elizabeth took the throne at the age 25, and stayed there through seven decades, 15 British prime ministers and the longest reign in U.K. history. From the earliest days as Queen, Elizabeth grappled with the British Empire transforming into a Commonwealth with more self-determined nations. But in more recent years, the Queen also ruled through the death of Princess Diana, numerous royal family scandals, and political upheaval like Brexit. Today, royal historian Carolyn Harris gives us a look back at how the Queen dealt with a colonial legacy, and a look forward at how the monarchy could change without her.

Everyday politics was put on hold, with lawmakers set to pay tribute to the monarch in Parliament over two days, starting at noon. Many sporting and cultural events were cancelled as a mark of respect, and some businesses — including Selfridges department store and the Legoland amusement park — shut their doors.

Archbishop of Canterbury Justin Welby said the Queen's death marked an "enormous shift" for Britain and the world.

"A part of our lives we've taken for granted as being permanent is no longer there," he said.

After a vigil in Edinburgh, the Queen's coffin will be brought to London, and she will lie in state for several days before her funeral in Westminster Abbey.

As the second Elizabethan Age came to a close Thursday, the BBC played the national anthem, God Save the Queen, over a portrait of the monarch in full regalia as her death was announced. The flag over Buckingham Palace was lowered to half-staff. And in one of the first of many shifts to come, the anthem played Friday was God Save the King. 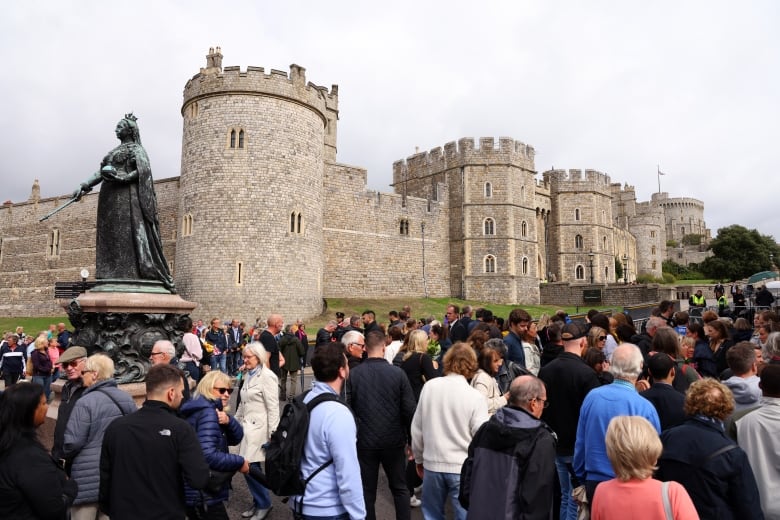 People gather outside of Windsor Castle in Berkshire, England, on Friday, one of several gathering points as Britons mourned the death of Queen Elizabeth II. (Richard Heathcote/Getty Images)

On Tuesday, Elizabeth presided at a ceremony at Balmoral Castle to accept the resignation of Boris Johnson as prime minister and appoint Truss as his successor.

In a statement on Thursday, Johnson mourned Elizabeth as "in many ways, the finest monarch in our history," but said that in Charles she "produced an heir to her throne who will amply do justice to her legacy, and whose own sense of duty is in the best traditions of his mother and his country." Kanye West ‘leaning into the light’ after Queen... How to break data silos for customer success