Two explosions at bus stops on Jerusalem's outskirts killed one person and wounded at least 14 others on Wednesday, health officials said, in what Israeli police said appeared to be an attack by Palestinian militants.

"Heartbroken to confirm that a young Canadian lost his life in this morning's reprehensible terror attack in Jerusalem," said Stadelbauer on Twitter. "Our sincere condolences to his family and friends, and to others wounded in this attack. Canada continues to condemn all forms of terror."

Heartbroken to confirm that a young Canadian lost his life in this morning's reprehensible terror attack in Jerusalem. Our sincere condolences to his family and friends, and to others wounded in this attack. Canada continues to condemn all forms of terror.

Benjamin Netanyahu of the Likud Party identified the victim in a tweet as Aryeh Shechoupek, although some outlets spelled the surname differently.

He has been described in the media as being 15 or 16 years old.

He was heading to a Jewish seminary when the blast went off, according to a police notice announcing his death.

Israel's ambulance service said 12 people had been taken to hospital from the first blast and three people were wounded in the second explosion. The Shaare Zedek Medical Center said the person who died at their facility was a teenager.

The initial blast occurred from an explosive device planted at a bus station near a city exit. The second — about 30 minutes later — hit a bus stop in the vicinity of an urban settlement in the east of the city.

"There has not been such a co-ordinated attack in Jerusalem for many years," Levi said. 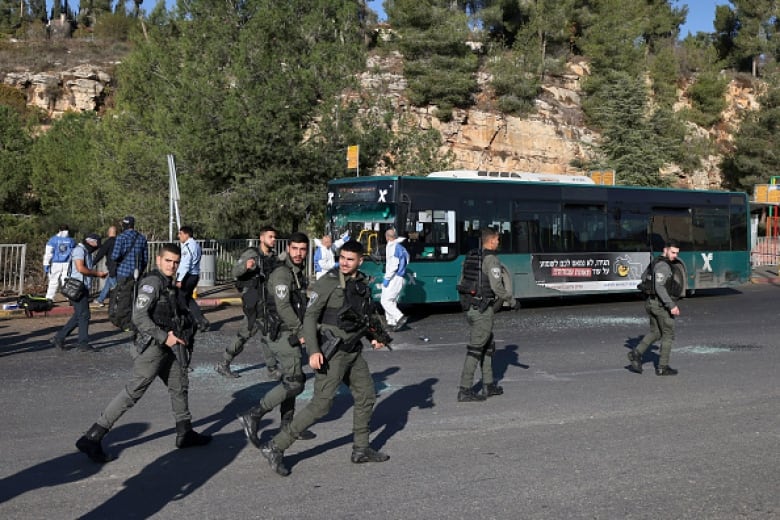 Israeli security at the scene of an explosion at a bus stop in Jerusalem. At least 14 people were wounded in the explosions that targeted bus stations. (Ahmad Gharabli/AFP/Getty Images)

The same outlet reported that the explosive devices were hidden in bags and at least one of them contained nails to maximize the impact.

"It was a crazy explosion. There is damage everywhere here," Yosef Haim Gabay, a medic who was at the scene when the first blast occurred, said. "I saw people with wounds bleeding all over the place."

While Palestinians have carried out stabbings, car rammings and shootings in recent years, bombing attacks have become rarer since the end of a Palestinian uprising nearly two decades ago.

Security camera footage aired by N12 news showed the moment of the first explosion with a sudden cloud of smoke billowing from the bus stop. Television showed debris strewn around the site, which was cordoned off by emergency services.

The United Nations, the European Union and the United States condemned the attacks.

"Terrorism is a dead-end that accomplishes absolutely nothing," the U.S. Embassy said on Twitter. 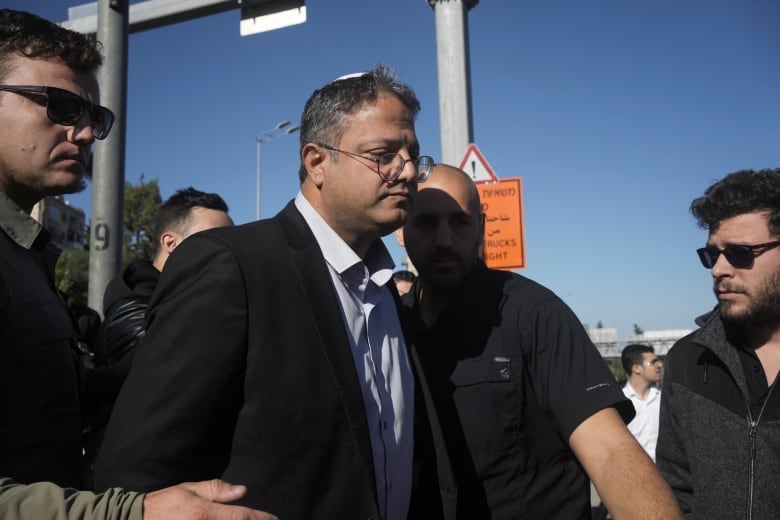 Israeli far-right lawmaker Itamar Ben-Gvir arrives at the scene of an explosion at a bus stop in Jerusalem. (Maya Alleruzzo/The Associated Press)

The explosions, which carry echoes of the bus bombings that were a hallmark of the Palestinian revolt of 2000-2005, follow months of tension in the occupied West Bank after the Israeli military launched a crackdown in the wake of a series of deadly attacks in Israel.

In Gaza, a spokesperson for the Palestinian militant group Hamas praised the Jerusalem explosions but stopped short of claiming responsibility.

Hamas spokesperson Abdel-Latif Al-Qanoua linked the blasts to "the crimes conducted by the [Israeli] occupation and the settlers."

The explosions came as former prime minister Netanyahu negotiates with allies to form a new right-wing government including members of religious and far-right parties.

One of his allies, ultra-nationalist lawmaker Itamar Ben-Gvir who heads the Jewish Power party, visited the scene of the first bombing and demanded tough action against militants.

"Even if it's in the West Bank, lay siege to them and go from house to house in search of guns and restore our deterrence power," said Ben-Gvir, who hopes to be appointed police minister in the new government.

In a separate incident, Palestinian militants late on Tuesday abducted the body of an Israeli high-school student who had died in a Palestinian hospital in the West Bank city of Jenin after being injured in a car crash nearby, the teenager's uncle told Kan Radio.

The Israeli military said it expected the body would be returned soon. It was unclear why the militants had taken the body and there was no immediate indication of any connection between this incident and the bombings.

More than 130 Palestinians have been killed in Israeli-Palestinian fighting in the West Bank and east Jerusalem this year, making 2022 the deadliest year since 2006. The Israeli army says most of the Palestinians killed have been militants, but Palestinians say the dead have included stone-throwing youths.

At least seven more Israelis have been killed in Palestinian attacks in recent weeks. Where CISOs are getting quick zero-trust wins...