Catalan separatist leader Carles Puigdemont left a jail in Sardinia on Friday after a judge ruled that he could go free pending an Oct. 4 hearing on his extradition to Spain, where the political firebrand is wanted for sedition.

Puigdemont, the former president of Spain's Catalonia region and a member of the European Union parliament, left the jail in Sassari a day after he had been detained by police. He had been invited to attend a Catalan cultural event and a meeting of Sardinian independence sympathizers on the Mediterranean island.

"Spain never misses the opportunity to be ridiculous. #NoSurrender," Puigdemont tweeted after he left the jail. Mobbed by reporters outside the gates, he said of his less than 24 hours behind bars: "Very good, no problem. The police and prison guards were very professional, very serious people."

The judge who authorized his release ruled hours earlier that Puigdemont was free to travel without restrictions.

Judge Plinia Clara Azzena told The Associated Press by phone from the courthouse in Sassari that while she found his arrest to be valid, based on the documentation she examined, "we didn't restrict him in any way. He can travel" if he wants.

Azzena and two other judges will hold an Oct. 4 hearing to rule on extradition.

Earlier, Puigdemont's Italian lawyer, Agostinangelo Marras, told reporters that when the judge during the brief hearing asked his client whether he wanted to go to Spain, Puigdemont replied "no."

Puigdemont and a number of his separatist colleagues fled to Belgium in October 2017, fearing arrest after holding an independence referendum for Catalonia that the Spanish courts and government said was illegal.

He was taken into custody Thursday night when he arrived at the airport in Alghero, Sardinia. Sardinia has strong Catalan cultural roots and its own independence movement. Alghero, a city on the island's northwest coast, is hosting the traditional Catalan folklore festival that Puigdemont planned to attend.

"Freedom, freedom," shouted demonstrators outside the courthouse in Sassari. They held signs in a Sardinian dialect proclaiming, "Democracy, the Sardinian nation supports the Catalan nation," and held the flags of Sardinia and Catalonia.

'Dialogue is the only way,' says Spain PM

Although Puigdemont currently holds a seat in the European Parliament, that legislature stripped him of parliamentary immunity.

Puigdemont's detention caused political commotion in Spain, where the topic of Catalan independence has for decades been a deeply divisive issue. Separatists demanded his release and scheduled street protests, while right-of-center parties said he should face justice.

Spanish Prime Minister Pedro Sanchez said during an official visit to the Canary Islands on Friday that he has "respect for all legal procedures opened in Spain, in Europe and, in this case, in Italy." 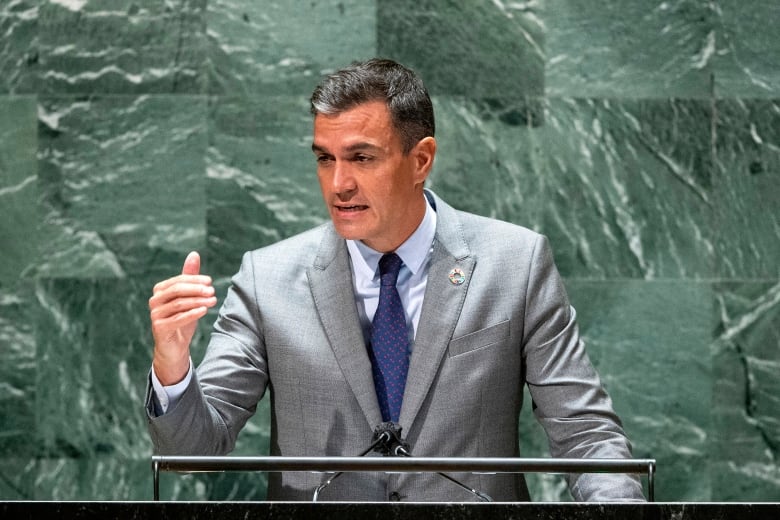 Just under half of Catalans want to break away from Spain, opinion polls indicate. Most Spaniards don't want Catalonia to be granted independence.

At the heart of the immediate legal matter was whether the warrant issued by Spain seeking Puigdemont's arrest is valid. Gonzalo Boye, his lawyer, has insisted the warrant issued in 2019 that provided the basis for Italian authorities to detain him has been suspended. 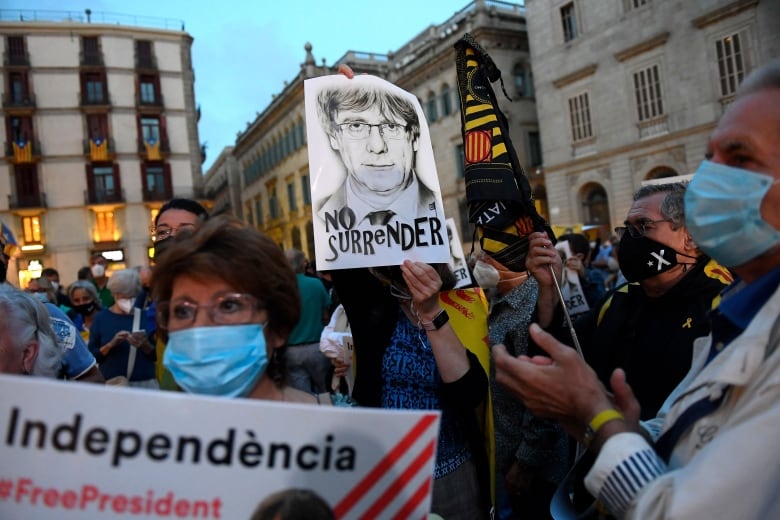 Puigdemont supporters gather in Barcelona on Friday. Most Spaniards don't want Catalonia, wherein Barcelona is located, to be granted independence, and just under half of Catalans want to break away from Spain, opinion polls indicate. (Josep Lago/AFP via Getty Images)

Boye told Spanish radio station SER: "We have to see whether the arrest warrant is enforceable. That'll be up to the legal authorities" in Italy.

The Spanish Supreme Court judge handling the case, Pablo Llarena, sent a letter to the European Union's Agency for Criminal Justice Cooperation stating that the arrest warrant is "in force and pending the capture of those accused of rebellion."

Ultimately, it would be up to the Italian Justice Ministry to approve or deny extradition. Spain's Supreme Court, which issued the European arrest warrant, made no official comment.

It's not the first time Spanish courts have tried to detain Puigdemont abroad. After a Belgian court declined to send him back in 2017, the following year he was arrested in Germany but a court there also refused to extradite him.

Nine Catalan separatists later received prison sentences for their role in the 2017 referendum ranging from nine to 13 years. They were pardoned in July, but Puigdemont, who fled, was not.

Puigdemont's being taken into custody in Italy at Spain's request triggered anger by some Italian politicians, including Democratic Party lawmaker Romina Mura, who is Sardinian.

"To arrest a representative of the Catalan people who sits in the European Parliament, who is traveling to carry out his functions and on top of that arrest him in Sardinia in a city of Catalan tradition and culture like Alghero, is a relevant political deed, even if carried out as a judicial act," Mura said.

Alghero's historic and cultural ties date with Catalonia date back to the 14th century, when a Catalan-Aragonese force won a naval battle off the Sardinian coast and the force's commander triumphantly entered the city on Sardinia's northwest coast.

Some 20 per cent of Alghero's residents speak a Sardinian dialect derived from the Catalan language and recognized by both the national government of Italy and the island's regional government.

25% of patients prefer communicating with their...