Days after devastating earthquake, many Afghans still waiting for aid When the ground heaved from an earthquake in Afghanistan earlier this week, Nahim Gul's stone-and-mud house collapsed on top of him.

He clawed through the rubble in the pre-dawn darkness, choking on dust as he searched for his father and two sisters. He doesn't know how many hours of digging passed before he caught a glimpse of their bodies under the ruins. They were dead.

Now, days after a 6.0-magnitude quake that devastated a remote southeast region of Afghanistan on Wednesday and killed at least 1,150 people by authorities' estimates, Gul sees destruction everywhere and help in short supply. His niece and nephew were also killed in the quake, crushed by the walls of their house.

The United Nations has put the death toll at 770 people but warned it could rise further. Either toll would make the quake Afghanistan's deadliest in two decades.

"I don't know what will happen to us or how we should restart our lives," Gul told The Associated Press on Sunday, his hands bruised and his shoulder injured. "We don't have any money to rebuild."

It's a fear shared among thousands in the impoverished villages where the fury of the quake has fallen most heavily — in Paktika and Khost provinces, along the jagged mountains that straddle the country's border with Pakistan.

Those who were barely scraping by have lost everything. Many have yet to be visited by aid groups and authorities, which are struggling to reach the afflicted area on rutted roads — some made impassable by landslides and damage.

Aware of its constraints, the cash-strapped Taliban have called for foreign assistance and on Saturday appealed to Washington to unfreeze billions of dollars in Afghanistan's currency reserves. The United Nations and an array of international aid groups and countries have mobilized to send help. 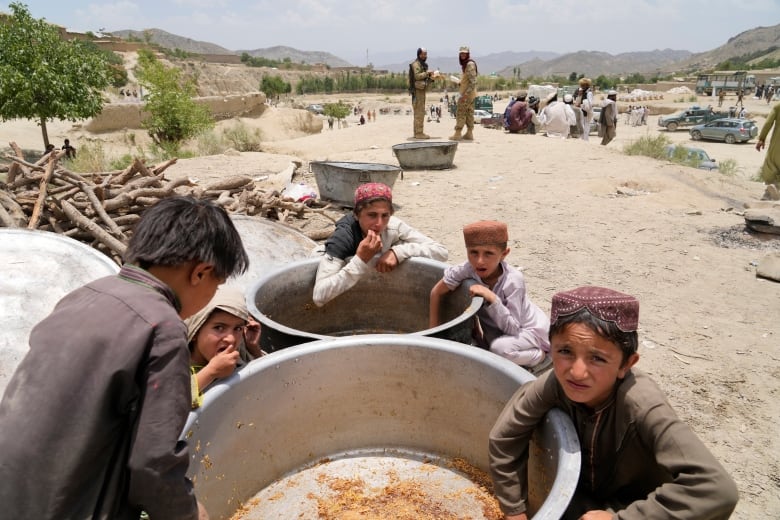 Afghan children scrape rice from pots at a camp in Gayan district on Sunday following the quake, the country's deadliest in two decades. Even before the earthquake, about half of the country's 39 million people were facing life-threatening levels of food insecurity because of poverty. (Ebrahim Nooroozi/The Associated Press)

China pledged nearly $7.5 million US in emergency humanitarian aid on Saturday, joining nations including Iran, Pakistan, South Korea, the United Arab Emirates and Qatar in dispatching a planeload of tents, towels, beds and other badly needed supplies to the quake-hit area.

UN Deputy Special Representative Ramiz Alakbarov toured the hard-hit Paktika province on Saturday to assess the damage and distribute food, medicine and tents. UN helicopters and trucks laden with bread, flour, rice and blankets have trickled into the stricken areas.

"Yesterday's visit reaffirmed to me both the extreme suffering of people in Afghanistan and their tremendous resolve in the face of great adversity," Alakbarov said, appealing for the repair of damaged water pipes, roads and communication lines in the area.

Without support, he added, Afghans "will continue to endure unnecessary and unimaginable hardship."

Rescuers in Afghanistan search for survivors of deadly quake

3 days ago
Duration 4:05
People dug by hand through villages in eastern Afghanistan that were reduced to rubble by a powerful earthquake that killed at least 1,000 people. An estimated 1,500 others were reported injured, the state-run news agency said.

Hundreds of families living out in the open

But the relief effort remains patchy and limited due to funding and access constraints. The Taliban, which seized power last August from a government sustained for 20 years by a U.S.-led military coalition, appears overwhelmed by the logistical complexities of issues such as debris removal in what is shaping up to be a major test of its capacity to govern.

Villagers have dug out their dead loved ones with their bare hands, buried them in mass graves and slept in the woods despite the rain. Nearly 800 families are living out in the open, according to the UN's humanitarian co-ordination organization, OCHA.

Gul received a tent and blankets from a local charity in the Gayan district, but he and his surviving relatives have had to fend for themselves. Terrified as the earth still rumbles from aftershocks like one on Friday that claimed five more lives, he said his children in Gayan refuse to go indoors. 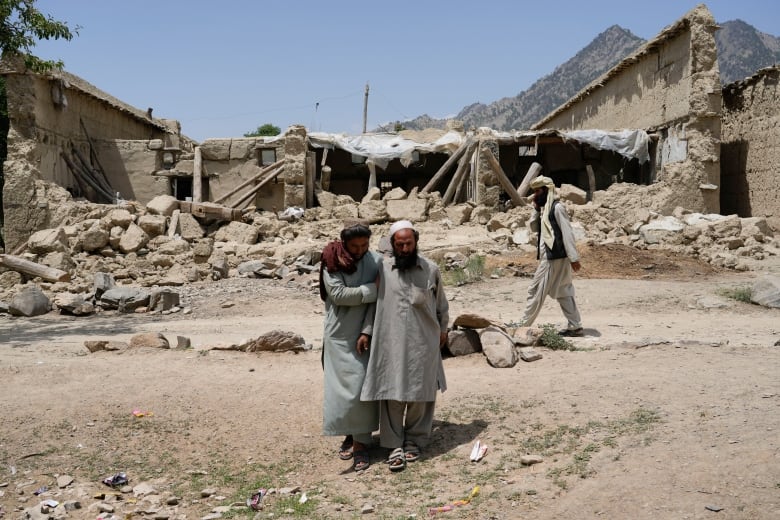 Afghans walk in front of destroyed homes in Gayan district on Sunday. Relief efforts have been patchy and limited due to funding and access constraints. (Ebrahim Nooroozi/The Associated Press)

The earthquake was the latest calamity to convulse Afghanistan, which has been reeling from a dire economic crisis since the Taliban took control of the country as the United States and its NATO allies were withdrawing their forces. Foreign aid — a mainstay of Afghanistan's economy for decades — stopped practically overnight.

World governments piled on sanctions, halted bank transfers and paralyzed trade, refusing to recognize the Taliban government. The Biden administration cut off the Taliban's access to $7 billion US in foreign currency reserves held in the U.S.

As he toured the disaster site, acting Afghan Foreign Minister Amir Khan Muttaqi urged the White House to release the funds "at a time when Afghanistan is in the grips of earthquakes and floods" and to lift banking restrictions so charities can more easily provide aid.

'We have nothing left'

Western donors have withheld longer-term assistance as they demand the Taliban allow a more inclusive rule and respect human rights. The former insurgents have resisted the pressure, imposing restrictions on the freedoms of women and girls that recall their first time in power in the late 1990s.

Now, about half of the country's 39 million people are facing life-threatening levels of food insecurity because of poverty. Most civil servants, including doctors, nurses and teachers, have not been paid for months. 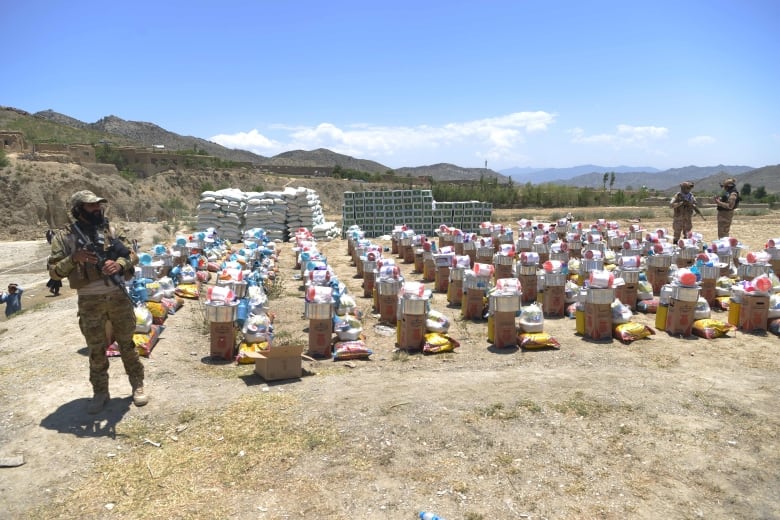 UN agencies and other remaining organizations have scrambled to keep Afghanistan from the brink of starvation with a humanitarian program that has fed millions and kept the medical system afloat. But with international donors lagging, UN agencies face a $3-billion US funding shortfall this year.

On Sunday, the World Health Organization said it was stepping up surveillance of infectious diseases in Afghanistan's earthquake-hit areas. Afghanistan is one of the two remaining polio-endemic countries in the world.

Reeling from war and impoverished long before the Taliban takeover, the far-flung areas hit by last Wednesday's earthquake are particularly ill-equipped to cope.

Some local businessmen have swung into action. The Afghanistan Chamber of Commerce and Investment said on Sunday it had raised more than $1.5 million US for Pakitka and Khost provinces.

Still, for those whose homes have been obliterated, the help may not be enough.

"We have nothing left," Gul said. Cybersecurity and the metaverse: Identifying...