UPDATE, with cause of death Andy “Fletch” Fletcher, keyboard player and founding member of the British band Depeche Mode, died after suffering an aortic dissection while at home on May 26, the band said in a statement on Instagram today.

The cause of death was disclosed by the band at the request of Fletcher’s family, according to the post.

“So, even though it was far, far too soon, he passed naturally and without prolonged suffering,” the band said.

Here is the full statement from band members Dave Gahan and Martin Gore:

We wanted to take a moment and acknowledge the outpouring of love for Andy that we’ve seen from all of you over the last few weeks. It’s incredible to see all of your photos, to read your words, and to see how much Andy meant to all of you. As you can imagine, it’s been a strange, sad, disorienting few weeks for us here, to say the least. But we’ve seen and felt all of your love and support, and we know that Andy’s family has too.

A couple weeks ago we received the result from the medical examiners, which Andy’s family asked us to share with you now. Andy suffered an aortic dissection while at home on May 26. So, even though it was far, far too soon, he passed naturally and without prolonged suffering.

We had a celebration of Andy’s life in London last week, which was a beautiful ceremony and gathering with a few tears, but filled with the great memories of who Andy was, stories of all of our times together, and some good laughs. Andy was celebrated in a room full of many of his friends and family, our immediate DM family, and so many people who have touched Andy’s and our lives throughout the years. All being together was a very special way to remember Andy and see him off.

So thank you for all of the love you’ve shown Andy and his family and friends over the last few weeks. It honestly means the world to all of us. Andy, you’ll be missed, but certainly not forgotten.

PREVIOUS, May 26: Andy “Fletch” Fletcher, keyboard player and founding member of the British new wave electronic band Depeche Mode, has died, the band said in a statement. He was 60.

“We are shocked and filled with overwhelming sadness with the untimely passing of our dear friend, family member and bandmate Andy ‘Fletch’ Fletcher,” the band tweeted. “Fletch had a true heart of gold and was always there when you needed support, a lively conversation, a good laugh, or a cold pint. Our hearts are with his family, and we ask that you keep them in your thoughts and respect their privacy in this difficult time.”

Details including cause of death and survivors were not immediately available. 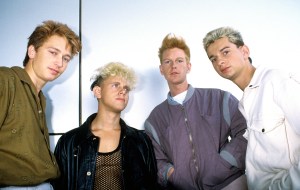 Depeche Mode, inducted into the Rock and Roll Hall of Fame in 2020, was founded in 1980 in Basildon, England, by Fletcher, keyboardist and singer Vince Clarke, singer Dave Gahan and guitarist-keyboardist Martin Gore. Clarke left the band shortly after the release of its first album Speak & Spell in 1981.

Fletcher’s role in the band also included bass guitar. He once told an interviewer, “Martin’s the songwriter, Alan’s the good musician, Dave’s the vocalist, and I bum around.”

With 14 studio albums and 55 singles, Depeche Mode has been a staple on the UK charts since the 1980s and breaking through in the U.S. by 1985. The synth group scored radio hits with such songs as “People Are People,” “Personal Jesus” and “Master and Servant,” and “Walking in My Shoes,” “I Feel You,” “Policy of Truth” and its lone U.S. top 10 “Enjoy the Silence” all hit No. 1 on Billboard’s Modern Rock chart. Though not a hit single in the U.S., its 1981 song “Just Can’t Get Enough” became a breakthrough video during the early days of MTV. (Watch it below.)

Erik Pedersen contributed to this report. ‘The Old Man’ Renewed For Season 2 At FX