The Netherlands confirmed 13 cases of the new omicron variant of the coronavirus on Sunday while Australia found two, as the countries half a world apart became the latest to detect it in travellers arriving from southern Africa.

First discovered in South Africa, the variant has now been detected in European Union countries Belgium, Denmark, Germany, Italy and the Netherlands, along with Australia, Botswana, Britain, Hong Kong and Israel.

Israel decided to bar entry to foreigners, and Morocco said it would suspend all incoming flights for two weeks starting Monday — the most drastic of a growing raft of travel curbs being imposed by nations around the world as they scramble to slow the variant's spread, just days after it was identified by researchers in South Africa.

The "act first, ask questions later" approach reflected growing alarm about the emergence of a potentially more contagious variant that some feared could prolong a pandemic that has killed more than five million people worldwide. 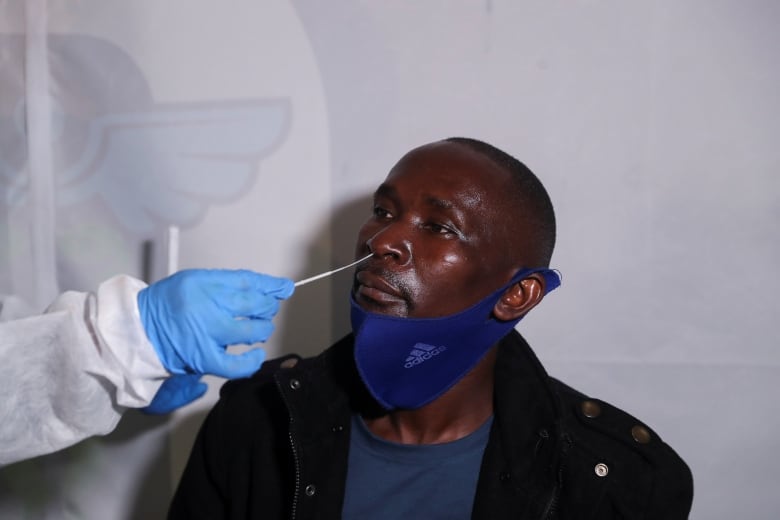 A passenger is tested for COVID-19 at O.R. Tambo International Airport on Sunday. (Sumaya Hisham/Reuters)

The World Health Organization (WHO) said on Sunday that it is not yet clear if the new variant is more transmissible compared with others or if it causes more severe disease.

"Preliminary data suggests that there are increasing rates of hospitalization in South Africa, but this may be due to increasing overall numbers of people becoming infected, rather than a result of specific infection with omicron," it said.

However, in a statement, the United Nations agency reiterated that preliminary evidence suggests there may be a higher risk of reinfection from the variant.

The WHO said it is working with technical experts to understand the potential impact of the variant on existing countermeasures against COVID-19 disease, including vaccines.

"There is currently no information to suggest that symptoms associated with omicron are different from those from other variants," the WHO said.

What’s known about the omicron variant

2 days ago
The World Health Organization has declared a new variant of concern called omicron, first identified in South Africa. Scientists say there are a large number of mutations in the omicron variant, which means it could be more infectious and cause more severe illness. 3:00

"Initial reported infections were among university studies of 'younger individuals who tend to have more mild disease,' but understanding the level of severity of the omicron variant will take days to several weeks," it said.

Many countries have already restricted or banned travel from various southern African countries — among the latest to do so are New Zealand, Thailand, Indonesia, Singapore, Saudi Arabia and the United Arab Emirates. This goes against the advice of the WHO, which has warned against any overreaction before the variant is thoroughly studied.

South Africa's government responded angrily to the travel bans, which it said are "akin to punishing South Africa for its advanced genomic sequencing and the ability to detect new variants quicker." It said it will try to persuade countries that imposed them to reconsider.

The WHO sent out a statement saying that it "stands with African nations" and called for borders to stay open. "Travel restrictions may play a role in slightly reducing the spread of COVID-19 but place a heavy burden on lives and livelihoods. If restrictions are implemented, they should not be unnecessarily invasive or intrusive, and should be scientifically based," it said.

So far, no omicron cases have been confirmed in Canada, although a special adviser to the WHO's director general says it "wouldn't be a surprise" if there were cases of the variant  already in the country.

"It's very possible that it's in any country, and the harder one looks, the more likely one is to find [it], so it wouldn't be a surprise," Dr. Peter Singer of Canada said in an interview on Rosemary Barton Live that aired Sunday.

Singer noted that the foremost things Canadians can do to protect themselves are the same as they have been throughout the COVID-19 pandemic: get vaccinated and follow public health measures.

'Wouldn't be a surprise' if omicron variant already in Canada, says WHO official

3 hours ago
Dr. Peter Singer, special adviser to the director general of the World Health Organization, joins Rosemary Barton Live to discuss how concerned countries around the world, including Canada, should be about the new omicron variant. 8:07

What's happening around the world

As of Sunday, more than 261.2 million cases of COVID-19 had been reported worldwide, according to Johns Hopkins University's coronavirus database. The reported global death toll stood at more than 5.1 million.

In Europe, thousands rallied in the Czech capital of Prague on Sunday to protest the government's restrictive measures to tackle a record surge of coronavirus infections. 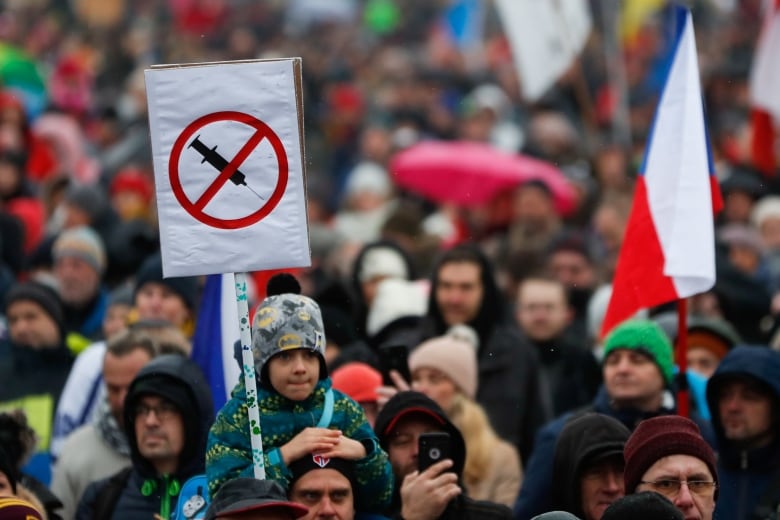 A demonstrator holds a sign during a protest against COVID-19 measures in Prague on Sunday. (David W Cerny/Reuters)

In Africa, Ghana will ramp up its inoculation campaign next month and make the vaccine mandatory for targeted groups, including all public-sector and health workers, beginning Jan. 22.

In the Americas, Colombia will extend its health state of emergency until Feb. 28 due to the emergence of omicron, it's president said.

In the Asia-Pacific region, Australian police said they expect to charge a 31-year-old woman with arson after she allegedly set fire to the COVID-19 quarantine hotel where she and her two children were staying.

Tesla Model Y gets an AMD Ryzen chip upgrade in...

AMC and Sony will hand out NFTs to 'Spider-Man'...