‘Emancipation’ Review: The Historical Drama As Will Smith Star Vehicle 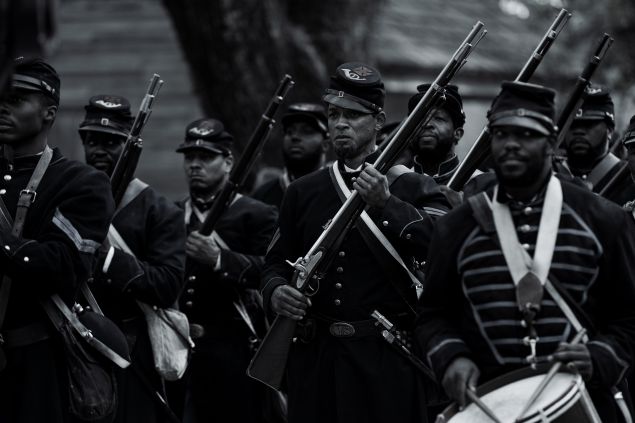 Will Smith in “Emancipation.” Apple TV+

An attempt to reframe the runaway enslaved person narrative into a modern action-thriller, Emancipation is a film that exists in the same liminal, neither-here-nor-there state of its visuals, which are presented in an ultra-desaturated palette that doesn’t quite capture the poetic starkness of black-and-white nor the harsh reality of vivid color.

Similarly, the movie exists between prestige and genre (or two genres, really, as it morphs in its final third from an escaped fugitive picture to a war movie), yet it can’t quite grasp either the elevated emotion of prestige or the snap of the genre.


It’s also a pinch of character study, in its highly fictionalized account of a man whose back—horrifically scarred from years of being whipped by a plantation overseer—was photographed in a Union camp in Baton Rouge in the spring of 1863. That image became the one of the first examples of a painfully common modern phenom: images of destroyed and desecrated Black bodies going viral to alert the world to the scourge of racism, and in the process re-traumatizing those who continue to experience that scourge.

But mainly Emancipation is just a standard vehicle for its star, the embattled Oscar-winner Will Smith, who commits superhuman acts of derring-do—wrestling alligators, tending his own wounds with a cauterized knife, etc.—in the manner of countless other cinema heroes. All the while, the erstwhile Fresh Prince, who also serves as producer, uses the weighty subject matter and the physical duress of his swamp-set portrayal to once again bolster his career-long obsession with cementing a permanent place in the Hollywood “Serious Actor” firmament.


Director Antoine Fuqua favors stylized gore and swooping camerawork, and so does Emancipation, his first teaming with Smith. But if, say, his The Equalizer films, show off Denzel Washington’s ex-operative as a justice-seeking killing machine (Fuqua is currently in Italy filming the third in the franchise), here he uses his skills to contextualize the horrors of slavery and life in wartime South, which is made to appear as a Hieronymus Bosch-esque hellscape.


When the Rebel army purchases Smith’s Peter (according to historians, the man in the picture’s real name was Gordon, which is the name of another escapee in the film) to work on the construction of a secret railroad to transport a deadly cannon, his new camp is surrounded by the heads of deserters and escaped slaves on pikes. As his fellow workers die off around him, they are tossed in a shallow ditch and doused with lye.

At the apex of this evil stands Jim Fassell and his fang-baring hunting dogs. This ruthless hunter of runaways, portrayed by Ben Foster with convincing dead-eyed menace, seems so directly inspired by Schindler’s List’s Amon Göth, that screenwriter William Collage even borrows the historical Göth’s famous taunt—“I am your God”—to serve as Fassell’s catchphrase.


The central character’s famous scars are not revealed until after he enlists in the Union army; it is meant to be a moment of great catharsis, but like much of the film, lands emotionally flat.


Peter’s past life and the personal horrors he endured are never mentioned or even alluded to. Beyond his escape through the swamp and use of onions to throw the dogs off his scent, few aspects of what little historians know about this significant figure were used to tell the story. As a result, the use of the man from the famous picture as the film’s central figure feels less like a way to honor and respect his memory and more like a hook to help sell the screenplay to producers.

Between Emancipation’s competing missions of esteeming the humanity of a lost historical figure and placating the ego of its star, the second option inevitably wins the day. When the hero clanks a menacing guard over the head with a shovel and lets out a furious roar, it’s not that the almost supernatural rage that lies behind it isn’t real; it’s that it belongs to the actor that plays him and not the character himself.