Thanksgiving AM Update: Refresh for chart and more analysis Disney’s Encanto opened to $7.5M on Wednesday, which isn’t the best of starts from one of the studio’s animated movies over Thanksgiving, it’s even under its low-grossing titles Pixar’s The Good Dinosaur which saw a $9.76M Wednesday for a $39.1M opening weekend, $55.4M 5-day. The industry outlook here for Encanto is $26.1M over 3-days, and $38.6M over 5 days. Pic’s opening day includes yesterday’s previews.

What will change these estimates? Or that matter any of this weekend’s estimates during the pandemic?  If Thanksgiving, which is typically a down-day at the box office, performs better than expected, and if Black Friday, a vibrant day for moviegoing, soars. Industry estimates figure that the 5-day holiday will ring up $140.1M, -46% from 2019’s 5-day Thanksgiving of $258.5M, when Disney’s Frozen 2 ruled the Earth.

Here’s what I will say: Encanto is a film to be discovered, evident in its A CinemaScore. Once inside, audiences will realize it’s up there in the Moana and Frozen pantheon, boosted by a rousing soundtrack from Lin-Manuel Miranda. Some average joe moviegoers may think in the marketing of Disney’s Encanto that it’s Coco all over again, and it definitely is not. Encanto is a female driven story about a girl who is trying to ward bad luck off from her gifted family in Colombia, while Coco is Mexico-set, about a boy’s connections with his family’s souls in the Land of the Dead, as he confronts their ban of music in his quest to find his great-great-grandfather, a legendary singer. Expect Encanto to be a sleeper over the holidays that families gradually go to; the pic having better optics than Good Dinosaur with 92% Certified Fresh on Rotten Tomatoes vs. Good Dinosaur‘s 76% certified fresh.

You can’t say that families aren’t going to the box office this Thanksgiving: Sony’s Ghostbusters: Afterlife looks to rank second for the Thanksgiving stretch, having made an estimated $5.4M on Wednesday, +18% from Tuesday on its way to a $23.6M second weekend, -46%, $34.2M 5-day and $86.7M running total by Sunday, which is about 1% ahead of Paul Feig’s 2016 Ghostbusters through ten days. True, it’s older skewing next to Encanto and more guys, but if you’re a family of 5 deciding where to spend your money in inflated economic times, it’s Ghostbusters: Afterlife or Encanto. 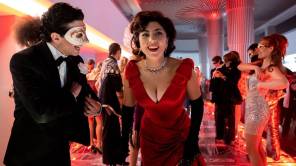 In third, UAR and MGM’s House of Gucci is posting a solid result for an adult-driven movie with a long running time during the pandemic with a $4.2M opening day. Note that Ridley Scott’s previous movie, The Last Duel, which ran 2 hours and 32 minutes (to Gucci’s 2 hours and 37 minutes) posted an opening weekend of $4.75M and stopped making money at $10.8M. House of Gucci‘s opening frame will beat the entire gross of the filmmaker’s previous title with a projected $14.3M 3-day, $21.7M 5-day. All of this is great news as the movie begins its ascent during awards season. Moviegoers seem to enjoy the Lady Gaga, Al Pacino, Jared Leto and Adam Driver drama thriller better than the critics with a B+ CinemaScore and 88% Rotten Tomatoes audience score. The brow wrinkles as to why the critics embraced Last Duel more over House of Gucci: The former was the portrayal of a rape from three different standpoints, two of them being men and it really put off awards season voters. Critics gave Last Duel 85% certified fresh, while they’ve been harder on House of Gucci at 62% fresh. Nonetheless, there’s a divide between critics and audiences, and it appears moviegoers are winning.

Sony/Screen Gems/Constantin’s Resident Evil: Welcome to Raccoon City posted an opening day of $2.5M at 2,803 theaters with an outlook of $7.7M over 3-days, and 5 day of $11.9M. Previous Sony genre films during the pandemic opened as follows: Don’t Breathe 2 $10.6M 3-day in mid-August, and Escape Room: Tournament of Champions debuted to $8.8M over 3-days in mid-July.

The movie, which features a soundtrack from Emmy-, Grammy- and Tony-winning Lin-Manuel Miranda, is expected to make $35M-$40M over the next five days. So far, Encanto is 94% fresh on Rotten Tomatoes off 67 reviews with a 95% audience rating from 100-plus verified ratings.

Among family movies during the pandemic with previews, Encanto is ahead of Universal’s The Boss Baby: Family Business, which did $1.3M on a Thursday afternoon starting at 4 p.m.; that pic however was also day-and-date on Peacock and theaters. Boss Baby 2 grossed $7.85M on its opening day. Working in Encanto‘s favor is 80% of K-12 schools off today, heading into 100% off over the next two days for Thanksgiving.

Among Tuesday previews for Disney’s original animated movies over Thanksgiving, all pre-pandemic, Encanto is ahead of Pixar’s 2015 The Good Dinosaur, which did $1.3M on Tuesday night before $9.76M Wednesday, and $55.4M over five days. Encanto is also ahead of Frozen, though that’s not really a like-for-like: That movie made $1.1M off 10 p.m. shows and was in release at one theater, the El Capitan, five days before it opened wide in 2013. Moana and Coco had Tuesday previews before Turkey day of $2.6M and $2.3M, respectively, but no one is expecting Encanto to reach those opening heights.

Listen to my conversation with Miranda below: 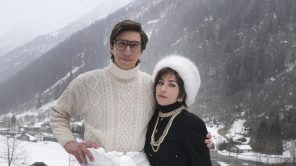 Adam Driver and Lady Gaga in ‘House of Gucci’ MGM

MGM/United Artists Releasing’s House of Gucci also fared well Tuesday, making $1.3M off 7 p.m. showtimes. The Ridley Scott movie, which is hoping that Lady Gaga’s fans shows up, is expected to clear in the mid- to high-teens over the five-day holiday. House of Gucci, which has a running time of 2 hours and 37 minutes, is 66% fresh on Rotten Tomatoes, but audiences so far love it better at 90%.

Black Friday is typically one of the highest-grossing days of the year, and it will be interesting to see if there’s any spillover of cash from the event movies into adult ones like House of Gucci. 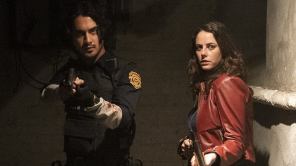 Sony/Screen Gems/Constantin’s Resident Evil: Welcome to Raccoon City had previews that started at 3 p.m. and made $935,000 from 2,352 theaters. The pic looks to clear low teens over five days per industry estimates, but Sony sees $8M-$10M. Resident Evil‘s Tuesday preview is just under Don’t Breathe 2‘s $965K Thursday preview, which resulted in a $4.39M opening day and $10.6M opening weekend. Both Don’t Breathe 2 and Resident Evil are rated R.

Among films in regular release, Sony’s Ghostbusters: Afterlife led Tuesday with an estimated $4.7M, up 23% over Monday, taking its five-day total to $52.5M.

Disney/Marvel’s Eternals posted $1.5M, +5% over Monday, for a running total of $139M in its third week. Further boosting the MCU brand, Hawkeye drops its first two episodes on Disney+ today.