Florida surpassed 50,000 coronavirus deaths since the pandemic began, health officials reported Thursday, with more than one-fourth of those succumbing this summer as the state battled a fierce surge in infections fuelled by the delta variant.

The U.S. Centers for Disease Control and Prevention tallied 50,811 deaths after adding more than 1,500 COVID-19 deaths provided Thursday by the state's Health Department. Those reported deaths occurred over various dates in recent weeks.

Florida has the 11th worst per-capita death rate among the 50 states, the CDC says. New Jersey, Mississippi and New York have had the worst, but Florida has risen from the 17th spot in the past two weeks.

Overall, about one in every 400 Florida residents who was alive in March 2020 has since died of COVID-19. Only cancer and heart disease have killed more Floridians during that period, according to state health department statistics. Those have each killed about 70,000 Floridians.

Gov. Ron DeSantis spoke sombrely when asked about surpassing 50,000 COVID-19 deaths during a Fort Lauderdale news conference promoting the use of monoclonal antibodies, a treatment for people infected with the disease that reduces death and hospitalization if given early.

"It has been a really tough year and a half," DeSantis said.

The Republican governor, who has advocated against mask and vaccine mandates, said the most recent wave, which began in June, has struck younger and healthier people. Numerous police officers and firefighters have died from the disease.

"It is affecting families in ways that we are not used to, so it has been really, really rough," DeSantis said. Out of about 50 people present at the news conference, DeSantis was the only one who did not wear a mask when not speaking. He has promoted vaccination and has been inoculated, but did not receive his shot publicly as many elected officials did. 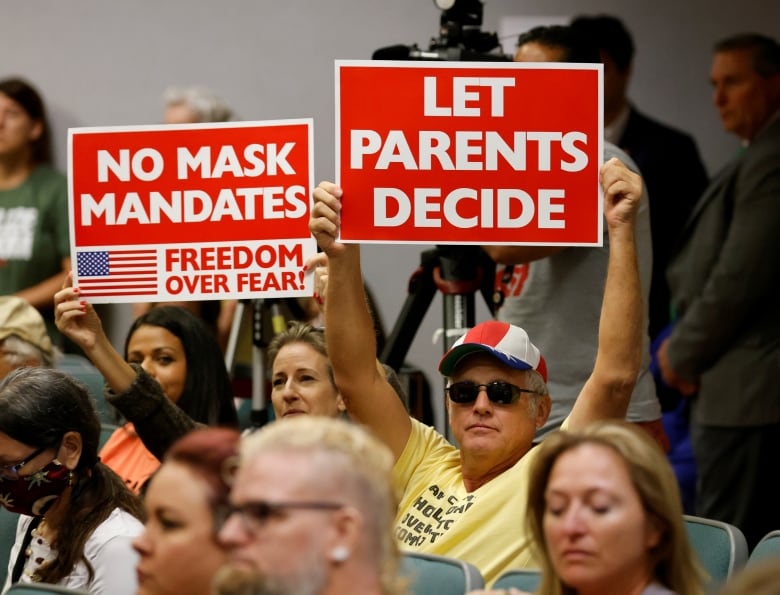 Residents hold placards as members of the Lake County School Board conduct an emergency meeting to discuss mask mandates to prevent the spread of COVID-19 in Tavares, Fla., on Sept. 2. (Joe Skipper/Reuters)

Epidemiologists say the state's rates of vaccination outpaced the national average, but it was not enough to keep the highly contagious variant at bay because of its outsized population of elderly people and low vaccination rates among younger groups they interact with.

On a per-capita basis, rural and semi-rural counties in central and north Florida were hit the hardest. Most of those counties have vaccination rates that are at or below the statewide average of 63 per cent of residents 12 and older. Florida counts someone as vaccinated if they have received at least one dose, even though both the Pfizer and Moderna versions both require two doses to be fully effective. 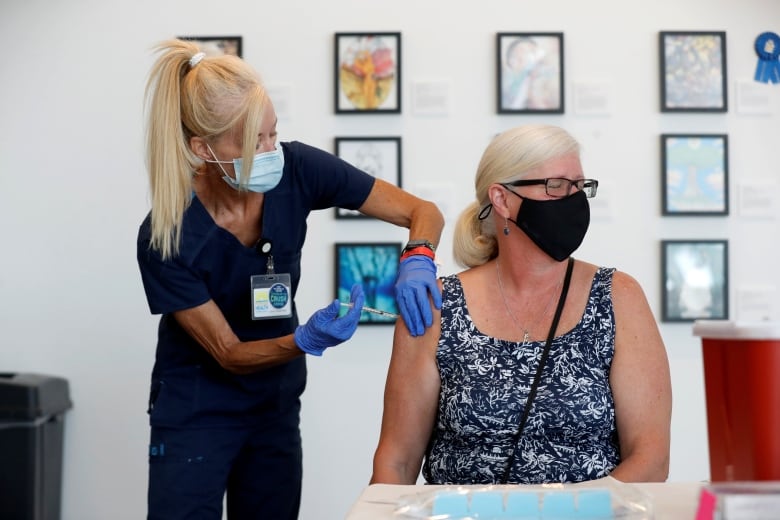 Registered nurse Michelle Falgout administers a dose of the Johnson & Johnson COVID-19 vaccine to Kerri Houston at a vaccination clinic at the Salvador Dali Museum in St. Petersburg, Fla., on Aug. 6. (Octavio Jones/Reuters)

Monroe County, which consists mostly of the Florida Keys, has seen the fewest deaths per capita — one for every 1,115 residents and one of the highest vaccination rates. Another tourist mecca, Orange County, home to Walt Disney World and Universal Orlando, had the third-lowest per capita death count.

Now, weeks since infections peaked, the state has seen steep drops in hospitalizations and infections. The number of COVID-19 patients in hospitals finally dropped below the 10,000 mark on Thursday with 9,917 patients, according to the U.S. Department of Health and Human Services. That number reached more than 17,000 on Aug. 23.

Deaths are expected to continue to climb for late August and early September because of the way they are logged in Florida and the lags in reporting. 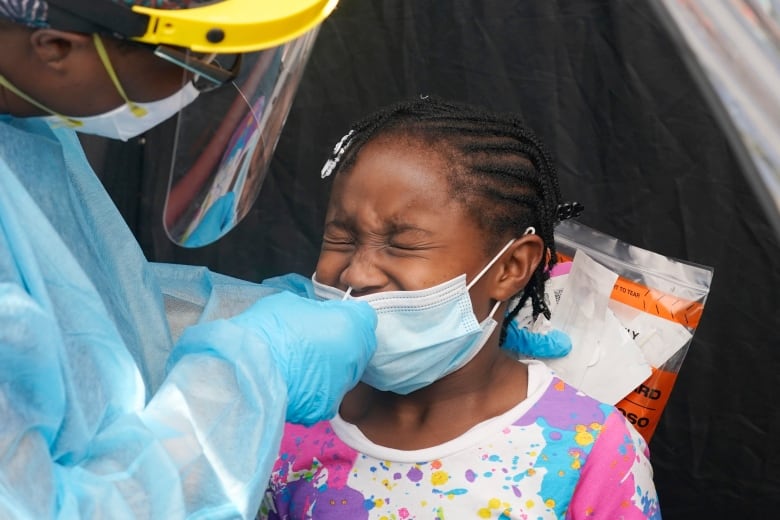 Sky Mavis hits $2B in sales for its NFT game...