From Henry Higgins to Acid-Head Huxley to Downton Abbey: Harry Hadden-Paton Has Range 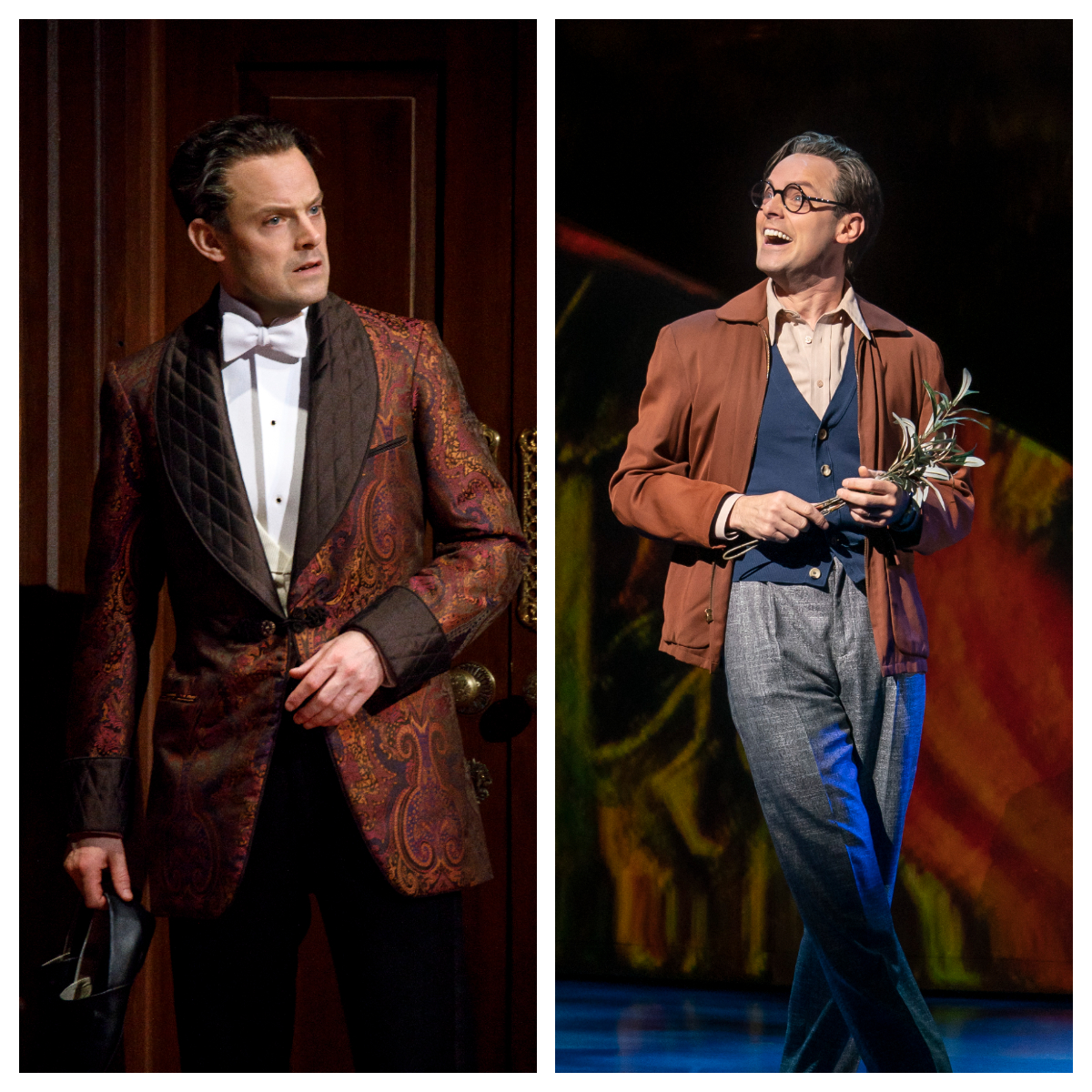 There’s a definite advantage to being 7th Marquess of Hexham, a.k.a. Herbert “Bertie” Pelham. Quite apart from bringing a happy ending (and a wedding ring) to Downton Abbey’s chronically unlucky-in-love Edith Grantham, the character has worked wonders for the actor playing him.


The immense popularity of that British series has extended the star power of Harry Hadden-Paton to these shores and given him the moxie to make his first professional musical forays over here. First, he was phonetics prof Henry Higgins, who finds (through proper speech) the laden princess in a scurvy flower girl in My Fair Lady. Now, he’s English writer Aldous Huxley tripping with Clare Booth Luce (Carmen Cusack) and Cary Grant (Tony Yazbeck) back in the ‘50s, when LSD was legal and therapeutic, in Flying Over Sunset, an emphatically fictional original musical from writer-director James Lapine, composer Tom Kitt and lyricist Michael Korie.

Both feats share the same sprawling space—the vast wilderness of the Vivian Beaumont stage. The first found room for the front of the Covent Garden opera house, the Embassy Ball and Higgins’ elaborately appointed study. The second is one gorgeous hallucination after another, the creative pay-off of Beowulf Boritt’s scenic designs and the projections by 59 Productions.


So what’s it like moving around and emoting amid such a ravishing, shifting backdrop? Hadden-Paton hasn’t a clue. “I’m told it looks lovely, but we can’t appreciate it,” he admits. “A lot of it happens without us really knowing. These were part of Beowolf’s design and the projection design so they were added after we’d done work on the text, the music, the dance, all that.”


Making sure his character doesn’t get lost in the scenery is Hadden-Paton’s big concern, and, to this end, he put in plenty of homework on the author of Brave New World. “If you’re playing real people,” he believes, “there’s a sort of responsibility to get it right for their memory and for the audience’s expectations. With Huxley, there was a huge amount of research to be done.”

That research helped him physicalize the role and find the heart of the character. “I didn’t realize how debilitating it was, but [Huxley] got an eye infection when he was 16. As an actor, you always want to take your character on a journey. That’s the most satisfying for me. With Eliza Doolittle, you’re going from street rat to princess. With Aldous, you’re going from a man secure in a lovely marriage to losing his wife—someone he depended on for emotional support, for physical support around the house. She’s a second pair of eyes for him. To lose her is a big deal, and then to come through the other side and feel like ‘Okay, I can possibly move on with my life.’ That’s a rewarding journey for me, so you kinda create a character in your head.


“There are interviews with Huxley on YouTube that I devoured. You can come up with a character that way, but then you have to respond to the text. Two and a half years ago when I did the bulk of the research, I think I knew too much about Huxley. I was over-researched, and it was getting in the way of the text because I would go, ‘He wouldn’t say it like that.’ A little enforced hiatus put some distance between me and that research, which was quite useful.”

For the 40-year-old actor “a lot of months of doing what everyone else was doing” ended six months ago, when Downton Abbey: A New Era went before the cameras. “To jump back into a show with lots of people I’ve known for years was a dream! We all love each other and get on—and we had a month in the south of France. They had to charter us a flight so our bubble was kept safe. We took over a whole hotel and had to quarantine in that hotel for a week. It was extraordinary, and the movie is just going to be full of humor and light and, I think, the perfect anecdote to what we’re all going through.”

Bertie and Emily are still sitting pretty in the storyline, awaiting their first-born. “What’s nice is that I’m now part of the Grantham family. In many ways, I’m part of the furniture. Edith’s happy ending is a huge climax because everyone was desperate for her sake to have some good luck in her life. When we begin the film, we’re in a position where that’s still going well.”


And with that, he closes the iron door on plot revelations, except to say the film should be in theaters by March of next year, because the box-office was too crowded this Christmas.

The 2019 Downton Abbey film centered around a visit from the King of England, George VI (played by Simon Jones, who is currently the stage doorman for LaChanze in Alice Childress’ Trouble in Mind at the American Airlines Theater). The last person to play King George VI (Sept.12-Oct. 20, 2019) was Harry Hadden-Paton in a Chicago Shakespeare Theater production of The King’s Speech, David Seidler’s play version of his Oscar-winning screenplay about the shy, unsure monarch overcoming his paralyzing stammer.


“It was wonderful,” Hadden-Paton recalls of his stage turn as King George VI. “The best thing for me was they offered my wife, Rebecca Night, the part of the queen, and we got to work together for the first time since we met, doing The Importance of Being Earnest on the West End.” (He was John Worthing, she was Cecily Cardew.)


There is a slight hitch to The King’s Speech: Hadden-Paton himself developed a stammer. “It took me a very long time to get rid of it. The other night I stuttered on stage and gave myself a real fright. I couldn’t get the word ‘public’ out. It was a weird feeling. There is sort of a lingering thing.”

There has been talk of doing The King’s Speech in New York, “but I don’t know what theaters in New York are like—especially at the moment. There are a lot of airplanes in the sky, and everybody’s waiting for the right moment. I’m in sort of an embarrassment of riches. There are a few things, and we’re just trying to sort out what’s going to work. If the pandemic has taught me anything, it’s not to plan because who knows what this omicron is going to do now?”


Before he was 7th Marquess of Hexam, Hadden-Patton was Martin Charteris, private secretary to Princess Elizabeth in the first season of the Netflix series, The Crown—and King George VI came up again. It fell to Charteris to tell Claire Foy her father was dead and she was queen.


There’s a reason he mixes well with the royal line. His godmother happens to be Sarah, Duchess of York. It’s not an active relationship, but “we’re in touch. She’s supportive of everything I do.”

How did this come about? Easy and early on. “My mum and my dad were friends with her as a lowly lady, a shop girl, long before she ever met a prince. I was five when she got married. We predate the royals, but it was exciting as a toddler to see my godmother—‘Fergie’—in the newspapers, then less so as they started to tear her down, as the British press is wont to do.”


When he was growing up, the name Harry didn’t really bother Hadden-Paton. “There weren’t many of us back then,” the actor remembers. “In fact, I was the first Harry to actually be a Harry in my family. Prince Harry came after me. Harry Potter came after me. Now, everyone is called Harry. If you ever go to Spain, be sure to say Harry Potter. That’s the way they will understand.”

Dwayne Johnson Rocks Out His Last Workout Of 2021!