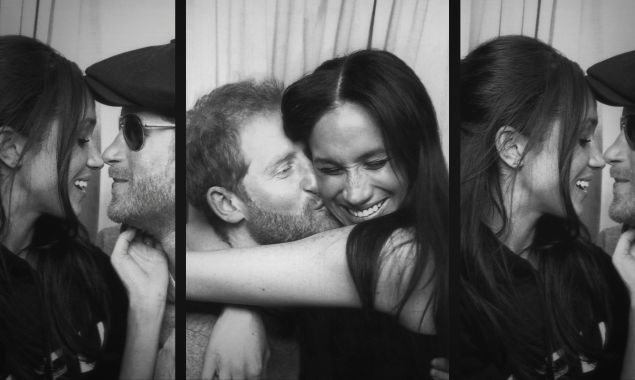 Watching Prince Harry and Megan Markle’s relationship unfold in the press has been like watching an extremely long car accident. It just keeps happening and happening, debris flying everywhere, and it never ends. After a while you may feel it becomes uninteresting and repetitive—and yet you continue to be compelled by the spectacle. There are a lot of opinions about Harry and Meghan, some valid and some borderline insane, but ultimately we can all agree: We’re sick of the drama and we’re curious about it in equal measure.

That seems to be the driving force behind Harry & Meghan, a Netflix documentary series that unveiled the first three of six parts this morning. At the helm is Liz Garbus, an Oscar-nominated, Emmy-winning filmmaker who has previously inspected the inner lives of celebrity figures in documentaries like Love, Marilyn and What Happened, Miss Simone? Garbus knows what she’s doing, which works in the series’ favor, but she’s also contending with a force much larger than the subject itself. The sheer amount of information, history, tradition and opinion looms beyond the frame here, which is evident in the initial episodes.


As the series opens, there is a hint of melodrama as the viewer is reintroduced to Harry and Meghan and their unlikely love story. And it’s presented as a love story to rival all great love stories, as the pair tells it to Garbus. That’s why both in turn sacrificed everything they knew to be with the other. Some of this is unnecessary—we all know most of it already—but because the couple are in control of their image in this version we get some additional details that are mildly compelling. The inclusion of self-shot footage, which the couple presumably captured for an inevitable documentary, is also new, but feels trite and self-indulgent.


As it continues, the first episode reflects back on Harry’s upbringing and the treatment of his mother, Princess Diana, by the press—again, largely information we know, though the parallel between Diana and Meghan is a critical one. But it’s really in episode two, if you can get that far, that the series becomes interesting. Garbus shifts to Meghan and her childhood, focusing on the duchess’ identity as a biracial woman. We know Meghan has been treated badly—egregiously so—by the British media, which has been inherently racist in their coverage of her. That discussion here is impactful and important. It helps explain why Harry and Meghan would submit to even more speculation and discussion in making this documentary series. It’s clear that they want to control the narrative, but it’s also clear that they want to use this as a platform to speak up about injustice.

Harry & Meghan is reasonably effective at making this point. It’s best when it comes from Harry, who describes being proud of his mixed race children and hoping to enact change. “I think it’s such a responsibility as human being that if you bring a small person into this world, that you should be doing everything you can to make the world a better place for them,” he explains. Later, the royal reflects on his white privilege and admits that the public response to Meghan helped him to realize that even the most open-minded people can only see the world from their own perspective. It’s valuable insight and it feels genuine. Although Harry has (uncomfortably) spent his life in front of cameras, he seems far less media trained than Meghan, which is to the benefit of this series.


As a documentary, Harry & Meghan is most successful when Garbus moves beyond Harry and Meghan’s personal lives and looks deeper at British society as a whole. The talking head interviews in episode three, discussing the racism that’s been long embedded in Britain, are particularly striking. There is an immovable traditionalism that’s present in British life, especially as it relates to class and race, and Meghan undeniably came up against that. Despite what new Prime Minister Rishi Sunak claims, England is a deeply racist place, although that plays out somewhat differently in the U.K. than it does in the U.S. Meghan’s presence brought that to the surface—and continues to—and it’s in that discussion that Garbus really hits on something worth focusing on.


The first three episodes, as breezy as they are, could have used more editing. Do we need to watch Meghan get her makeup done and chat about her kids? Not really. But when Harry explains the machinations of the U.K. tabloids and their relationship with the royal family, there’s some juicy stuff there. Certainly, the royals won’t like this series— “Megflix Rains Bombshells on Royals” was one of the many online headlines in the Daily Mail today—although Harry and Meghan are extremely careful never to speak poorly about anyone in either of their families. The negativity is directed at the media, who deserve it. In all likelihood, Harry & Meghan is just more fodder for those tabloids to dismiss and denigrate the couple. It may not change anyone’s mind. But the pair seem to banking on the hope that it might, which is in itself a worthwhile endeavor. 'Who wouldn't welcome getting a year or 2...