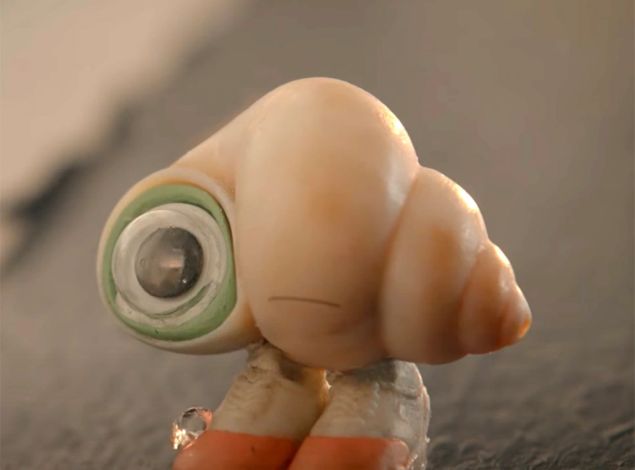 Many, many phrases from Marcel The Shell With Shoes On —the stop-motion adventures of a tiny shell with one eye and two shoes, grown from a web short and book into a feature film— are woven into the daily life of my house. When you’re uneasy about a task but are going to do anyway to make someone you love happy? “It would be my pleasure.” When you don’t know what something is made of but want to sound like you do? “The toenails of a man.” When you want to say I love you but make it sound a bit less it serious? “I love you.” And all of these are to be delivered in Jenny Slate’s Marcel voice: tentative, high-pitched and querulous, like the voice of an academic from the hills who’s come down for his weekly milk run and is making nice with the locals he’s a bit scared of.

Slate created the voice for Marcel in 2010, when she and her then-boyfriend Dean Fleischer Camp, director of Marcel, were at a wedding. Strapped for cash, they had to stay in a hotel room with four other people. “I suppose I just felt so cramped and so small, and as a joke, I started talking in this little, tiny voice that popped out of me,” Slate says. Back home in Brooklyn, Fleischer Camp had to make a short film he had promised for his friend’s comedy show, and he had to do so quickly, as he’d forgotten it entirely. To make Marcel, he used a snail’s shell, some modeling clay, a googly eye, and shoes that were “part of some rip-off Polly Pocket set” he found at a bodega. Combining stop-motion animation and live action, he “interviewed” Slate, and asked her to use the Marcel voice. Slate describes what came out as “the best version of me.”

“I would say Marcel is kind and confident, that he is earnest and takes himself seriously, but not too seriously,” Slate says. “He feels himself to be the exact size that he should be. Marcel is a natural performer but he isn’t selfish about that.” (There’s an organic gender statement that comes up during the full-length movie when someone calls Marcel “she.” The name sounds feminine to non-French speakers, and Slate’s voice is feminine, so it’s unclear how Marcel identifies. True to form, Marcel doesn’t make a big deal of it in the movie when he is mis-gendered.)

Marcel the Shell with Shoes On is now in theaters, a feature seven years in the making — though it origin point goes back to the night of that comedy show, twelve years ago, when a stranger asked Fleischer Camp to put the short he’s made online, so that her grandmother, who was bedridden with a broken ankle could see it. Thinking little of the web and social media, he and Slate posted the clip (which is still there). Marcel racked up thousands of views in only a few weeks, and after hitting several million, Slate and Camp made a second installment. The story of that online fame is referred to explicitly in the new film, which tracks Camp filming Marcel in a house where he lives with his Nana Connie. The human couple who lived there have moved away, taking an entire family of related shells with them. Finding that family is part of the plot, though the search is much less important than the relationship Marcel, Nana Connie, and Fleischer Camp have with each other.

Marcel rides around the house in a tennis ball and puts honey on his shoes to walk up the walls. He uses a rope tied to a blender’s tines to shake nuts out of a tree and watches 60 Minutes with Nana Connie. (They both really love Lesley Stahl.) It’s telling that Fleischer Camp originally put the movie online for a total stranger who’d asked him to do so on behalf of her grandmother—two acts of kindness. Marcel is like that, writ large—a profound, gentle, uncompromising gesture. We should be glad that Slate and Fleischer Camp insisted on making the movie independently.


“Yeah, one production company wanted us to team up Marcel with some kind of crimefighter type,” Fleischer Camp told me. “There was simply no point doing this if we weren’t going to be true to who and what Marcel is.”


“I think it’s important to put all of it in the movie and  say, ‘I don’t really want to fall in line with the rest of how other movies are being made,’” Slate says. “Not that I feel that I’m an upstart revolutionary, but I have a thing that I see.”

She adds, “I think sweetness and kindness are often paired with cuteness and sappiness.”


That kindness is an intense part of the film. Marcel cares for his grandmother and adjusts to the fans who become obsessed with him, often without the kindness he himself exhibits. When Marcel says, “Dean, do you ever consider the fact that your life might be a little more integrated and a little less lonely if you took time to connect with someone and not just make videos about them?” it seems not unfair to suggest this may have been something Slate once said to Fleischer Camp years ago, not without kindness.


Isabella Rossellini voices Nana Connie with an elegance and gravitas that helps dispel any notions that these animated characters might be cutesy or simple-minded. Perhaps Marcel will be seen by kids or marketed to them, but nothing about the movie or what happens within it are childish.

“For me right now, especially being a new mom, it’s about dignity,” Slate told me. “There’s a way to be kind and protect your own dignity, and the dignity of your community, while also putting up limits. Marcel’s really just trying to figure that out.” In Season 4 ‘Westworld’ Is More Comprehensible...