As Italy heads to the polls this Sunday to elect its next government, the country looks set to take its sharpest turn to the right since Benito Mussolini.

Four years ago, Giorgia Meloni's Brothers of Italy party, named after the opening words of the country's national anthem, was a hard-right outlier that had a mere four per cent of the vote, its post-Fascist origins and angry nationalist rhetoric too much for most Italians.

Since then, Meloni, 45, has gone from little sister status among Italy's right-wing parties, including the anti-immigrant League led by Matteo Salvini and Silvio Berlusconi's Forza Italia, to dominating them. Latest polls put Brothers of Italy at 25 per cent — twice that of the League — and place Meloni in position to head a right-wing coalition that could capture enough votes for an unprecedented "super majority" in parliament.

Observers say Meloni has got there through savvy, patient strategizing. A fractious centre-left whose main Democratic Party, several points behind the Brothers of Italy and whose leader Enrico Letta has all but conceded defeat, hasn't hurt.

"The whole campaign of the centre-left has been, 'Vote for us because if [the right-wing coalition] wins, it's going to be a disaster,'" said Cecilia Emma Sottiletta, professor of politics at the American University of Rome.

Unlike the League, Meloni opted out of joining Italy's latest coalition government led by Mario Draghi. The former European banker began shepherding the country toward post-pandemic recovery with the help of massive EU funds in early 2021, until key coalition members yanked their support this summer and he announced he'd step down.

2 months ago
Duration 3:23
Italian Prime Minister Mario Draghi resigned Thursday after key coalition allies boycotted a confidence vote, signalling the likelihood of an early election and a renewed period of uncertainty for Italy and Europe at a critical time.

In the meantime, Meloni, outside the government, was able to scoop up all the opposition airtime as she softened her tough-as-nails image, publishing what would become the bestselling autobiography, Io Sono Giorgia, I Am Giorgia.

In it, she shares stories of being bullied as a girl because of her weight, along with screeds against what she — like Hungary's far-right leader Viktor Orban whose "illiberal" government she so admires — considers the main threats to Christian European values: elite-driven political correctness, LGBT lobbies, Brussels bureaucrats, global banking conspiracies and "invasions" of migrants across the Mediterranean Sea.

Observers say the prospect of Meloni as Italy's next prime minister, exactly one century after Fascist leader Benito Mussolini came to power, is proof of Italy's failure to face its Fascist past.

But support for the hard-right leader also comes from her adroitness at fashioning herself both as an anti-establishment and a strongman alternative in a country that's been in political turmoil since the '90s, when corruption scandals brought an end to post-war political order. Since then, observers say, voters have been drawn to "new" solutions to old problems — from billionaire media empresario Berlusconi and the Five Star protest movement to the technocrat Draghi, initially hailed as Super Mario.

"Meloni is benefitting from the huge wave of discontent that characterizes the Italian electorate," said Sottiletta. "She's able to convincingly present herself as an alternative because she hasn't been part of a government in a few years."

She's also charismatic, whipping up crowds in deafening campaign tirades and owning her political foes on talk shows with her trademark Roman sarcasm. 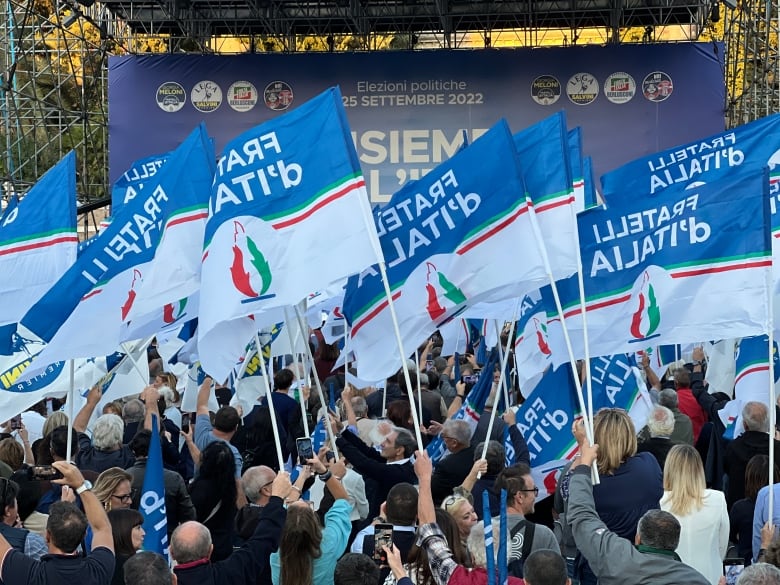 Thousands of supporters gathered at the closing rally of the right-wing coalition three days before the Italian election, with the far-right Brothers of Italy party led by Meloni expected to win. (Megan Williams/CBC)

'She wasn't at all part of this community'

Meloni became politically active in her teens when she joined the tiny group of youth militants in the marginal post-Fascist Italian Social Movement, located at the edge of the working-class, leftist Rome neighbourhood of Garbatella.

"She frequently references Garbatella as a way to signal she's a woman of the people, tough, plain-talking, a commoner," said historian of the neighbourhood and author Gianni Rivolta. "But this is an outdated version of our neighbourhood and a stereotype of who lives here. It's true she partially grew up here, but she wasn't at all part of this community and doesn't reflect it in any way." 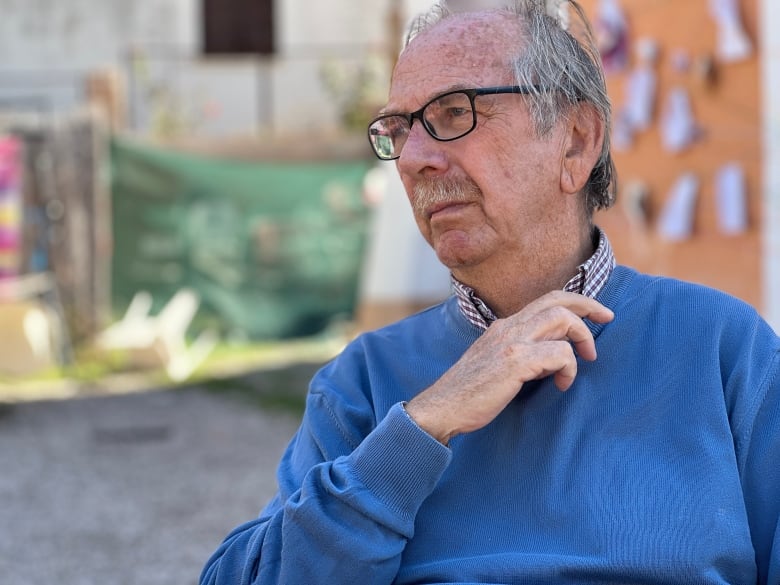 Historian of the Rome working class neighbourhood of Garbatella, Gianni Rivolta, says Meloni often references the neighbourhood to signal she is 'of the people'. (Megan Williams/CBC)

At the morning food market in the neighbourhood, most locals asked said they will not be voting for Meloni. But not everyone — an indication of her widening appeal beyond a nucleus of far-right followers.

Fruit vendor Giasmine Sokari, who immigrated to Italy from Morocco 35 years ago, fondly recalls Meloni and her mother shopping at her stall before they moved out of the neighbourhood. Sokari says she's open to voting for the far-right because she supports their stance against same-sex marriage and on abortion restrictions and is unfazed by the anti-migrant rhetoric.

"We foreigners are like guests, we need to respect the rules," she said. "I've never experienced racism in Italy because I respect the rules… Now it's a mess, with people crossing to Italy on boats and boarding planes. Let's hope it gets resolved." 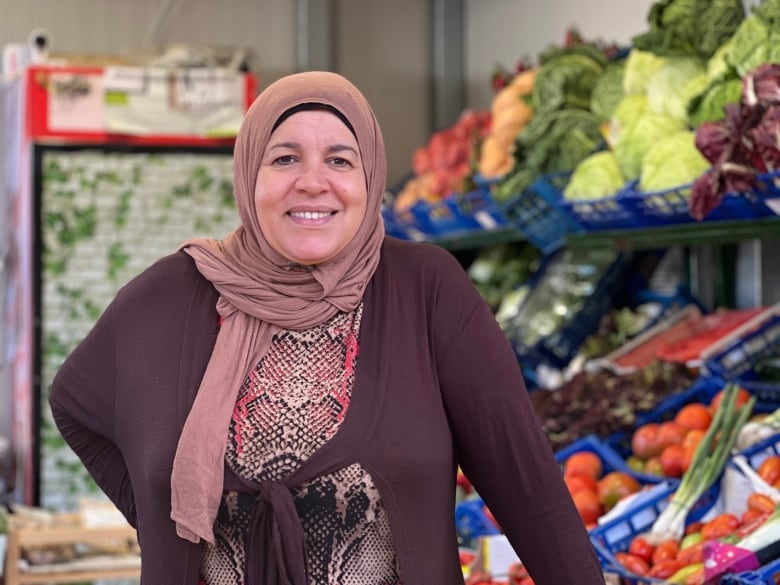 Fruit vendor Giasmine Sokari is pictured in the Rome neighbourhood of Garbatella, Italy, in September 2022. She sold fruit to Meloni and her mother, and says she supports some of her policies. (Megan Williams/CBC)

Meloni's calls for naval blockades in the Mediterranean to push back migrants leaving North Africa have, however, diminished closer to elections.

"She and Salvini are really honestly concerned about the cultural, religious effects of immigration," said Roberto Menotti, political expert and editor-in-chief of Aspenia Online. "But stopping flows across the entire Mediterranean would cost a huge amount of money. That's why the naval blockade idea was dropped. It's total craziness."

Meloni has promised that if elected, she will continue Draghi's cautious fiscal policies and unity with the European Union and NATO in supporting Ukraine against the Russia invasion. But with a recession possibly looming, inflation and energy costs spiking, and a historically massive public debt, Meloni will have her hands full. 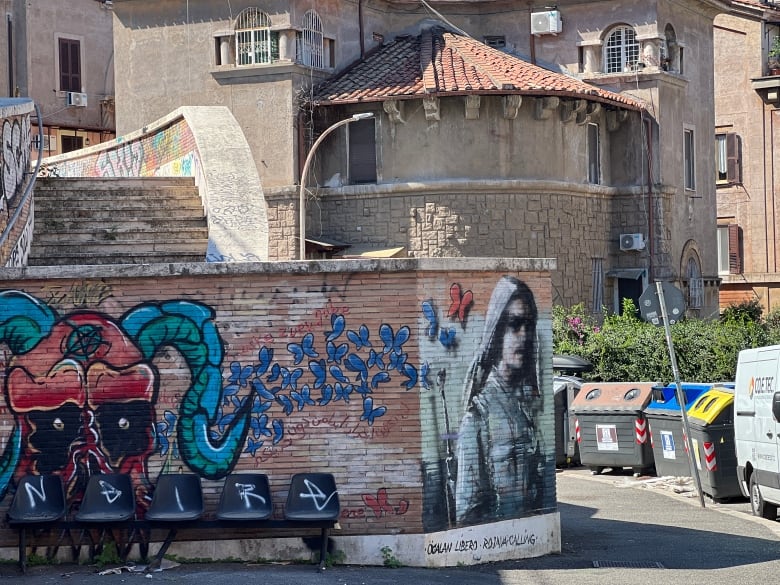 An image from Garbatella, the working-class, leftist neighbourhood in Rome where far-right leader Meloni grew up. (Megan William/CBC)

Menotti says if the far-right forms Italy's next government he'll be watching most closely how they'll deal with France and Germany.

"France and Germany are Italy's two major trading partners and have huge weight in all decisions made at the European Central Bank, where we borrow our money,' he said, "Yet they have constantly criticized them. So I wonder how, once in power, they'll deal with this diplomatic dilemma." She held up a Lebanese bank for her own money....