Lawyers for Johnny Depp questioned the truthfulness of his ex-wife Amber Heard's claim that Depp sexually assaulted her with a liquor bottle as Heard was cross-examined Tuesday after her testimony in Depp's libel suit against her.

Depp is suing Heard in Virginia's Fairfax County Circuit Court over a December 2018 op-ed she wrote in the Washington Post describing herself as "a public figure representing domestic abuse."

His lawyers say he was defamed by the article even though it never mentioned his name. The trial is now in its fifth week.

Depp's lawyer, Camille Vasquez, questioned Heard about a variety of incidents in which she says she was assaulted by Depp.

Questioning was particularly intense over a March 2015 fight the couple had in Australia, shortly after they were married, while Depp was shooting a fifth film in the Pirates of the Caribbean franchise. 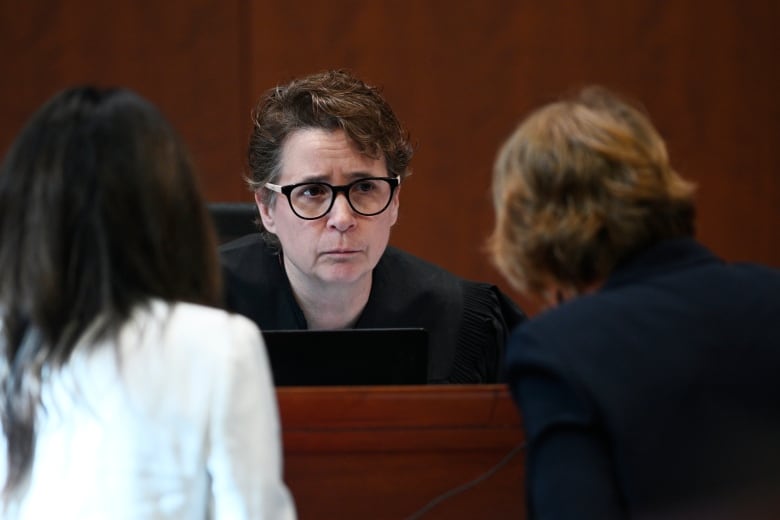 Judge Penney Azcarate speaks to lawyers from the bench at the trial on Tuesday. (Brendan Smialowski/The Associated Press)

It was during that fight that Heard says she was sexually assaulted. Depp, on the other hand, says he was the victim, and that he lost the tip of his middle finger when Heard threw a vodka bottle at him.

Vasquez questioned why Heard never sought medical attention, even though she said her feet were cut by broken glass and she was bleeding after the attack.

"You're the one who assaulted someone with a bottle in Australia, isn't that right, Ms. Heard?" Vasquez asked.

Vasquez then questioned why Heard wrote a series of love notes to Depp in the months after she was assaulted.

Heard has said she believed Depp had hit rock bottom after the Australia fight and was committed to sobriety. She has said most of the assaults occurred while Depp was under the influence of drugs or alcohol.

"When things were good, they were really good," she said.

Support is available for anyone who has been abused or assaulted. You can access crisis lines and local support services through the Ending Violence Association of Canada database. The Canadian Women's Foundation's Signal For Help is a silent, one-handed gesture to use in a video call to indicate that you are at risk of violence at home. ​​If you're in immediate danger or fear for your safety or that of others around you, please call 911.