Powerful explosions rocked a Russian air base in Crimea and sent towering clouds of smoke over the landscape Tuesday in what may mark an escalation of the war in Ukraine. At least one person was killed and several others were wounded, authorities said.

Russia's Defence Ministry denied the Saki base on the Black Sea had been shelled and said instead that munitions had blown up there. But Ukrainian social networks were abuzz with speculation that it was hit by Ukrainian-fired long-range missiles.

Videos posted on social networks showed sunbathers fleeing a nearby beach as huge flames and pillars of smoke rose over the horizon from multiple points, accompanied by loud booms. Crimea Today News said on Telegram that witnesses reported fire on a runway and damage to nearby homes as a result of what it said were dozens of explosions. 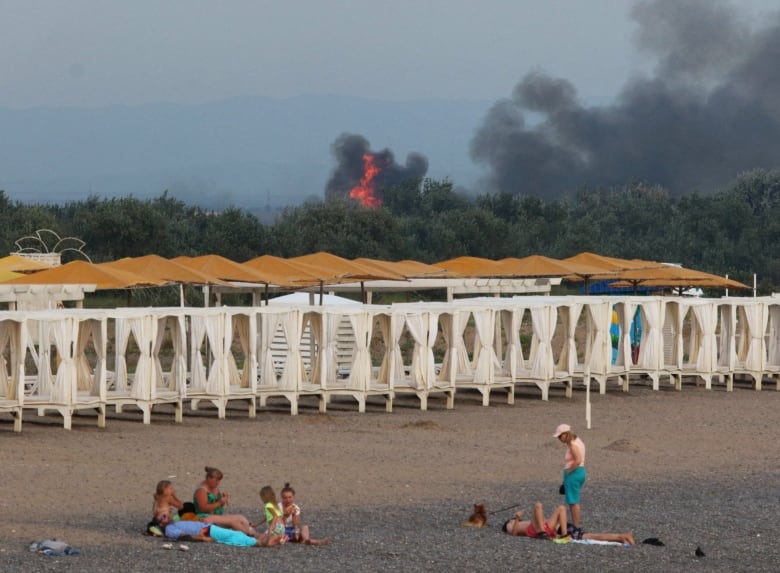 People rest on a beach as smoke and flames rise after explosions at the Russian military air base in Novofedorivka. (Stringer/Reuters)

Russia's state news agency Tass quoted an unidentified ministry source as saying the explosions' primary cause appeared to be a "violation of fire safety requirements." The ministry said no warplanes were damaged.

Ukraine's Defence Ministry said sarcastically on Facebook: "The Ministry of Defence of Ukraine cannot establish the cause of the fire but once again recalls the rules of fire safety and the prohibition of smoking in unspecified places."

During the war, Russia has reported numerous fires and explosions at munitions storage sites on its territory near the Ukrainian border, blaming some of them on Ukrainian strikes. Ukrainian authorities have mostly remained mum about the incidents, maintaining an ambiguous stand.

If Ukrainian forces were, in fact, responsible for the blasts, it would mark the first known major attack on a Russian military site on the Crimean Peninsula, which the Kremlin annexed in 2014. A smaller explosion last month at the headquarters of Russia's Black Sea fleet in the Crimean port of Sevastopol was blamed on Ukrainian saboteurs using a makeshift drone.

Russian warplanes have used the Saki base to strike areas in Ukraine's south on short notice.

Crimea's regional leader, Sergei Aksyonov, said ambulances and medical helicopters were sent to the base and the area was sealed off within a radius of five kilometers.

One person was killed, according to Aksyonov. Crimean health authorities said six people were wounded, one of whom remained hospitalized. Others were treated for cuts from shards of glass and were released.

Officials in Moscow have long warned Ukraine that any attack on Crimea would trigger massive retaliation, including strikes on "decision-making centers" in Kyiv. 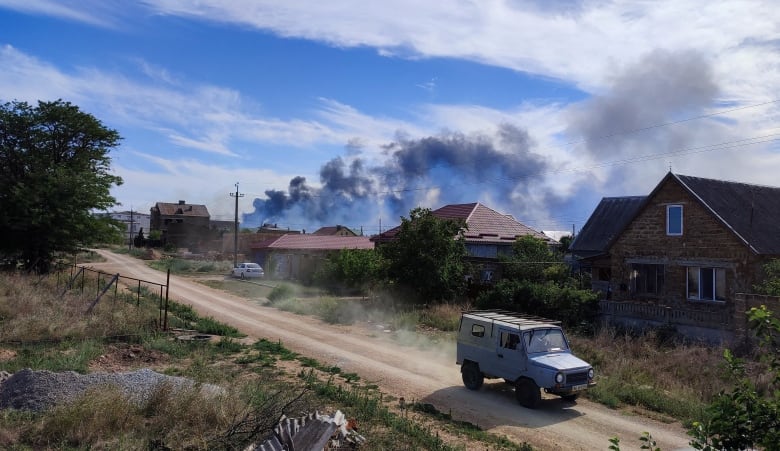 Local witnesses said they had heard at least 12 explosions around 3:20 p.m. local time from the air base near Novofedorivka. (Stringer/Reuters)

Attack on town near nuclear plant

Earlier Tuesday, Ukrainian officials reported at least three Ukrainian civilians were killed and 23 wounded by Russian shelling in 24 hours, including an attack not far from the Russian-occupied Zaporizhzhia nuclear power plant.

The Russians fired more than 120 rockets at the town of Nikopol, across the Dnieper River from the plant, Dnipropetrovsk Gov. Valentyn Reznichenko said. Several apartment buildings and industrial sites were damaged, he said.

Ukraine and Russia have accused each other of shelling the power station, Europe's biggest nuclear plant, stoking international fears of a catastrophe.

In his nightly video address Monday, Ukrainian President Volodymyr Zelenskyy invoked the 1986 disaster at the Chernobyl nuclear plant in Ukraine. He called for new sanctions against Russia, accusing it of risking another nuclear disaster.

"We are actively informing the world about Russian nuclear blackmail," he said.

A Russian-installed official in the partially occupied Zaporizhzhia region said an air defence system at the plant would be reinforced in the aftermath of last week's shelling. Evgeny Balitsky, head of the Kremlin-backed administration, told Russian state TV that power lines and other damaged portions of the plant were restored.

"The plant is operating normally but, of course, with an increased degree of security," Balitsky said.

19 hours ago
Duration 1:56
The UN is urging inspectors with the International Atomic Agency to be allowed access to Ukraine's Zaporizhzhia nuclear plant to check for radiation leaks after the site came under fire again over the weekend.

The head of Ukraine's state nuclear power firm warned on Tuesday of the "very high" risks of shelling at the Zaporizhzhia nuclear power plant in the Russian-occupied south and said it was vital Kyiv regains control over the facility in time for winter.

Energoatom's chief, Petro Kotin, told Reuters in an interview that last week's Russian shelling had damaged three lines that connect the Zaporizhzhia plant to the Ukrainian grid and that Russia wanted to connect the facility to its grid.

Some of the shelling landed near storage facilities for spent fuel, an area that has 174 containers of highly radioactive material, Kotin said, warning of the dangers of them being hit.

"This is ... the most radioactive material in all the nuclear power plant. This would (mean) the distribution (of it) around this place and then we will have like a radiation cloud and then the weather will decide ... which direction the cloud goes," he said.

Kotin said Russia wanted to connect the plant to its grid, a technically difficult process that requires the facility to be severed from the Ukrainian system before it can be gradually connected to the Russian one.

"Their plan is to damage all the lines from the Zaporizhzhia nuclear power plant. After that it will not be connected to the Ukrainian power system," he said.

The nuclear plant has six reactors and produced 20-21 per cent of Ukraine's electricity needs before the war, he said. It urgently needs renovations that have yet to be carried out, he added.

"For winter season, we urgently need to remove these Russians from there, then to renovate infrastructure," he said.

Around 500 Russian troops are currently at the facility with heavy vehicles, and the plant is being used as a base, he said.

Kotin said the best solution would be for Russian troops to withdraw and for the plant to be returned to Ukrainian control. Peacekeepers could be sent in to guard the facility, he said.

WATCH | No confirmation Canadian soldiers are in Ukraine: