Lamont Dozier, part of arguably the most successful songwriting team in pop music history at Motown Records and beyond, has died. He was 81.

Dozier's death was revealed in social media posts by his son Lamont Dozier Jr. as well as singer Ray Parker Jr., a longtime collaborator. A cause of death was not given.

Dozier, along with Eddie and Brian Holland, were inducted into the Rock and Roll Hall of Fame (1990) and the Songwriters Hall of Fame (2009) after a career highlighted by dozens of chart hits, including a whopping 10 No. 1 pop singles for The Supremes, including Where Did Our Love Go, Baby Love, Come See About Me, Stop! In The Name of Love and You Can't Hurry Love.

Known as a master of melodic arrangement, Dozier also co-wrote the Motown hits Heat Wave and Nowhere to Run by Martha and the Vandellas, This Old Heart of Mine by the Isley Brothers and Marvin Gaye's How Sweet It Is (To Be Loved by You). 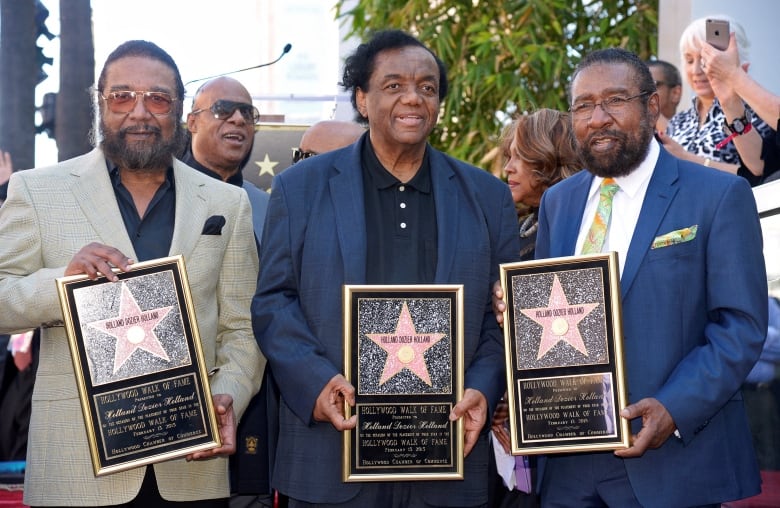 From left to right, Eddie Holland, Lamont Dozier and Brian Holland receive a star for Holland-Dozier-Holland on the Hollywood Walk of Fame in Los Angeles on Feb. 13, 2015. (Phil McCarten/Reuters)

"There's a mystical dimension to being a songwriter that's hard to describe," Dozier said in his 2019 memoir, How Sweet It Is: A Songwriter's Reflections on Music, Motown and the Mystery of the Muse. "Sometimes you think a song should be one way, but that song will tell you if it's meant to be something else entirely. Don't fight it."

Holland-Dozier-Holland forged a strong ongoing relationship at Motown with The Four Tops, writing songs of unrequited and lost love tailored to Levi Stubbs's aching vocals. Their compositions I Can't Help Myself (Sugar Pie Honey Bunch) and Reach Out I'll Be There went to the top of the Billboard charts, with It's The Same Old Song, Standing in the Shadows of Love and Bernadette landing in the Top 5.

"I loved them all but for me, Bernadette would epitomize the Holland-Dozier-Holland genius for capturing a listener's ear and not letting it go," Motown founder Berry Gordy said in his 1994 autobiography, To Be Loved: The Music, the Magic, the Memories of Motown.

In an interview with CBC's Q in 2020, Dozier explained that many of his songs, including Bernadette, drew on real-life experiences and people.

"She was my first muse, you might say," Dozier said of a girl who was a schoolboy crush. "She was somebody I remembered every time I sat down to write a song. And in later years, I thought about her, and the way I felt, and I was able to conjure up those feelings to write other songs, thinking about Bernadette."

Holland-Dozier-Holland, seeking more autonomy that Gordy couldn't provide, eventually moved on from Motown in the late 1960s. They formed Invictus Records, where they continued to place songs on the R&B and pop charts, highlighted by Freda Payne's Band of Gold and Give Me Just a Little More Time by the Chairmen of the Board.

Dozier was born in Detroit on June 16, 1941. Detroit's Black population had tripled from 1940 and 1960, and Dozier was part of the wave of emerging talent who sang in church choirs, high school talent competitions and on street corners. 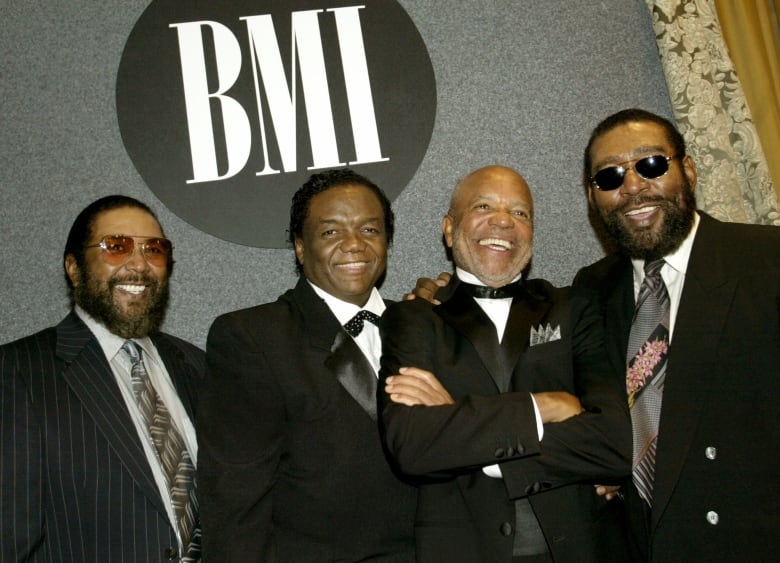 From left to right, Eddie Holland, Lamont Dozier, Berry Gordy and Brian Holland are shown on May 13, 2003, when Holland-Dozier-Holland were awarded the Broadcast Media Inc. (BMI) ICON award, given to songwriters who have had unique and indelible influences on generations of music-makers. (Robert Galbraith/Reuters)

While just a teenager, Dozier's group The Romeos cut music for Atco Records, and Dozier himself — as Lamont Anthony — sang a handful of songs under Motown's rubric until forging the partnership with the Holland brothers, working first with the Marvelettes.

"What Motown mostly did was bring people together," Dozier told Mojo Magazine in 2018. "Because those were really troubling times in the '60s and people were at odds with each other. Music, it's a cure for a lot of the ills and the prejudices and all that stuff."

As was the case with some other Motown songwriters, a few early Holland-Dozier-Holland efforts didn't quite find the right formula for the talented but struggling Supremes trio of Diana Ross, Mary Wilson and Flo Ballard.

But the floodgates opened with 1963's Where Did Our Love Go, the first of five consecutive No. 1 hit singles the wrote for the Supremes, a streak up to and including Back In My Arms Again in 1965.

After leaving Invictus to the Hollands a decade later, Dozier struck out on his own. Beginning in 1974 with Out Here on My Own, he would release a dozen solo albums under his own name.

In the 1980s, a collaboration with Phil Collins yielded the hit Two Hearts, Alison Moyet charted with his song Invisible and Simply Red also sought out the Motown legend.

"RIP dear Lamont Dozier. One of the greatest songwriters of all time," Mick Hucknall, lead singer for Simply Red, said Tuesday on Twitter. "Truly privileged to have written 4 songs together."

Dozier told CBC's Q that even after all of his accomplishments, "you have to put it in the work."

"As many hours as you can during the day," he said. Serena Williams 'evolving away from tennis,'...