“All of the information to date points to the need for us to prepare for the likelihood of significant transmission in the upcoming weeks,” warned Los Angeles County Director of Public Health Barbara Ferrer today.

That’s saying something given that L.A. yesterday reported 6,529 daily Covid infections — which is very nearly the highest total the county has seen since early February — and it already has a 7-day test positivity rate of 13.8%. That’s up virtually an entire point in 24 hours from yesterday’s 12.9% and more than double what it was a little over two weeks ago at 6.5%. For a number that is not only a percentage of total tests but also a 7-day average, those are massive jumps.

The county’s test numbers are an undercount, according to Ferrer, since they don’t include the results from the over-the-counter kits that many now use.

The elevated daily test positivity rate “likely represents the higher rate of transmission that’s associated with the highly-infectious Covid sub variants and also the decline in routine testing at schools,” which was much more comprehensive than in the community-at-large and so included many who wouldn’t normally be tested.

The 7-day average number of new Covid-related hospitalizations is now 109 per day. Ferrer called that “a stunning increase” from the 84 new cases per day reported last week. Today’s new hospitalizations average is also 78% higher than what it was just a month ago.

There is now concern again about increasing stress on the healthcare system.

The raw number of number of Covid-related new cases at area hospitals has risen to what’s effectively a four-month high (since February 3) at 808. The 7-day average of such hospitalizations is now 8.1 per 100,000 residents. That’s up from 6.6 new daily Covid admissions per 100,000 residents just yesterday. If that number reaches 10 per 100,000 and stays there for two weeks, L.A. Public Health officials have said they will reinstitute an indoor public mask mandate. The current projection is that that will happen by July 19.

But there are other variables.

“With the more infectious [BA.4 and BA.5] variants, with people taking less precautions and us coming into a holiday weekend, that really could…lead to an increase in cases,” said Ferrer.

“People are not heeding our recommendations that people put their masks back on indoors now,” she continued. “I’m just suggesting everyone do their part.” 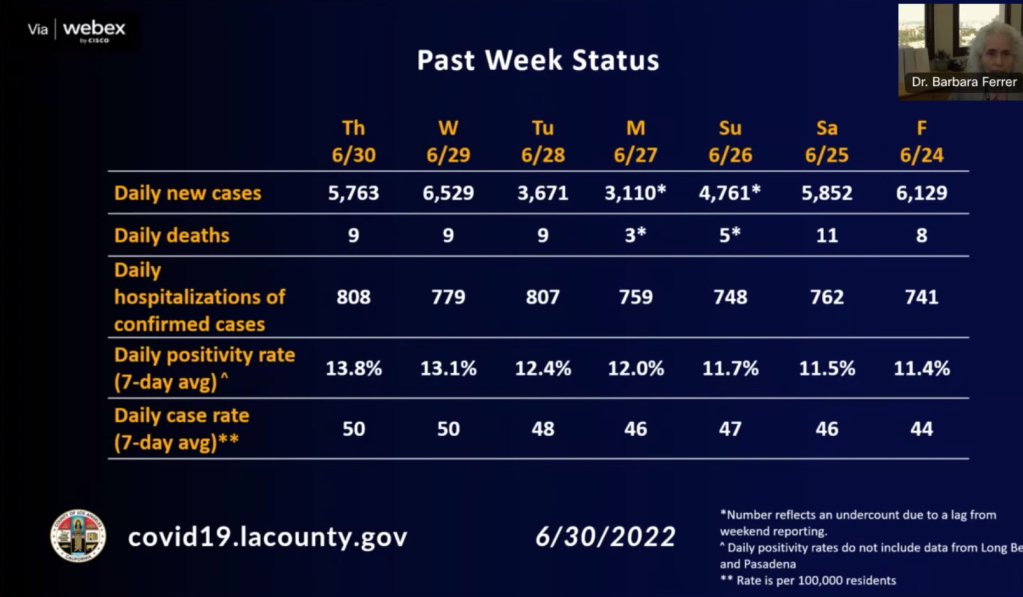 Jesy Nelson Is Back In Studio Ahead of Solo...