It’s been eight years since Italy’s key film and TV market MIA kicked off in Rome and each year its popular co-production market and pitching forum seems to go from strength to strength.

This year the strand, which is already established in drama, documentary and feature film sections, has spread its tentacles to include animation and will see local producers looking for high-profile financial partners and co-production deals get the opportunity to showcase their projects before an audience of industry professionals and top international players from global studios, OTT platforms, broadcasters, production and distribution companies as well as agents and financiers.

This year, Deadline can reveal that there are already some standout pitches across all segments that are sure to drum up interest starting with Crimson Crown, the first series exec produced by Italian master of horror Dario Argento. Being pitched in the MIA drama section, Argento will also direct the first episode of this series which is created by Bafta crew member Mandi Riggi and internationally co-produced by Media Musketeers, Incognito Films and IlBe Entertainment. The series follows the dynamics of a group of estranged friends who, after sharing a secret pregnancy pact years before, need to protect their daughters against a mysterious murderer from their past.

In its MIA doc pitching session, there’s a one-off series dubbed Moscow Nights, a German-Irish co-production that takes a look at the meetings between superpower leaders such as Ronald Regan, George Bush and Bill Clinton with Mikhail Gorbachev and Boris Yeltsin between 1987 and 1991.

In the newer animation section, a standout project is The Black Diamond Race, produced by prominent Italian animation production company Gruppo Alcuni. Created by Sergio and Francesco Manifio, story sees a wealthy Maharaja challenged to a car race for a prize of four priceless diamonds. 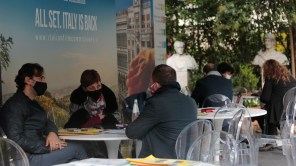 “More big companies in the world are really focusing on local projects,” says Gaia Tridente, MIA’s new director for 2022. “What is totally reshaping global production is that everyone is looking for something that works in terms of story and not just in terms of corporate action based on some elements that refer to different countries. It’s totally effecting a new way of producing and writing stories.”

She points to the success of local Italian hit My Brilliant Friend, based on Elena Ferrante’s book series, which was just renewed by HBO and Italian public broadcaster RAI for its fourth and final season.

“It’s a real local story based in Naples about two girls coming of age, speaking an Italian dialect but at the same time it’s a strong story that goes to HBO and engages and moves audiences all over the world.”

“I think it’s an exciting time for artists,” says Tridente. “In my job, I hope that I can give the same attractive offering that MIA has done in the past while also branching into new segments.”