Melvin Van Peebles, the groundbreaking filmmaker, playwright and musician whose work ushered in the "blaxploitation" wave of the 1970s and influenced filmmakers long after, has died. He was 89.

In a statement, his family said that Van Peebles, father of the actor-director Mario Van Peebles, died Tuesday evening at his home in Manhattan.

"Dad knew that Black images matter. If a picture is worth a thousand words, what was a movie worth?" Mario Van Peebles said in a statement Wednesday. "We want to be the success we see, thus we need to see ourselves being free. True liberation did not mean imitating the colonizer's mentality. It meant appreciating the power, beauty and interconnectivity of all people."

But he was best known for Sweet Sweetback's Baadasssss Song, one of the most influential movies of its time. The low-budget, art-house film, which he wrote, produced, directed, starred in and scored, was the frenzied, hyper-sexual and violent tale of a Black street hustler on the run from police after killing white officers who were beating a Black revolutionary.

With its hard-living, tough-talking depiction of life in the ghetto, underscored by a message of empowerment as told from a Black perspective, it set the tone for a genre that turned out dozens of films over the next few years and prompted a debate over whether Black people were being recognized or exploited. 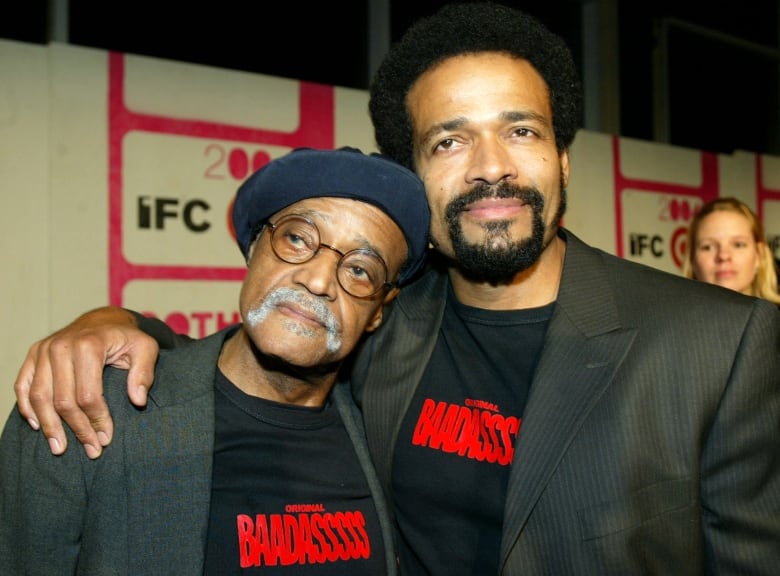 "All the films about Black people up to now have been told through the eyes of the Anglo-Saxon majority in their rhythms and speech and pace," Van Peebles told Newsweek in 1971, the year of the film's release.

"I could have called it The Ballad of the Indomitable Sweetback. But I wanted the core audience, the target audience, to know it's for them," he told The Associated Press in 2003. "So I said 'Ba-ad Asssss,' like you really say it."

Made for around $500,000 US (including $50,000 US provided by Bill Cosby), it grossed $14 million US at the box office despite an X-rating, limited distribution and mixed reviews from critics. The New York Times, for example, accused Van Peebles of merchandizing injustice and called the film "an outrage."

Van Peebles, who complained fiercely to the Motion Picture Association over the X-rating, gave the film the tagline: "Rated X by an all-white jury." 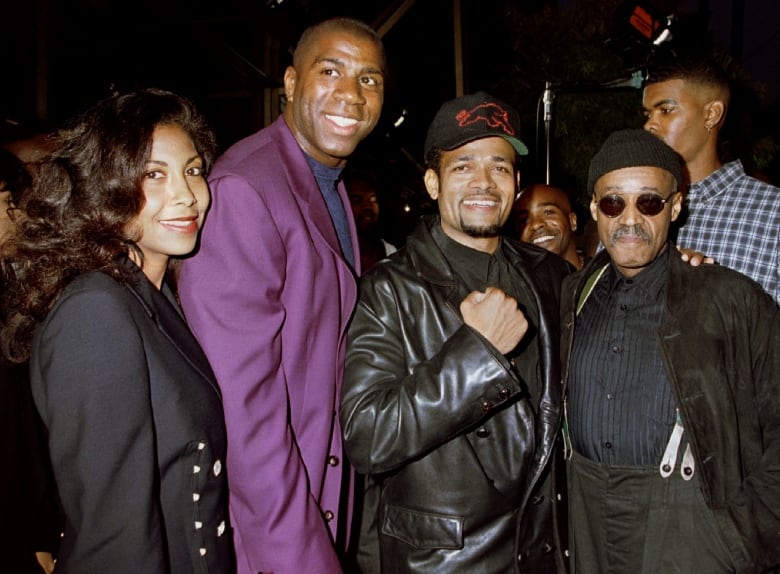 NBA legend Magic Johnson, second from left, and his wife, Cookie, left, arrive with Panther director Mario Van Peebles and Melvin Van Peebles, who wrote the screenplay, at the film's benefit premiere for Johnson's AIDS Foundation on May 2, 1995. (Fred Prouser/Reuters)

But in the wake of its success, Hollywood realized an untapped audience and began churning out such box office hits as Shaft and Superfly that were also known for bringing in such top musicians as Curtis Mayfield, Marvin Gaye and Isaac Hayes to work on the soundtracks.

Many of Hollywood's versions were exaggerated crime dramas, replete with pimps and drug dealers, which drew heavy criticism in both the white and Black press.

"What Hollywood did — they suppressed the political message, added caricature — and blaxploitation was born," Van Peebles said in 2002. "The coloured intelligentsia were not too happy about it."

In fact, civil rights groups like the NAACP and the Congress of Racial Equality coined the phrase blaxploitation and formed the Coalition Against Blaxploitation. Among the genre's 21st-century fans was Quentin Tarantino, whose Oscar-winning Django Unchained was openly influenced by blaxploitation films and spaghetti westerns.

On Wednesday, a younger generation of Black filmmakers mourned Van Peebles's death. Barry Jenkins, the Moonlight director, said on Twitter: "He made the most of every second, of EVERY single damn frame."

He made the most of every second, of EVERY single damn frame and admittedly, while the last time I spent any time with him was MANY years ago, it was a night in which he absolutely danced his face off. The man just absolutely LIVED pic.twitter.com/IIpfU8wI7q—@BarryJenkins“You have to not let yourself believe you can’t. Do what you can do within the framework you have. And don’t look outside. Look inside.”

― the iconic artist, filmmaker, actor, playwright, novelist, composer and sage Melvin Van Peebles, who has gone home at the age of 89. pic.twitter.com/36BQKzN9G7—@avaDamn. Rest In Peace Melvin Van Peebles. The blueprint and inspiration for multiple generations of filmmakers. A whole legend. https://t.co/CfHBbXqIgT—@MatthewACherry

From Broadway to Wall Street

After his initial success, Van Peebles was bombarded with directing offers, but he chose to maintain his independence.

"I'll only work with them on my terms," he said. "I've whipped the man's ass on his own turf. I'm No. 1 at the box office — which is the way America measures things — and I did it on my own. Now they want me, but I'm in no hurry."

Van Peebles then got involved on Broadway, writing and producing several plays and musicals, including the Tony-nominated Ain't Supposed to Die a Natural Death and Don't Play Us Cheap. He later wrote the movie Greased Lighting starring Richard Pryor as Wendell Scott, the first Black race car driver.

In the 1980s, Van Peebles turned to Wall Street and options trading. He wrote a financial self-help guide entitled Bold Money: A New Way to Play the Options Market. 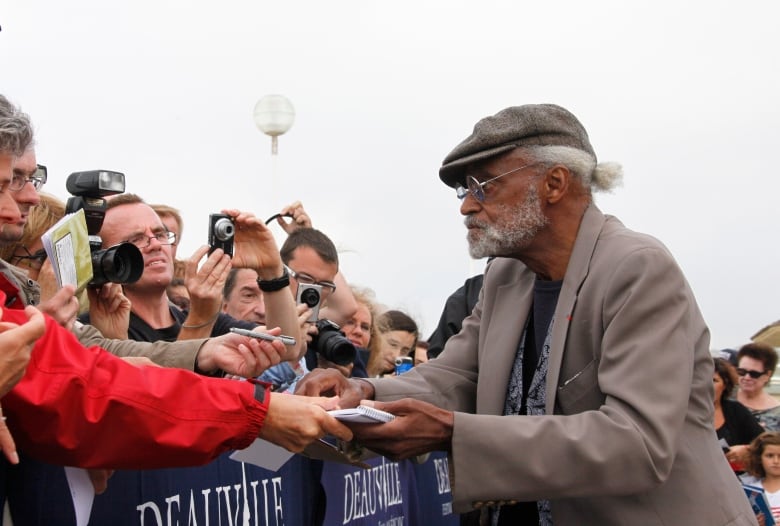 Van Peebles signs autographs for fans during a tribute to his career at the 38th American Film Festival in Deauville, Normandy, France, in 2012. (Michel Spingler/The Associated Press)

Born Melvin Peebles in Chicago on Aug. 21, 1932, he would later add "Van" to his name. He graduated from Ohio Wesleyan University in 1953 and joined the air force, serving as a navigator for three years.

After military service, he moved to Mexico and worked as a portrait painter, followed by a move to San Francisco, where he started writing short stories and making short films.

Van Peebles soon went to Hollywood, but he was only offered a job as a studio elevator operator. Disappointed, he moved to Holland to take graduate courses in astronomy while also studying at the Dutch National Theatre.

Eventually he gave up his studies and moved to Paris, where he learned he could join the French directors' guild if he adapted his own work written in French. He quickly taught himself the language and wrote several novels, one of which he made into a feature film.

La Permission/The Story of the Three Day Pass was the tale of an affair between a Black U.S. soldier and a French woman. It won the critic's choice award at the San Francisco film festival in 1967, and Van Peebles gained Hollywood's attention.

The following year, he was hired to direct and write the score for Watermelon Man, the tale of a white bigot (played by comic Godfrey Cambridge in white face) who wakes up one day as a Black man.

With money earned from the project, Van Peebles went to work on Sweet Sweetback's Baadasssss Song.

Van Peebles' death came just days before the New York Film Festival is to celebrate him with a 50th anniversary of Sweet Sweetback's Baadasssss Song. Next week, the Criterion Collection is to release the box set Melvin Van Peebles: Essential Films. A revival of his play Ain't Supposed to Die a Natural Death is also planned to hit Broadway next year, with Mario Van Peebles serving as creative producer.

StreamElements raises $100M in latest round