A column chronicling events and interviews on the awards circuit.

This week it is the final chance for Emmy voters to be heard as ballot deadlines loom, an honor at the Academy Museum Of Motion Pictures that not only recognized a veteran Asian filmmaking powerhouse but the Asian Pacific industry community as well, plus an interview with two-time Emmy winner Courtney B. Vance who has thoughts on the state of this country on a day many are worried about its future.

For all you straggling Emmy voters, get your act together. You have this final weekend to get those ballots in (due Monday night), and it seems like no one is letting up on their campaigns. The calls keep coming in: “Hi, it looks like some time opened up on Miles Teller’s schedule. I know it’s a long shot but….” or “Is it still possible to do an interview for Annie Live!?”

Hulu had a lunch Wednesday at The London with producers of Only Murders in the Building, followed by “a toast” with stars Martin Short and Selena Gomez. Showtime’s Yellowjackets continued its campaign to hijack the spotlight from more entrenched contenders by sending out a brown leather Cluci satchel with a hiking survival kit inside, something that just might come in handy if these loooooong Emmy seasons get any longer. And yet another FYC ad-infested edition of Emmy Magazine just arrived full of reminders including an elaborate booklet with multiple pages detailing each and every single episode of the Apple TV+ Comedy Series hopeful The Afterparty.

Well, you get the idea. Nominations are announced July 12, not a moment too soon.

JANET YANG GETS HER PILLAR AT THE ACADEMY MUSEUM 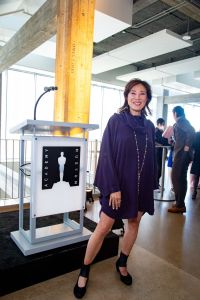 On Tuesday night I took a break from all the Emmy action and made  a trip to the Academy Museum of Motion Pictures for an unveiling ceremony and rooftop dinner on behalf of veteran industry stalwart Janet Yang, who among other things serves on the board of governors for the Academy of Motion Pictures Arts & Sciences.

In a seeming effort to milk every inch of the museum for naming opportunities (and why not?), the actual pillars of the former 1939 May Co building are being dedicated to various notables in the business including the newest being Yang — right there on the third floor across from Christopher Nolan and Emma Thomas’ pillar. These historically protected pillars were baked into museum architect Renzo Piano’s designs for the transformation into the long-gestating Academy Museum, and in addition to Yang’s and the Nolan’s there are other pillars dedicated to the likes of Barbra Streisand, Miky Lee, J.J. Abrams and Katie McGrath, Jeff Skoll, Lauren and Jason Blum, Bob Iger and Willow Bay, and Tom Hanks and Rita Wilson, all major supporters.

Keeping within the season, Yang happens to be an Emmy-winning producer as well as one of the most prominent Chinese Americans in the industry including as founder of Gold House, the nonprofit collective of  Asian cultural leaders, and many other credits. She is rumored among names who could be running to be the next AMPAS president when David Rubin’s term ends later this summer.

It is certainly a time of great change at the Academy, and I caught up with museum director and president and incoming AMPAS CEO Bill Kramer, who will be formally taking over the position held by Dawn Hudson for the past 11 years (Hudson was scheduled to be at the event honoring Yang but was struck by a positive Covid test. Rubin was there).

Kramer is clearly full of ideas and enthusiasm for his new job, already doing prep in order to be ready on day one, all the while still handling all the museum business. This was a smart choice for the Acad’s board, especially when you consider the importance of the success of the museum going forward. Who better to be in a new job that also oversees the museum? Reportedly since opening last fall, more than a half million visitors have entered the doors there. 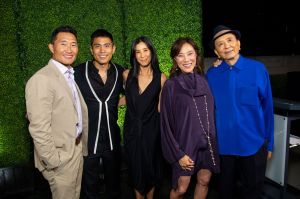 It was also great to see 93-year-old actor James Hong, enjoying a career resurgence with a great part in the indie smash Everything Everywhere All At Once, among the strong turnout for Yang from the Asian Pacific community. Hong has an incredible 453 acting credits (and counting) on his IMDb page for a career going back 68 years. He didn’t speak, but many others did essentially, turning the naming of this pillar in something resembling a Life Achievement Award dinner, and with all Yang has done for the Asian community as well as the impressive lineup of film credits represented by posters along the entrance to the dinner, it is well deserved. 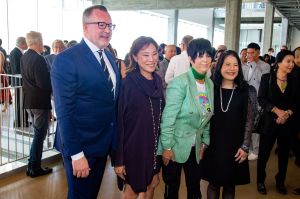 Among others at the unveiling ceremony was newly minted Honorary Oscar winner Diane Warren, who just that day had been named one of the latest group of recipients of the Governors Awards. When I caught up with her she was still reeling from it all even though she was informed on the 16th and had to keep quiet until the press release went out on the 21st. “I still want to win one someday for Best Song,” the 13-time nominee laughed, “but this seems like a very big deal. I am the first songwriter to ever get this honor.”

Indeed she is, although the music branch has had three previous composers take home honorary Oscars including Alex North, Lalo Schifrin and Ennio Morricone — the latter actually finally winning a competitive Oscar for his Hateful Eight score just a few years after being voted the Honorary award.

Several current governors were on hand to fete Yang including one at my table who said the selection process for this year’s Governors Awards honorees (also including Euzhan Palcy, Peter Weir and Jean Hersholt Humanitarian Michael J. Fox) was one with virtually no conflict and lots of agreement. That isn’t always the case.

COURTNEY B.VANCE BACK IN THE COURTROOM

Actor Courtney B. Vance won his first Emmy – Outstanding Lead Actor in a Limited Series –  playing the infamous Johnnie Cochran in The People Vs OJ Simpson. He was back on the Emmy stage just last year winning Guest Actor in a Drama Series for Lovecraft Country. And now this season there is Emmy buzz again for his return to the courtroom as fictional public defender Franklin Roberts in the acclaimed AMC series 61st Street which will be getting an already shot second season on a date to be determined. He defends a promising young athlete unjustly caught up in the corrupt Chicago legal system, and once again he delivers some pretty powerful arguments in the series which also explores his personal life with an activist wife played by Aunjanue Ellis, who also co-starred with him in Lovecraft Country, the HBO series that got a ton of Emmy nominations only to be canceled shortly thereafter. Vance is still surprised by that. “It’s my second, you know, big show that I’m in that ends up going that way. I remember we did Flashforward, and they did the same thing. They did a big cliffhanger and then left us hanging, but that’s the way of the world,  but we just keep pushing, right, Pete?,” he laughed. 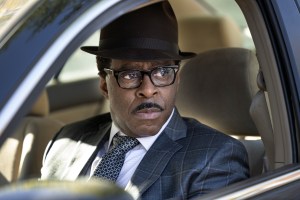 One thing Vance has always done is ‘keep pushing’. In addition to Lovecraft he was also in another Emmy contender last year playing C.L. Franklin in Genius: Aretha opposite Cynthia Erivo. But he’s equally as excited to be involved in 61st Street which has much to say and is a series he says welcomes input from the actors. For that he praises showrunners Peter Moffat (Your Honor), himself a former lawyer, and David Shanks, a former police officer, both making the case for authenticity in this show that examines the divide between judicial and police systems and two families caught up in them. The fact he got imput was key. 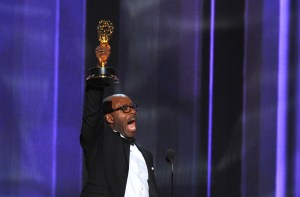 “And it was so necessary for us to be able to have them to be able to bounce things off of. They went above and beyond in terms of reaching out to the community, reaching out to the African American community, spent a lot of time in that courtroom, that courthouse and seeing the beige and brown and Black faces wrapped around the outside of the building going down the block for their basically four minutes of face time with their public defender, and they (producers) spent time there, a lot of time there just to be able to get the feeling and the spirit of the desperation and of the hopelessness and the helplessness that these folks are dealing with or living with, and so, that I know had an effect on the writing and on the experience that they had, and that’s what they wanted to set up, ” he said proud of what the collective cast and crew were able to achieve, with more to come. He emphasizes the importance of being part of projects that have real meaning to the state of the country and the world, projects however bleak that can still shine a light and give hope. 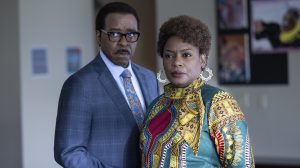 “That attack on the Capitol on January 6, it’s just a reminder to us that we need to pay attention. We need to talk to each other. We need to begin again. We can’t keep going the way we’re going because that was appalling, ”  he said.  “For our own people to do that to themselves, and then in this age of, this social media age, those pictures go around the world, and you know, we’re the laughingstock…  it should force us to look at ourselves and to realize that’s the furthest extreme. We cannot go back there or past there without dire, dire consequences, and so, I have to have hope because this grand experiment of ours called the democracy is based on hope and faith, and that’s what we have to do. There’s always work to be done, and you know, Martin Luther King’s speech, ‘I Have a Dream’, is about that, that there’s a check that they’ve come to cash, and that it cannot say insufficient funds. It must be cashed.”

Those are important words and powerful to think about on this particular week with the 1/6 committee unveiling almost daily some pretty shocking revelations about the near-loss of democracy, and the Supreme Court taking away women’s rights to make decisions about their own body by overturning Roe vs Wade, while the day before asserting anyone’s right to conceal and carry guns with little exception. What will be interesting is not just to see how all this affects political elections, but also the show business kind with Oscars and Emmys and how those voters choose to perhaps make a statement with what they nominate and what wins.  TV and movies have always had a very critical voice in moving the needle. Let’s see where the mood takes us in 2022 and beyond.

Now get out and vote, but start with your Emmy ballot.

Chris Evans Thinks Adam Driver Would Be Best To...