Home /
Entertainment /
Oscar-Shortlisted Doc ‘The Queen Of Basketball’ Tells Story Of Forgotten GOAT Of Women’s Game: “She Was Absolutely Extraordinary”

Oscar-Shortlisted Doc ‘The Queen Of Basketball’ Tells Story Of Forgotten GOAT Of Women’s Game: “She Was Absolutely Extraordinary”

In the mid-1970s when the horn sounded for a Delta State University Lady Statesmen’s basketball game, center Luisa “Lucy” Harris could not be stopped.

“The pass comes into No. 45 in the lane, she spins to the basket, elevates. Score!”

That scene was repeated over and over again as she led her team to three straight college national championships, earning tournament MVP each time. Not only that, when the Olympics finally added women’s basketball in 1976, she scored the first points in competition history, and led the U.S. women to the silver medal at the Montreal games.

Harris “held the distinction of being the [Olympic] team’s leading scorer and leading rebounder,” notes the Naismith Memorial Basketball Hall of Fame, where she is enshrined. “Lusia Harris-Stewart was big, relentless, and dominated the painted area like no woman before her.”

Despite earning her place in the hoops hall, Harris’s incredible accomplishments have largely been forgotten—even the remarkable fact that she became the first and only woman ever officially drafted by an NBA team (chosen in 1977 by the New Orleans Jazz). But the Oscar-shortlisted short documentary The Queen of Basketball, part of the New York Time Op-docs series, is helping restore Harris’s legacy. 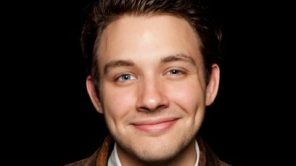 Proudfoot, who earned an Oscar nomination last year for A Concerto Is a Conversation (co-directed with Kris Bowers), found out about Harris through a friend. With help from The New York Times he tracked down Harris in Mississippi where she was born and raised and still lives, and reached her by phone.

“I was so excited to speak to her and told her who I was and asked her if she would be interested in talking to me and talking about her story,” Proudfoot recalls. “And she very simply said, ‘Sure, come on, come on over.’” 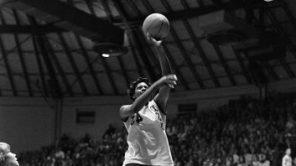 “It was in July in the middle of the pandemic. Brandon and I literally packed a van and drove across the country to Greenwood, Mississippi, and just camped out there, and figured out a way that we could safely do the interview and spent a lot of time getting every element of the story down,” he tells Deadline. “You could zero in on a specific game and Lucy could tell you how it went with the narrative of the game and how she performed. Her memory was really at the highest level of recall that I have ever encountered.”

Harris, now 66, spoke of her modest upbringing in Minter City, Miss., the 10th of 11 children.

“We went without,” she says in the film. “But we didn’t want for anything.”

She would reach the height of 6’ 3”. Growing up, she recalls, kids teased her with a rhyming taunt: “Long and tall and that’s all.” 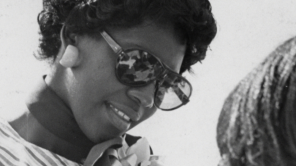 In 1972, not long before Harris graduated from high school, Title IX became law, vastly expanding the opportunities for women athletes at all levels, including college. A women’s basketball program was started at Delta State in Cleveland, Miss., under coach Margaret Wade. Harris joined the team and quickly turned it into a powerhouse.

Their foremost rivals were the Mighty Macs of Immaculata College, a Catholic university in Pennsylvania. The Mighty Macs boasted some ardent supporters, outfitted in black and white, as Harris told the director during their interviews.

“She says, ‘Oh yeah, the crowd was filled with nuns and the nuns were beating on buckets,’” Proudfoot says. “And I’m listening to this and I’m not understanding what she’s saying, ‘But okay, keep going with the story.’ And, sure enough, we scanned the [archive] film and there are the nuns and they’re beating on buckets to distract the other team.”

As Harris and Delta State go up against Immaculata in the suspenseful title contest, the film score thunders with “Gloria in excelsis Deo,” complete with choir.

“Our composer, Nick Jacobson-Larson, added drumline elements, so that’s a compound between the Vivaldi and the drumline sound that he crafted,” Proudfoot says. “That was a suggestion from Stephanie [Owens], our editor… That’s probably my favorite sequence.”

The Mighty Macs may have had the nuns on their side, but the Lady Statesmen prevailed.

“The ‘divine spirit’ ended up with Lucy,” says Proudfoot. “The glory was with her.”

Harris turned down the chance to try out for the New Orleans Jazz and, instead, concentrated on raising a family, and she became the basketball coach at her high school alma mater. In The Queen of Basketball, she is open about experiencing mental health challenges at times as an adult, a condition diagnosed as bipolar disorder. 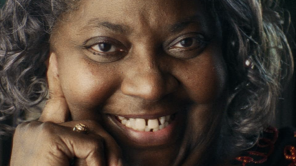 “I chose to include it because Lucy chose to tell me,” Proudfoot explains. “I remember her telling me during the interview that specifically she wanted to talk about that because she wanted to erode the stigma around mental health.”

Shaquille O’Neal, himself one of the greatest centers in basketball history, watched The Queen of Basketball and afterwards approached Proudfoot about becoming an executive producer on the film.

“When I saw it, it kind of made me cry,” Shaq revealed in an exclusive interview with Deadline. “I said to myself, ‘I got to do whatever it takes to bring this story to the world…’ I want to see Lusia on the Oscars, the red carpet, want to see this woman get her shot. I want her to have that moment where she gets to talk to an even bigger audience, to be able to inspire the future generations.”

The NBA legend praises Harris for sharing about her mental health struggles.

“I think she was brave. I think she was honest,” O’Neal says. “There are a lot of athletes coming out discussing their mental health and it’s also brave of them.”

“He’s got a huge heart,” Proudfoot says of Shaq, “and he’s got a huge reach, not just literally, but in terms of the audience that he has built. It was a knee-bucklingly humble experience that he would want to help tell this story… He’s doing it because, like me, Lucy’s story lights him on fire. It’s a passion thing for him.” 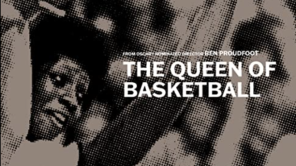 Harris knows that had she been born a male, her basketball talent likely would have earned her a fortune, as it did for near-contemporaries like Magic Johnson and Larry Bird. She muses about what opportunities in life wealth might have opened up, but the Lucy of The Queen of Basketball voices no regrets. She’s almost bashful about all she achieved, and endearingly self-effacing.

“She does not seek the spotlight. Her friends and family would probably describe her as shy, as private,” Proudfoot notes. “She’s extremely oriented around other people, making sure you’re okay… She’s just incredibly humble… You’re sitting with this truly extraordinary human being who has achieved more than almost anybody in the same field. And you would never know it.”

8 Tom Brady To Be Featured In Future Netflix Comedy Roast