Parallelz has raised $3 million for its tech that enables mobile games and apps to run instantly in a browser with no loss in quality, no downloads, no performance losses, and no need to change the coding. You can get instant gratification in starting a game or an app.

It has raised a relatively a small amount of money, but Parallelz could be quite strategic in creating change across the mobile industry, as its platform could challenge the app store duopoly that extracts a 30% fee from the gaming ecosystem, according to Parallelz CEO Albert Lai.

And that platform is simply the web, which has grown up from the days when it couldn’t run cool graphics. In an interview with GamesBeat, Lai said that he has been dreaming about this for more than a decade, ever since the company started working on HTML5 technology and instant gaming on the web.

Parallelz has created a software platform that will enable entirely new ways to distribute and discover mobile applications. The funding, sourced from prominent industry leaders and venture investors, will help the technology company grow its team and accelerate platform development.

This is not just a rehash of HTML5, where games had to be converted to the HTML5 and had massive performance and capability limitations and also had to be rebuilt from scratch. Nor is it the same as instant games that run on Facebook, which Parallelz helped create. The problem was that Apple had control over what Facebook could or couldn’t do on mobile.

By contrast, Parallelz has no limitations on content type or how it’s built. It supports any type of content or game engine, and does not require rebuilding the apps or games in HTML5. It does not require a software development kit (SDK), and it doesn’t lose any quality or suffer from latency, Lai said.

“It has instant access, or basically what should impossible,” Lai said. 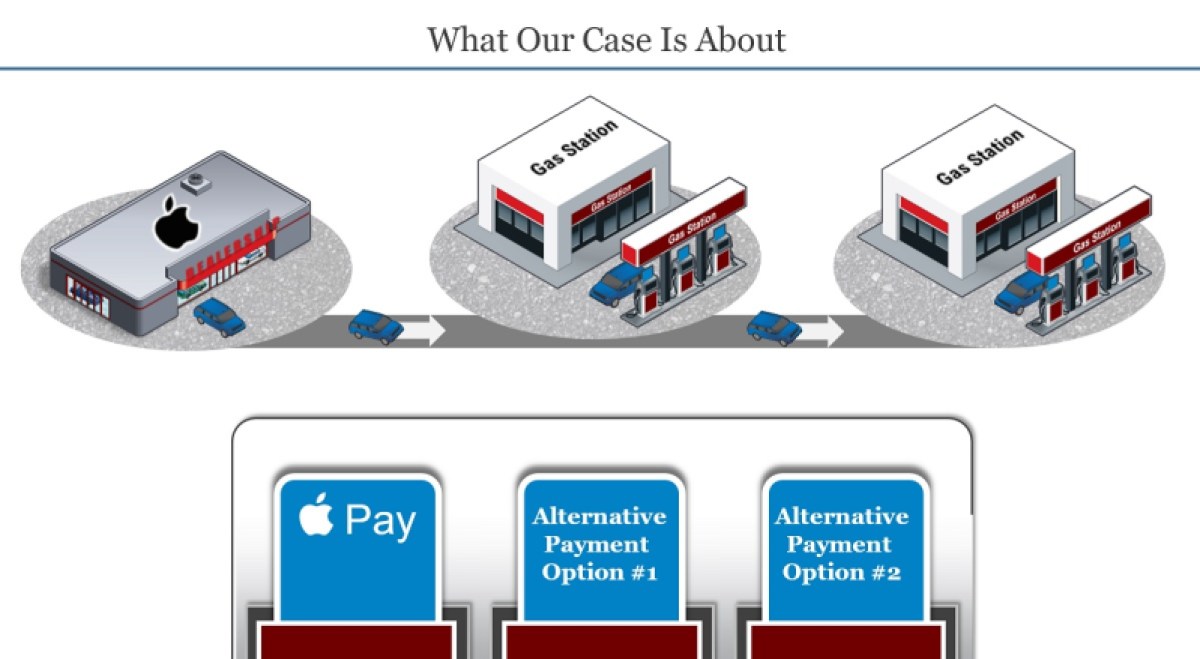 Epic’s argument about its antitrust case. Apple’s tax is like paying a fee every time you gas up a car.

What matters about this is that downloading an app is often a significant barrier to instant gratification. If you ask someone how many apps they’ve downloaded in a week, most will say none, Lai said. There is too much of a barrier, and that stands in the way of games or apps getting used as much as they could be. You also can’t deep link into the most exciting part of a game, or the level your friend is playing. And you could share that link with an influencer or a spectator and get them into a game instantly.

“We have had a suboptimal way of doing distribution,” Lai said. “With the App Store, there is only one place you can get stuff. It’s so inefficient. There is a discoverability challenge” and ever-rising ad rates.

And so what this does is enable a return of virality as a primary way for apps and games to get noticed. Instead of having to spend a ton of money on ads to find elusive users (particularly in the age where Apple is pushing user privacy), developers can rely upon virality once again.

“The interesting thing about CPI (cost per install) and things in ad tech design is that, as you scale, it has inverse economies of scale,” Lai said. “The more users you want to get, and the faster you want to get it, the more costly each install becomes. The complete opposite is true for virality.”

He added, “Now all you need is a URL that you could cut and paste, and for someone else, just to click on and play instantaneously. So app fatigue, you know, the stat that we solve for, is that something on the order of 70% of people that land on the App Store don’t actually end up activating or downloading the application because people just don’t want to download many more apps.”

But instant access takes us back to the “glory days of virality,” Lai said.

What does this mean? Developers won’t have to pay a 30% tax to Apple or Google for app store fees. And they won’t have to spend 40% of their revenues on user acquisition, and so a lot more of the money generated by their apps and games stays in the pockets of developers, Lai said. 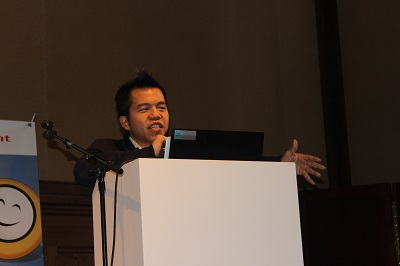 Albert Lai of Big Viking Games back in 2014.

If it were someone else telling me this, I would not believe it. But I remember hearing Lai talk about the problems of the app stores taking their 30% fees — long before Tim Sweeney of Epic Games began complaining about that, I believe — during a Casual Connect Europe event in Amsterdam in 2014.

Lai mentioned the challenges of working on the web with HTML5, which was still a fledgling technology. But over time, new technologies came along like WebGL and WebGL 2.0, enabling better graphics on ordinary web browsers.

The tech looked promising so Lai and his cofounder Connor Dickie, director of research and development, spun Parallelz out of their instant games company Big Viking Games.

“As you remember, Big Viking Games has always been a very strong proponent of the potential of using the web to deliver applications,” Lai said. “And we always joked about the fact that we would discover the fast way for us to burn money. And it’s called HTML5. And for the first five years of the Viking, we definitely worked really hard and invested heavily and maybe more than anyone else. And we ultimately managed to convince and helped launch the instant games platform with Facebook.”

But that platform still had significant problems because of Apple’s control over Facebook, and so Lai’s team continued to work on a new architecture.

“We went back to the drawing board for the last few years, and brought all the learnings together over the last 10 years to build something that achieves the Holy Grail. And the Holy Grail that we thought was impossible was and is a frictionless way to be able to take any game or app as native. And with no work, no SDK, for a developer to have their application instantly accessible through a URL with no compromise to quality without any restrictions from the App Store, and have it completely web native.”

The creation of new web standards like WebGL 2.0 helped a lot.

A ton of work ensued, and Lai credited his talented team for finding the path. And this isn’t a halfway solution, like games that play for a brief time for ads.

“I cannot believe after 10 years, we’ve actually managed to get this out the door,” Lai said. “We’re able to show you something that should not be possible.”

Lai thinks of this moment as fulfilling the original vision of Steve Jobs with the iPhone, where there was no app store and the Safari browser was supposed to provide the optimal connected experience.

“The web wasn’t that powerful enough and fast enough, and he ended up having to create the App Store and create this kind of backwards way of accessing and distributing and discovering applications, which is super inefficient now with the maturity of the web, and devices getting faster networks getting faster web standards like web assembly and WebGL.”

In a demo, Lai showed off a completely native version of Cookie Jam, a simple mobile game from Jam City. The demo was completely web native, Lai said, and it was “pixel perfect.” The demo showed that the 3D graphics of the game worked fine. It was built in Unity, but an Unreal game would work as well, Lai said.

“There is zero friction for the developer to do this,” he said. “I can play high twitch games on it because it’s super low latency.” Lai said.

He added, “We can actually do things like start and stop a game at arbitrary states. So basically we could deep link into applications. And what I mean by deep linking integrations is that we can start and stop with what we call an end card. And we have a store card, which could be that we could start an app at any point in time. So we could deep link into level 62, for example, or some other level that you prefer a user to have access to as the immediate experience.” 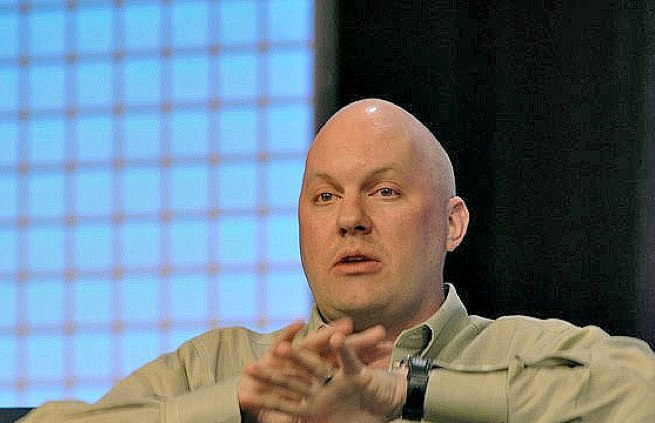 Lai compared the solution to the time decades ago when Marc Andreessen created the Mosaic web browser, helping to unlock the internet for ordinary consumers who didn’t want to navigate by typing long rows of text or numbers to get to a site.

“The browser didn’t replace windows,” Lai said. “It just created a new layer on the internet and a new layer for you to use your computer that that manifested itself over time to have more and more capabilities and functionality.”

Like the original Mosaic web browser, Parallelz believes it will irreversibly change the power dynamics and efficiency of the industry.

Lai added, “We have created and opened a box that will have an irreversible impact on the future of the mobile internet.” Galatron is an HMTL5 space shooter from Big Viking Games, circa 2016.

Lai managed to raise $3 million from a bunch of people he has known in the industry for years.

“The round came together way faster than I thought it would and it was oversubscribed,” Lai said. “And quite frankly, over six companies, I’ve never been able to raise money this quickly.”

“When I heard about Parallelz, I didn’t believe it was possible until I saw it. Parallelz enables new and radically powerful opportunities to drive virality and growth – that is a game changer,” said investor Ed Baker, founder and CEO of AnyQuestion, in a statement.

“Parallelz has achieved what many developers thought was impossible. Soon, sharing a mobile app will be as easy as sending a link,” said investor Ryan Hoover, founder of Product Hunt and investor at Weekend Fund, in a statement.

Parallelz was founded by experienced mobile gaming and software leaders including serial entrepreneurs and technologists from Google, Mozilla, MIT Media Lab, Bridgewater Associates and other top technology companies. The company plans to make its platform available in limited release later this year.

Investor Andre Charoo, general partner at Maple VC, which led the pre-seed funding round, said in a statement that the combination of “app fatigue, rising user acquisition costs, the 30% tax, and a single point of failure” has made mobile apps “an increasingly more difficult and inefficient channel” for marketers and brands. “Parallelz has invented a next-gen computing architecture that revolutionizes the delivery, discovery and distribution of mobile apps.”

According to Alexander McIsaac, partner at Global Founders Capital: “Forcing users to download and install apps has unnecessarily created friction. Parallelz removes the friction in and replaces it with a method that is easy for users and developers alike.”

Lai said his company supports WebGL and intends on supporting any new open standards as the technology gets better over time. The company sees itself as building a parallel universe to the app stores, and that’s why it calls itself Parallelz.