Photoshop Troll Who Takes Photo Requests Too Literally Strikes Again, And The Result Is Hilarious (17 Pics)

There are few photo editors on the internet who have made as big of a splash with their witty antics as British graphic designer James Fridman, Photoshop troll and wizard extraordinaire. Odds are that you’ve scrolled past one of his hilarious photo edits on social media without realizing that it’s him working his magic behind the screen.

James has become notorious for taking photo editing requests far, far too literally. Remember that episode from ‘The Simpsons’ where the family find and use a monkey’s paw to grant wishes, but they’ve all got twists to them? Well, that’s exactly what it’s like asking James for help! He takes requests very literally and it leads to all kinds of shenanigans. Of course, it’s all done with a smile and for the sake of some great humor (hey, laughter’s really good for lowering your stress levels).

Check out James’ finest recent photo edits below and upvote your fave ones, Pandas. And if you’re still hungry for some more literal comedy, check out Bored Panda’s other recent posts about the grandmaster troll himself right here, here, and here. Happy scrolling (and trolling)!

Just remember, if you’re a fan of James’s work, you should really keep in mind that you shouldn’t send him any photos that you wouldn’t want him to make public. There’s no putting the genie back into the bottle after you press the ‘send’ button. 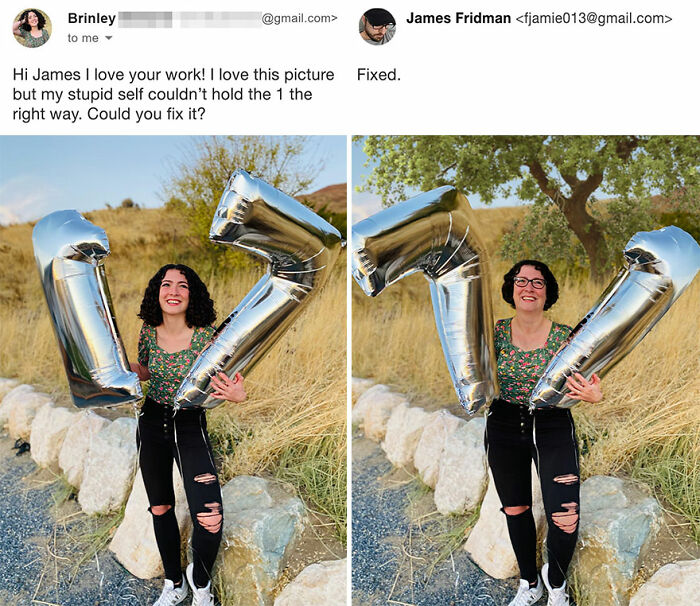 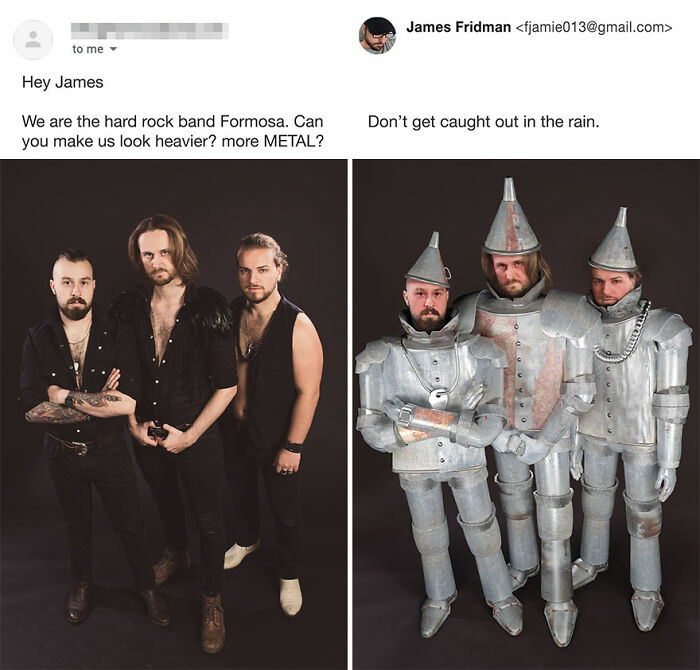 Photoshop troll James’ following keeps on blossoming and there’s no end in sight. If his fan number were a stock, you’d definitely want to invest. He has 1.6 million followers on Facebook, 2.2 million fans on Instagram, and 1.9 million adoring internet users following him on Twitter.

It’s no surprise that his photo edits took off. They’re witty, he engages with the public, and it’s a lot of fun trying to guess what edits James is going to do, based on the photo request.

This autumn, James has put together his debut book, ‘Joy of Photoshop,’ containing his most popular photo alternations and some edits that nobody’s seen before. It’s worth a peek if you’re a fan of his. 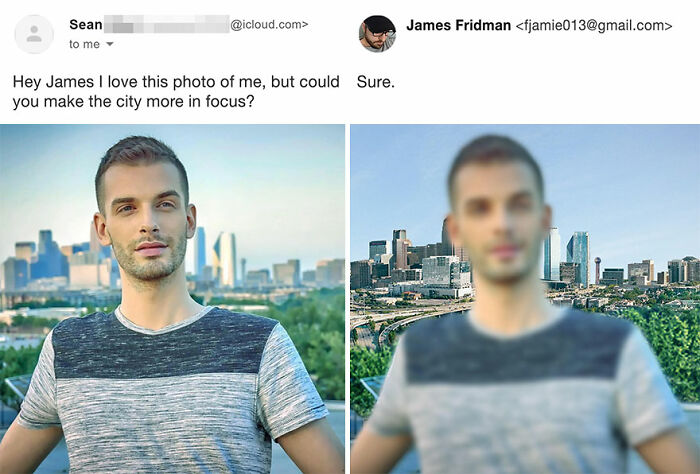 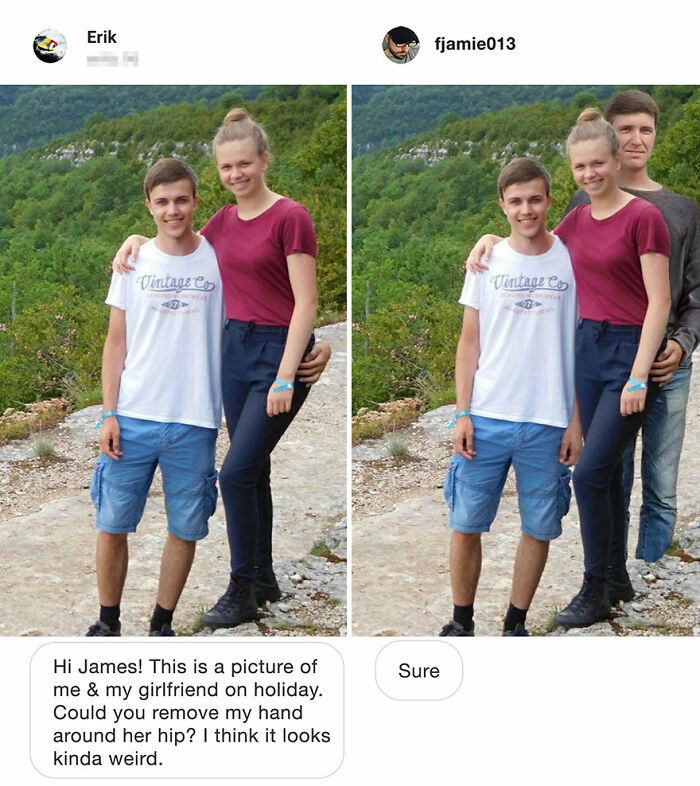 Some time ago, I spoke with professional photographer Anna Chii about her philosophy of photoshopping pictures. “Often when people hear the word ‘Photoshop,’ they imagine Instagram girls which make their faces unrecognizable by ‘photoshopping’ them and think that Photoshop is used just for that. Actually, people mistake it with other apps like ‘Facetune.’ Photoshop is a software package for working with digital imagery and is used not only for photography but also for design, video editing, photo manipulations, and more,” Anna told Bored Panda in an exclusive and in-depth interview.

“When we talk about photography, there is no single proven way of using this software when it comes to editing pictures. Every single photographer or retoucher has his or her own style, way of editing, or set of skills used for making the best photos possible. That’s why photoshopped pictures can look wildly differently: from waxy or plastic faces to an absolutely natural look. From drastic changes in face or body features to just color corrections. From creating a fantasy world around your subject to simply removing unwanted objects from the background,” the photographer explained. 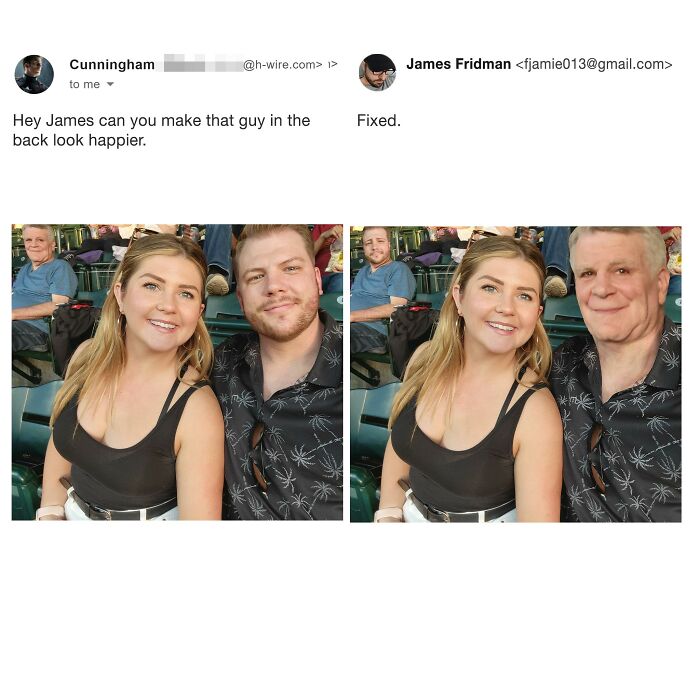 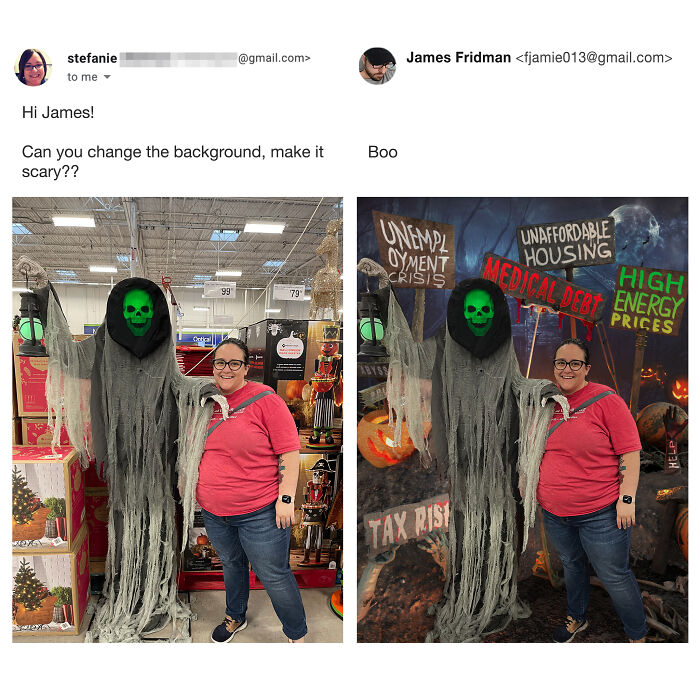 “From personal experience, after many years of learning and experimenting, shooting takes the least amount of time in comparison to the other parts of the process — planning and retouching,” Anna revealed. “I mostly take portraits. Usually, my clients are not professional models with heavy makeup, which covers all of their imperfections and barely requires any retouching. My models are people who want to have lovely pictures of themselves, who want to portray their lives and experience fun time while freezing those moments – without pressure or fear of being imperfect.”

Photographer Anna opened up about how she retouches every single picture. “I do believe that my clients need to get the best result they can get. And making a regular picture great requires not only taking pictures correctly from a technical point of view but also adding some magic to each and every one of them,” she said that going the extra mile is worth it. 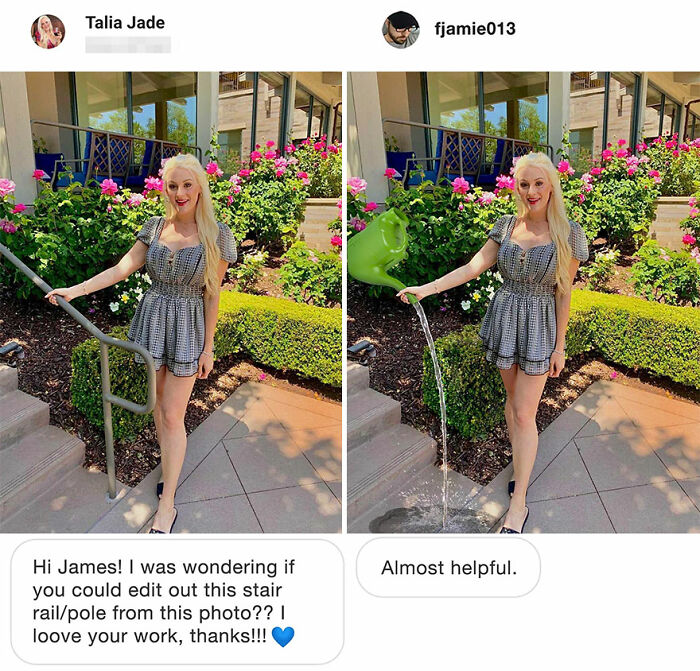 “And it’s not about changing features, or making people look perfect and not representative of the way they look in real life. It’s about the small details, which make the photo stand out without making it look unrealistic. It’s about colors and lighting. About mood. Every person that I shoot has their own story and a unique aura. I want to make my pictures reflect the feeling I get when being with the person and share it throughout the final image. And it can take from half an hour to a couple of hours per image. Depends on the emotion I want to portray in the final picture,” she said. 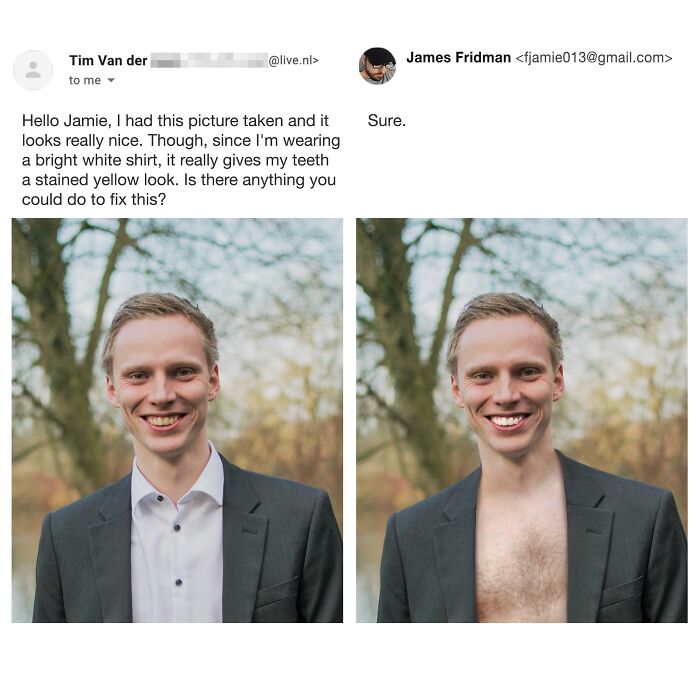 “For me, Photoshop is not about changing the person in the picture, but about enhancing the quality of the picture. Correcting shadows and lighting, enhancing colors, correcting small details like wrinkles on clothes or makeup makes a huge difference. It can be done with the help of professionals—makeup artists, assistants, stylists. Before and during the shoot they will correct makeup, clothes, hair, hold a reflector for better light. And it can also be done during post-production in Photoshop. Almost the same result, simply a different way of achieving it. Producing a quality photograph requires time and effort. So Photoshop is not an easy way to get beautiful pictures with just a few clicks of a mouse,” Anna pointed out that photo editing isn’t as easy as some might think. 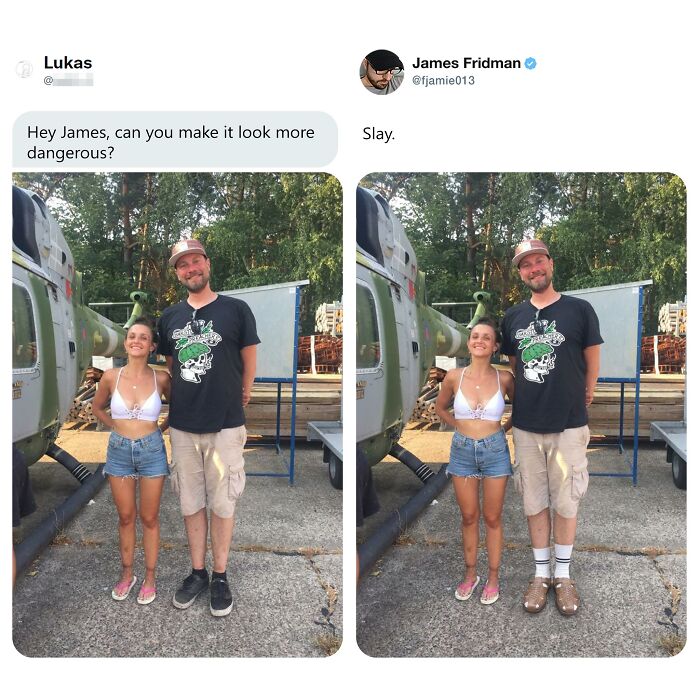 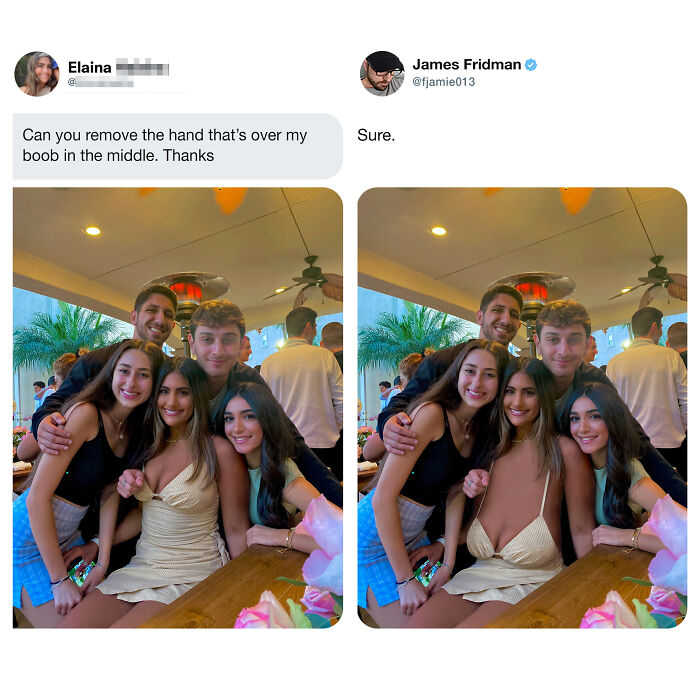 “If you like pictures without Photoshop and want to have a photo shoot for yourself—that’s great. Find a photographer that takes “natural pictures” and hire her/him. And yet, I don’t believe that, if they are professionals, they will give you a photo without any (at least slight) retouching. Maybe the picture will look natural, but will it really be, is a different question (unless all a photographer cares about is to get the money and get rid of the client as fast as possible).” 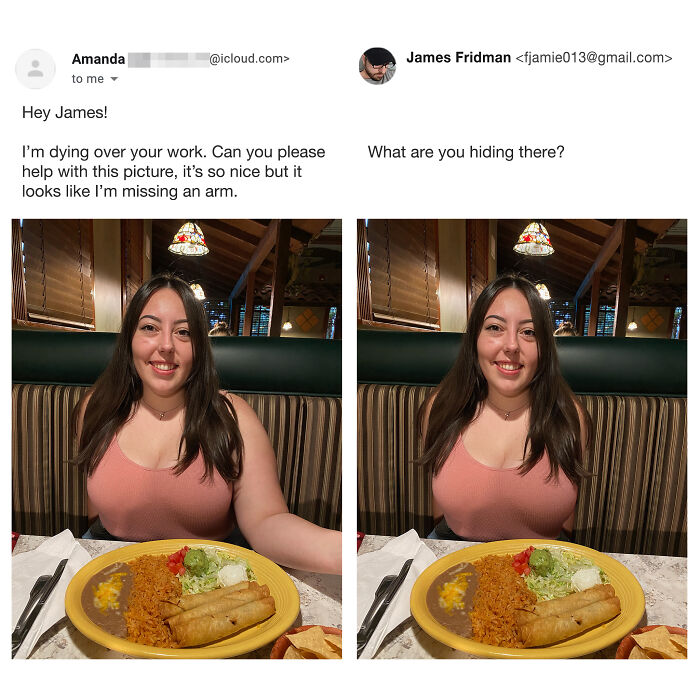 Anna explained that photographers should be willing to constantly develop their skills and learn new techniques, including how to edit photos better. “As time passes in your photography journey, you want to take better pictures and improve the quality of your work. And for that, you need to learn new techniques. And get new skills. Including Photoshop. I think, if a photographer has good Photoshop skills, it’s only a plus,” she told Bored Panda. 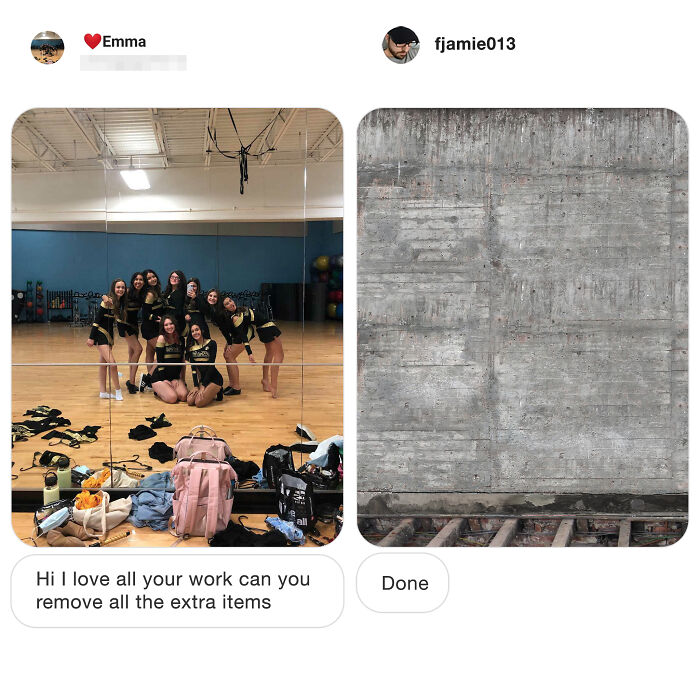 “But you can’t produce good photographs if you can’t take good photographs. Photoshop won’t help you create a good picture out of a terrible shot. If you don’t know how to use Photoshop, probably it will end up being the opposite. You can make a picture even worse than it was before. But if the photograph itself is good, then Photoshop can enhance it and make it a little bit better in a different way—depends on the goal,” she explained that Photoshop isn’t a cure-all. The photos themselves have to be good. 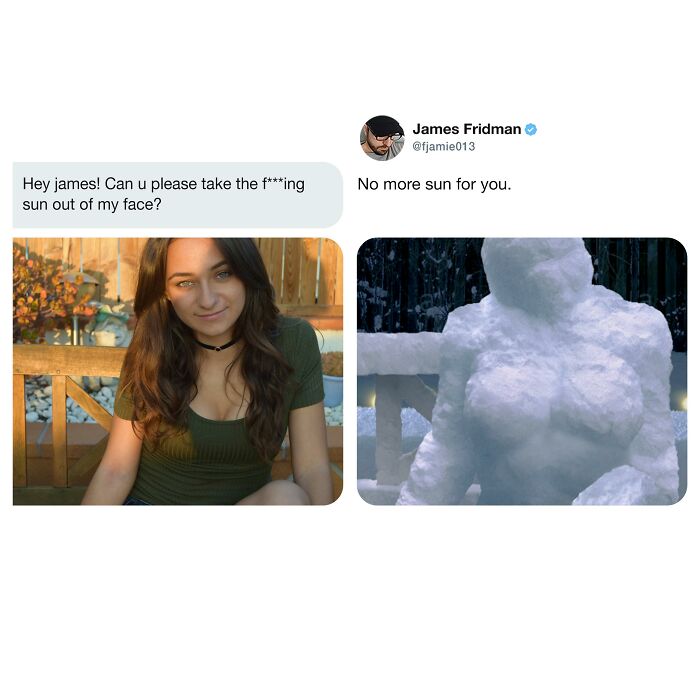 10 People In This Group Are Sharing 107 Seriously Confusing...