EXCLUSIVE: Keith Adams, the Deaf coach who made history leading an all-Deaf high school football team on 12 consecutive victories against all hearing teams, has inspired two major projects: a feature film and a documentary with the Project Power directors behind the feature film. Henry Joost and Ariel Schulman have signed on to direct the film with screenwriter Josh Feldman currently writing the screenplay. That film is based on the life of Coach Keith Adams, and his sons, Kaden and Trevin, quarterback and team co-captain.

“This film will be groundbreaking for many reasons including representation and disability visibility both behind and in front of the camera. As someone who graduated from a state school for the Deaf, I am honored to introduce the world to a compelling family, both on and off the field, with Coach Keith Adams as its beating heart,” Feldman said. 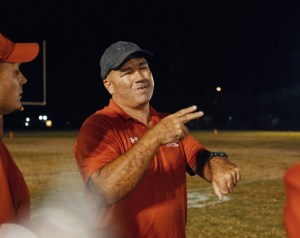 Separately, the NFL has commenced production on a documentary on Coach Adams, his sons and the Cubs’ historic season. The piece is being spearheaded by NFL360 – the critically acclaimed documentary production arm of the NFL, which received 4 wins and 12 nominations at the 2021 Emmys. Freddy Wexler and Trent Cooper are directing. This year, the NFL invited four Deaf football players to participate in the Superbowl coin toss; among them was Trevin Adams, Coach Keith’s son, and a key part of the upcoming documentary.

“NFL360 is excited to combine storytelling forces with Freddy Wexler in this once-in a-lifetime sports project that honors not only the players but also their fearless leader: Coach Keith Adams,” said Dallas Hitchcock, NFL 360 co-creator.

Wexler, who acquired the life rights of Coach Keith and his sons in a bidding war last December, will also produce the feature film alongside DJ Kurs, the Tony-nominated and Deaf artistic director of Deaf West Theater, as well as Eryn Brown of Entertainment 360. Wexler is also producing the documentary with the NFL.

As for the film, the creative team is committed to launching a Deaf actor in the leading role, as part of a commitment to discover and champion more Deaf talent in Hollywood.

Since the film’s initial announcement, Coach Adams, his sons, and their teammates have continued to make headlines. Last month, California Governor Gavin Newsom committed $43 Million to the California School for the Deaf, Riverside, home of the Cubs, for athletic improvements.

As for Joost and Schulman, besides Project Power, the duo is best known for their breakout film Catfish. The two recently wrapped production on the Paramount pic Secret Headquarters starring Owen Wilson.

Feldman is an LGBTQ+, Deaf writer & creator who is currently a Co-Producer for the new Marvel series, Grasshopper aka Echo. He previously co-wrote, co-directed, and starred in the Sundance Now series, This Close the first major U.S. series to be created and written by Deaf people.

Disney Hoping To Lure Johnny Depp Back To...