ABC’s Promised Land and Disney+’s The Mysterious Benedict Society are going to California. The two series have scored increased funding for relocating as part of the Golden State’s film and TV tax credits program.

The California Film Commission said Monday that Touchstone TV’s Promised Land will receive $8.66 million for moving from Georgia, and 20th Century Studios’ Mysterious Benedict Society will get $6.34 million to come south from Vancouver.

“The producers of Promised Land are thrilled to be bringing our show home to California,” said executive producer/showrunner Matt Lopez. “For over a hundred years, the Golden State has been the ‘promised land’ for content creators in the film and television industries. It is an honor and a privilege to tell this quintessentially American story right here in California, home to the most diverse and talented crews in the world.”

Written by Matt Lopez and directed by Michael Cuesta, Promised Land is an epic, generation-spanning drama about two Latinx families vying for wealth and power in California’s Sonoma Valley. It stars John Ortiz and Christina Ocho and was ordered to series by ABC in August.

Based on the bestselling YA book series by Trenton Lee Stewart, The Mysterious Benedict Society premiered in June and renewed last month. Season 2 will pick up as the team of four intrepid orphans reunite a year after their first mission, when they were assembled by Mr. Benedict (Tony Hale) and his cohorts to foil the nefarious “Emergency” created by Benedict’s twin brother Dr. L.D. Curtain (also Hale).

The expansion of California’s Film & TV Tax Credit Program was signed into law by Gov. Gavin Newsom on July 21. It has several key provisions including an additional $15 million per year (for two years) increase in tax credits reserved specifically for relocating TV series, bringing total annual funding for relocating series to $71.1 million (up from $56.1 million). In addition, the criteria to qualify as a relocating TV series has been relaxed to include series that filmed their pilot episode out-of-state, after required relocating series to film an entire season outside California.

Here are two charts from the California Film Commission that show which series have relocated to the state and ongoing series that have qualified for the credits: 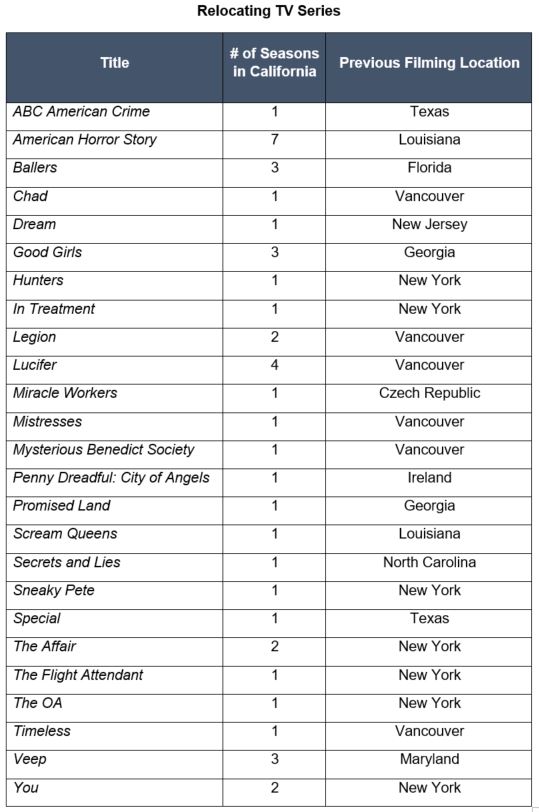 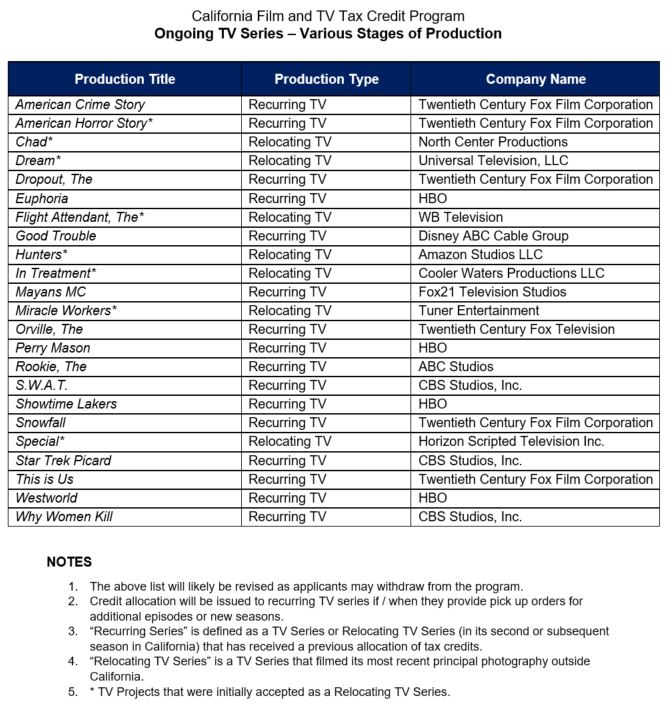