Randy Pitchford: Games as a hobby trumps games a service

Join gaming leaders, alongside GamesBeat and Facebook Gaming, for their 2nd Annual GamesBeat & Facebook Gaming Summit | GamesBeat: Into the Metaverse 2 this upcoming January 25-27, 2022. Learn more about the event.

Randy Pitchford started Gearbox back in 1999, and since that time, the company’s games such as the Borderlands series have sold more than 100 million copies. And Pitchford has come to believe that games as a hobby trumps games as a service, and he warned against putting something other than gamer’s interests first.

In a fireside chat with me at our second annual GamesBeat and Facebook Gaming Summit, Pitchford said that focusing on making fun matters more than anything else.

“I do believe that a huge component is the fundamental philosophy by which myself and the talented Gearbox team approaches what we do,” Pitchford said. “We think about our games as potential hobbies, as places where you want people to spend time and enjoy the time that they’re spending there. There’s obviously a business in this because it takes resources to make something with teams. But it’s always our ambition that the audience feels like they have the better end of the bargain.”

He added, “We want the relationship between us and the people that play our games to be the kind of relationship that entertainers have with their audiences, which is a contrast, to the kind of relationship that a tobacco company has with an addict. And we’ve seen business models in this industry [where] there can be some addictive qualities to interact with a very powerful medium. But we tend to always approach things from the customer perspective. And because we’re customers. I’ve literally spent my entire holiday just playing video games.”

The 2nd Annual GamesBeat and Facebook Gaming Summit and GamesBeat: Into the Metaverse 2

Pitchford said the team talked about how games should be hobbies at Gearbox as early as 1999. It was interesting to him to see the game industry coin the phrase in the 2000s about creating games as a service, where an online game could be continuously updated and monetized long after its launch, on an almost permanent basis.

“To me, that label betrayed a fundamental orientation. Games as a service kind of betrays a motivation to get people to be locked into a recurring monetization scheme of some kind. It’s fundamentally business driven. It’s a suit driven mentality,” he said. “[With games as a hobby], you can feel the orientation, right? It’s about that hope to have engagement service something more than just a transaction. It creates joy and happiness and surprise and delight and gratification from whether it’s its growth or mastery over time, or familiarity or comfort, or those emotional things that we feel when we experience stories, and spend time with characters that actually tell us something about ourselves.”

Heart of an entertainer 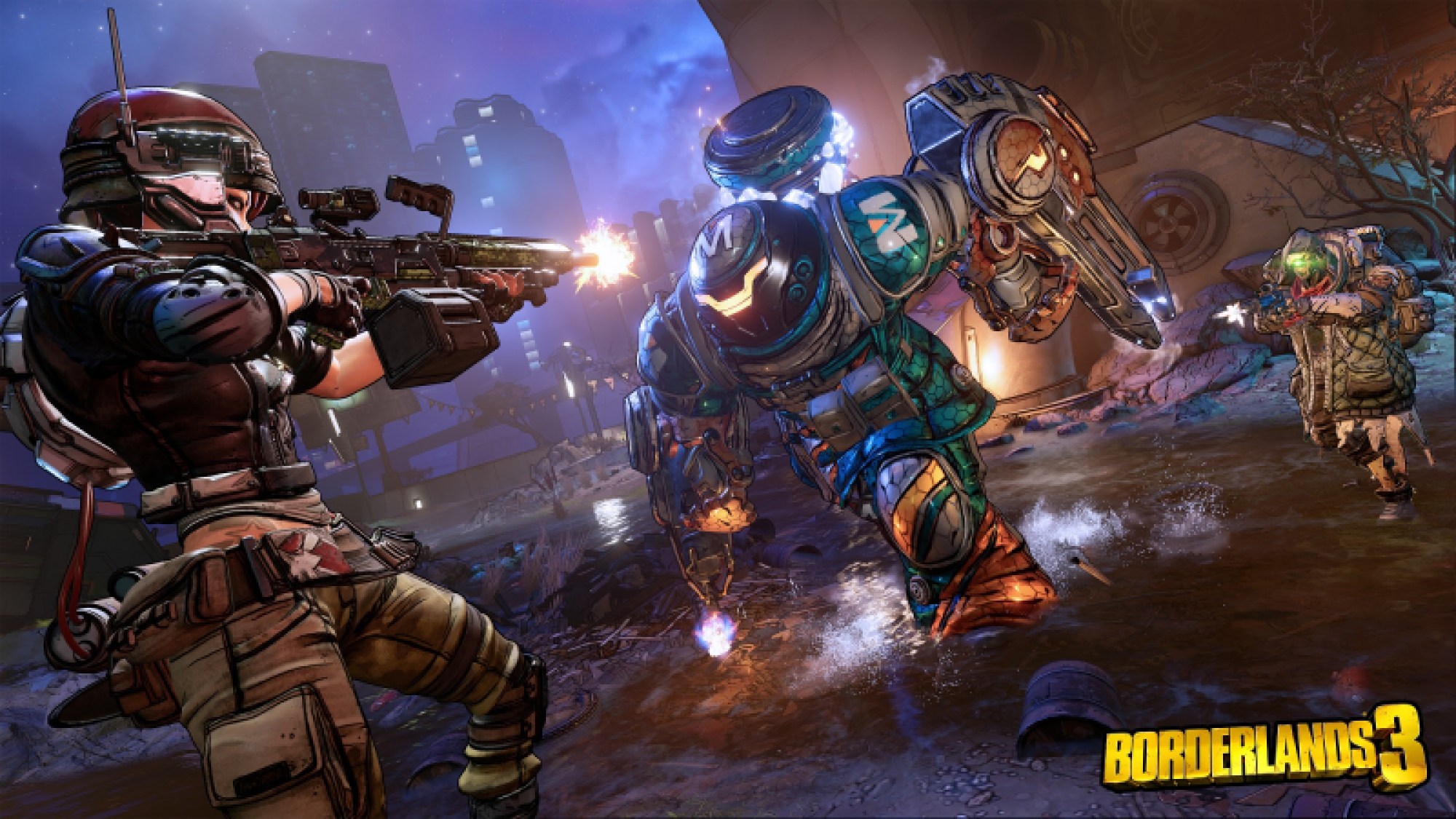 Borderlands 3 takes the action off Pandora, a series-first for Gearbox.

Pitchford said he has the heart of an entertainer, as before he was a game developer he was a magician. He paid his way through college performing at the Magic Castle and at Hollywood bars and nightclubs and restaurants and private private gigs.

“I learned everything I know about entertainment from from that era. In my life. I’ve obviously picked up a lot of things since then. But the foundation was set there,” he said.

Last year, the company that Pitchford built was acquired by the Embracer Group for up to $1.2 billion. It’s been about a year, and Pitchford said that all is well. He noted that Embracer Group is a holding company with a decentralized model that empowers entrepreneurs and and value creators with access to capital and the ability to participate in a publicly traded market without having to deal with any of the complexities.

“Our mission is to entertain the world, to create joy and happiness,” he said. “So Embracer has been an outstanding partner. We’re totally autonomous but we have the opportunity to interact with other Embracer Group members and and create unforced synergies where we all see fit.”

In the past, Pitchford said that “traditional blueblood publishers” always “had their eyeballs on Gearbox and they tended to to estimate us by the past work that we’ve done, instead of imagining us as a creative engine that has a lot to do.”

So Pitchford felt that the company’s intellectual property and its potential were under-utilized, as it depended on publishers to reach the market and finance its games and get it on the right platforms. 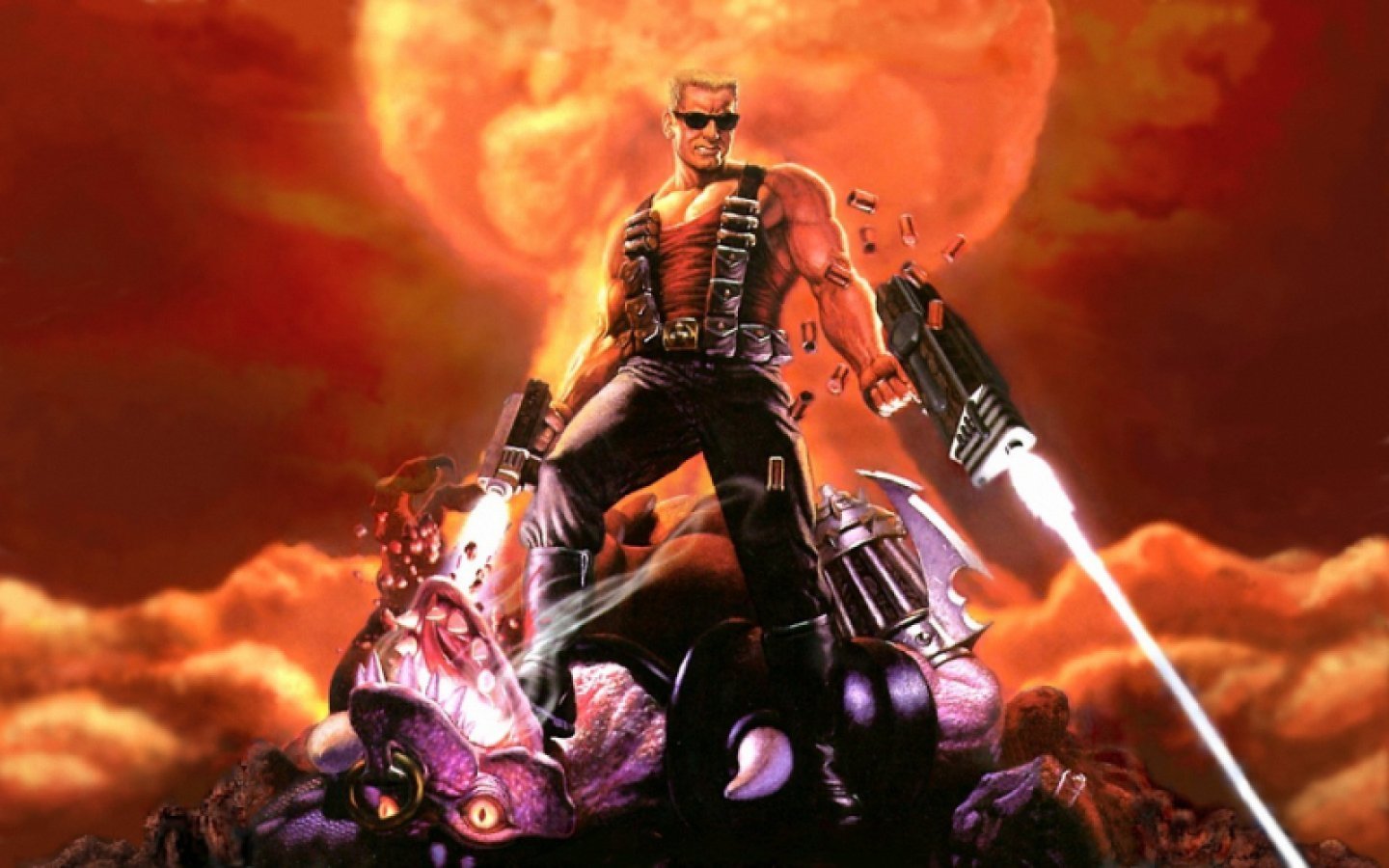 But now Gearbox is a publisher.

“We’ve discovered and proven we can scale our creative engine,” he said. “We grew a studio from scratch.”

He said the company’s values, principles, methods can be translated to new locations, territories, countries, and sub-studios. The limiting factor in the past was access to capital, and now the company has that.

Asked how the company gets loyal followers (like Borderlands cosplayers) who follow a game long after it’s launch, Pitchford said, “It’s astonishing to me when I see our fans manifest things from our video games into the real world. And when you do a Google Image Search for Borderlands cosplay, you are treated with just phenomenal content. It’s very clear that passionate people spent huge amounts of their own time and resources to try to bring these fantasies to the real world. And then, if you want to go down a deeper, darker rabbit hole, you can Google ‘Borderlands tattoo.’ When I was scribbling the Borderlands logo, using a whiteboard marker to doodle possibilities, I had no idea that people would be permanently affecting their bodies by tattooing this thing on themselves.”

He said there is no formula. And that was thinking of games as hobbies. 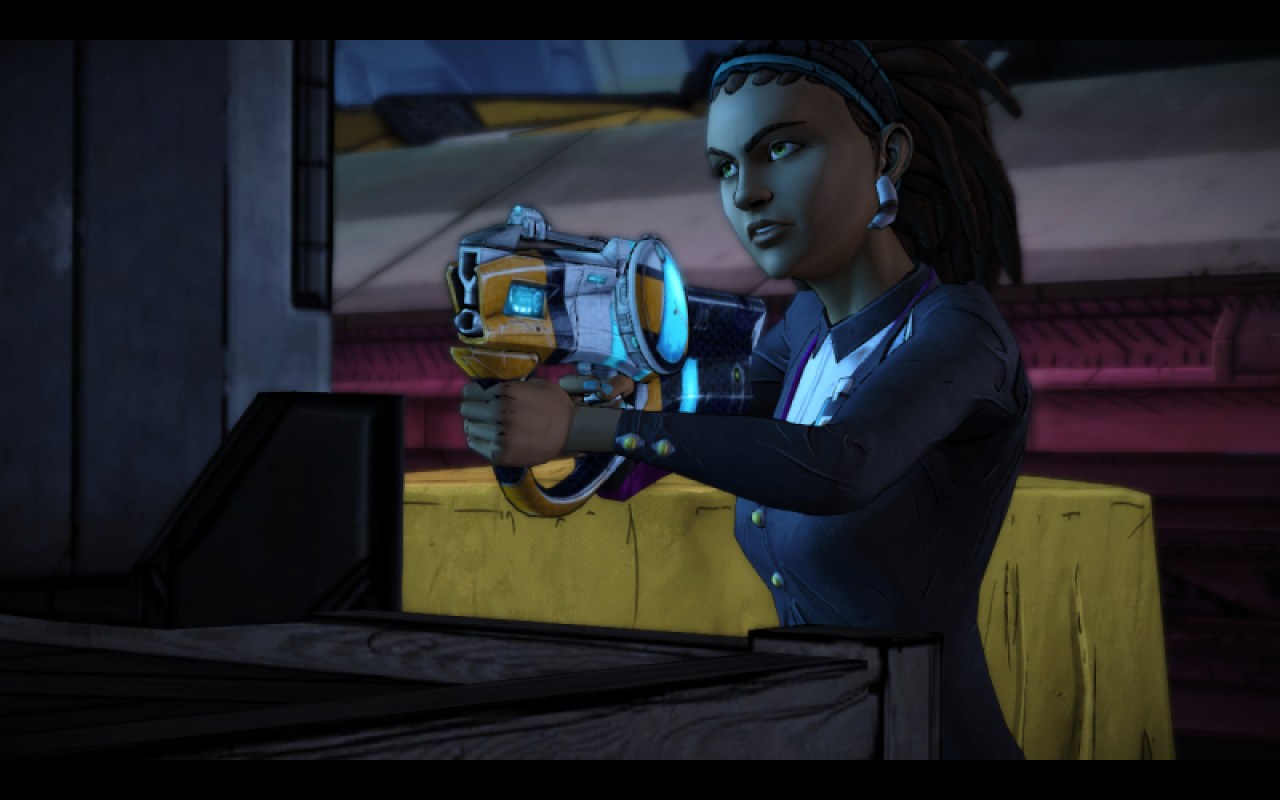 Tales From the Borderlands.

“We’re not always perfect at it, but we try we like to get into the real shit,” he said.

I asked Pitchford why Borderlands 3 was so successful. It got a leg up from the Epic Games Store giving it away for free as a starter, but it was successful beyond that.

“It was terrifying to live up to this thing that we’ve created,” he said.

He noted how the company made Half-Life: Opposing Force for Valve’s Half-Life franchise and it was intimidating to follow up on a huge hit. Gearbox had a team of just 10 people at the time of the pitch. When it came out, it got a nomination for a top award with the Academy of Interactive Art & Sciences. And it won. He said the feeling of taking risks and walking on a high wire without a net is so intimidating.

“As entertainers, we have no choice,” he said. “We have to get on the horse again and find it again. “

The company had a tough time with Battleborn, an online game that resembled Overwatch. It came out before Overwatch, and it managed to reach three million players. But they didn’t stick with it, and they did play Overwatch instead. That was a tough result. The same feeling of anxiousness preceded the launch of Borderlands, which didn’t have high confidence among publishers.

But Borderlands held the attention of players and it has gone on to new heights.

“Before Borderlands there were no health bars above enemy’s heads. There were no stats on weapons. There was no growth and leveling up the player characters in a first-person action game,” he said. “This was a moment to moment game. We had leveling up and finding loot. And I didn’t know how much of its success was because of the universe we’ve created with the characters we created or how much was because of the game loop.” 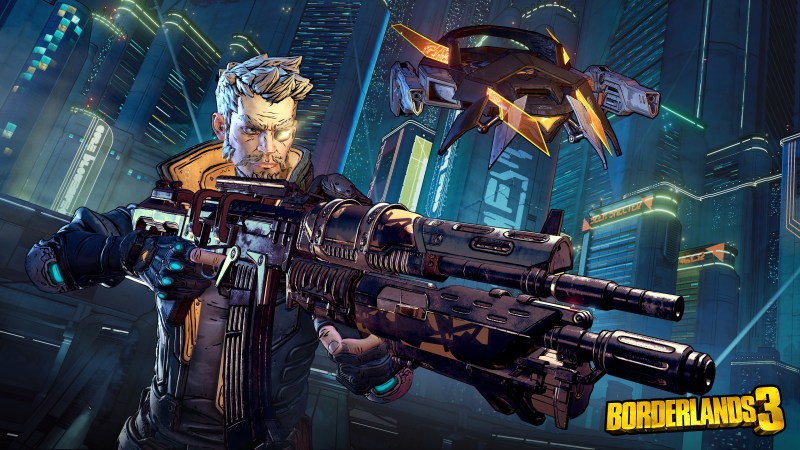 When Telltale launched a non-combat version of Borderlands with its Tales from the Borderlands narrative game, it was all about a story. And when it came out and was successful, Pitchford realized that it could be a valuable transmedia franchise. Until that time, he was never sure if it was the gameplay that made Borderlands so popular.

“They made an interactive fiction game in the Borderlands universe with our characters and our themes, and our storyline and our direction and our style. And it was extremely successful as the highest rated game in the entire Telltale [history],” Pitchford said. “And it’s a great game, and it has no shooting, and it has no looting, and has no leveling up, and has none of those things that were engaging and addicting about the Borderlands game design. It just has character story and interactive fiction. And it worked. And that gave me a huge amount of confidence in this belief that there’s value to this medium and our mission.”

And so now Gearbox Entertainment is greenlighting films based on Gearbox properties, including a movie based on Borderlands.

“Entertainment can take many forms. And as much as interactive is engaging, it does ask something of the audience,” he said. “That audience does have to move their fingers and make decisions. And there are some people that really just love movies or television, or maybe they like fiction, and we want to entertain them too. And we know that we’ve reached people that have spent thousands of hours in the Borderlands.”

He added, “We’d love to share the universe with their friends and family that don’t necessarily play video games. And I think a Borderlands motion picture would be a great tool for that. And so expanding that universe is also in line with that thesis about games as a hobby. And it’s not just games. It’s entertainment as a hobby. It’s universes and storylines and characters and gameplay, where it makes sense. All can be part of this hobby.”

Pitchford said he was working in Budapest shooting much of the movie in 2021, as the executive producer. I think it’s about time that transmedia meant that games could be turned into movies, rather than the other way around. And there is a next step to that as well, Pitchford said.

He said that the creative process could become the creation of all of the entertainment for the different media simultanously.

“This kind of integrated entertainment, planning and design and creative process, integrating creative process across these different media is going to be necessary,” he said. “We are going to live the dream of the metaverse. We’re going to make all the mistakes and hopefully we’ll learn some things and other people can learn to. And together we can have some really awesome new IP. I think the universe’s IP franchises of the future don’t even exist today. And we’re going to be creating and I hope the people watching this are critical to look forward to that.”

Meta’s Rick Kelley on what to expect for...