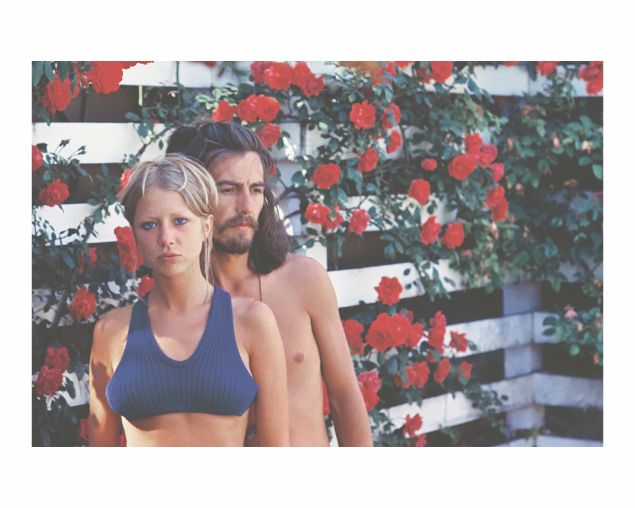 A Pattie Boyd self portrait with George Harrison in their rose garden, 1968 Pattie Boyd Archive

Pattie Boyd is undeniably one of rock and roll’s most iconic muses. Having inspired songs like George Harrison’s “Something” and Eric Clapton’s “Layla” and “Wonderful Tonight,” she found herself at the center of a love triangle that would go down in music history (Boyd married Harrison in 1966 and later, Clapton in 1979). But as a trendsetting model of the ’60s turned photographer, Boyd’s career is certainly worthy of its own spotlight. And that’s exactly what My Life In Pictures, her new book, sets out to do — even though Boyd, now 78, was a bit hesitant in the beginning. “I thought initially that it was going to be photographs that I had taken,” she says while sipping a green juice in her London flat, her dog Freddie close by. “But then they wanted photographs of me, and I thought, ‘Oh my God, really?’ I’m a bit shy about it.” The end result tells the story of Boyd’s life through a mix of professional modeling shots and personal letters and diary entries (plus a few photos taken by Boyd, of course), all woven into a gorgeous coffee table book.

Growing up in Kenya and England, Boyd didn’t initially have ambitions to become a model, but as a teenager, she seemed to crave adventure. “I left home at about 17,” she recalls. “I was just so determined to get out of this environment where my mother and my stepfather were splitting up and I had five brothers and sisters who, whatever I did, would all follow me. I thought, ‘I must get out, I must try and be independent.’ So I got a job and shared a flat with about five other girls,” Boyd shares of moving to London in the early ’60s.


First working at an Elizabeth Arden counter, Boyd’s big break came when a client recommended her to a modeling agency. “My agent would phone me last thing in the afternoon and tell me my jobs for the next day, and my diaries would be quite full. But not to begin with,” she adds. “I had to work hard, going around to photographers’ studios and showing them my portfolio,” Boyd says of how she began landing jobs with leading fashion photographers of the time David Bailey, Terence Donovan, and Brian Duffy. As Boyd added fashion spreads for magazines like Vanity Fair and Vogue to her resume, she also helped to popularize beauty trends of the time, including curtain bangs and cut crease eyeshadow — looks that Boyd recalls she often came up with herself. “If I had a job, I had a big, tall bag — no wheels in those days — with dark shoes, light-colored shoes, all sorts of jewelry, wigs, and hairpieces,” she says of lugging everything she’d need for the day along with her. “Once I was in Paris doing a session for David Bailey, and it was all yellow clothes, so I thought, ‘I’ll have yellow just under my eyebrow along the bone here,'” Boyd says, adding that she and the other models often had to get creative using things like paint when bolder makeup colors didn’t exist.

With her career firmly established, the breaks just kept getting bigger. “I remember I was at a job being photographed, and my agent phoned and she said, ‘Oh, Pattie, if you have your portfolio, can you go to this address in Soho in London for an interview?'” Boyd recalls of how she was unknowingly cast in the 1964 Beatles film, A Hard Day’s Night. “She didn’t say what it was for, so I went along, and the usual big amount of girls were waiting with their portfolios,” she describes. “When my name was called, I recognized one of the people looking at my portfolio because I’d done a TV commercial with him, and I thought, ‘Oh, yes, it’s a TV commercial, what fun,'” Boyd continues. “When I got to my flat, my agent phoned up and said, ‘Pattie, you’ve just got a part in the Beatles film, don’t tell anyone.’ Well, this is so exciting, how can I not tell anyone?” she remembers gleefully. “I told my boyfriend, who was a photographer, and he said, ‘I bet you fall for Paul McCartney,'” Boyd says through laughter, those famous blue eyes twinkling with mischief. It was Harrison, of course, who Boyd would fall for. And in 1966, the pair was married in a private ceremony at a local registry office where they lived in Surrey, England — McCartney serving as best man.

The photos perfectly encapsulate the style of the time — custom fur coats, and for Boyd, cut crease eyeshadow and a volumized half-up blowout, styled with a bow and side-swept fringe. “I did my own hair and makeup,” Boyd says of her wedding day, which was kept secret from the press. “The Beatles’ manager Brian had this thing in his head that he didn’t want the Beatles’ fans to know when they were getting married,” she shares. “I couldn’t tell anyone, so I just went to a department store and got a dress,” Boyd says, noting that she chose red instead of white so as not to draw suspicion. The only person who knew about the wedding (apart from family), was the famed British fashion designer Mary Quant, who made Boyd and Harrison their coats. “Mine was a red fox coat, which wouldn’t go down well today, would it?” Boyd recalls. “And George was wearing a black Mongolian lamb; they looked so great together.”


From there, Boyd’s life got even busier: there were Vogue covers, world travels (perhaps most notably to India where Boyd and the Beatles studied Transcendental Meditation with the Maharishi himself), divorce, and marriage to Clapton — once again, Boyd did her own styling. “This was almost even worse,” Boyd says with a laugh when asked if she had more time to plan for her second wedding. “I was in LA staying with my sister when he phoned and said, ‘Oh, let’s get married,'” she shares. “We’d never discussed marriage before and suddenly, ‘Let’s get married in Arizona, this will be lovely.’ And I said, ‘Why Arizona?’ And Eric said, ‘Well because my tour starts in Arizona.’ How convenient for him,” says Boyd through laughter. “So I went shopping in LA, and I found this lovely silk dress, and I flew with my girlfriends to Arizona.”


All the while, Boyd was honing her skills as a photographer, having saved up money for her first camera at the start of her career. “When I was modeling, I thought, ‘This is a splendid opportunity to take advantage of the situation,'” she says of how she got her start. “Whoever I was working with, I’d ask them for tips on how to take photographs,” adds Boyd, whose early subjects included the Beatles, Clapton, and friends like Mick Jagger, Jerry Hall, and Ronnie Wood.

Yet the photo Boyd is most proud of in the book doesn’t involve any of these famous figures. “I went to see a photographer who I really liked to give me some lessons,” Boyd says, noting that she had driven to Cornwall for the meeting. “It’s beautiful there, with lovely beaches, and as he was photographing this couple for a calendar in front of the waves, his girlfriend said to me, ‘Would you like to photograph me?’ So I’m putting film into my Hasselblad — which takes time to wind it on — and I turn around and she had taken all of her clothes off. Well, you should have seen the faces of the people on the beach,” Boyd says with a laugh. “They couldn’t believe their luck. I said, ‘Sweetie, go and sit on that rock over there, put your head forward, and then whoosh it back,'” she explains. The last photo on Boyd’s negatives — a black and white image of the girl sitting on a rock with her hair tossed back just as a wave had crashed in the background — is the one in her book. “That was the magic of photography then,” Boyd says. “You never really knew what you had until you process it.”


When asked for a favorite photo of herself, Boyd flips past her modeling work to a close-up shot taken outside on a snowy day. “This is one that George took of me at home where we lived in Henley,” she says smiling. “I was taking photographs of George in the snow, and then he took this of me. For some reason, I put on this dark wig, and it makes my eyes look really blue, which is maybe why I like it.”


Today, Boyd and her husband, property developer Rod Weston, split their time between London and their home in the countryside. And Boyd still enjoys working as a photographer. For more than a decade, she’s hosted photography exhibitions around the world, though she’s barely scratched the surface of displaying her archive. “There are all these photographs that haven’t been seen — even in this book,” Boyd says full of excitement over the possibility of sharing them in the future. But she says she’s learned not to rush things. “I wish I had realized that there’s so much more time,” she shares of the advice she would give her younger self. “There’s a time for everything; and if you’re stressed and you’re thinking about tomorrow, then you’re dismissing today — and it’s a beautiful day.”