‘Tis the season.  Well almost. And perhaps that is why AMC+ and RLJE recently swooped in and took the new holiday-themed dramedy Silent Night off the market (domestically at least) before its Toronto International Film Festival premiere tonight.  Who doesn’t love a good ‘ol Christmas movie, perhaps the most reliable genre for feel good feelings?

Well this one certainly is a twist on the tradition as it centers on a gathering of British upper crust family and friends as they settle down for their holiday dinner knowing it is going to be the last dinner of their lives. With a deadly cloud coming in to slowly make its way  presumably across the world, it is now heading directly toward the impressive English estate of Simon(Matthew Goode) and wife Nell (Keira Knightley) who have invited a group of merry makers over for their final night on earth as the imposing cloud starts to swoop up humanity in blob-like fashion. Debuting feature film writer/director Camille Griffin wanted to use the holiday and the threat of environmental doom as a way to examine the privileged British class and their reactions to such an impending event. How will they cope? What sort of humanity  will rise to the occasion?

'The Good House' Toronto Film Festival Review: Sigourney Weaver Stands Out As An Alcoholic In Denial In Uneven Character Study

But don’t get me wrong.  This is not necessarily the ultimate downer Xmas flick of all time like a yuletide On The Beach meets Testament. Nope. Actually watching these revelers interact  feels like they, for the most part, have long come to terms with their impending doom and are determined to make the best of it. With a lively soundtrack that includes some classic tunes of the season (Jose Feleciano’s “Feliz Navidad” for one) , plus a rock out, dance your socks off scene set to “Fame” ( ‘I’m gonna live forever –remember my name’) , Griffin sets a spirited tone for much of it, that is until reality sets in, pushed to the forefront by Art, the young son of Nell and Simon, who challenges the idea that it is inevitable that everyone should accept they have to die. His angst grows increasingly over the course of the night, as does his determination to cheat fate. 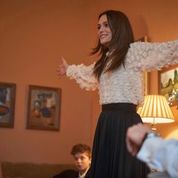 The bottom line is the British government has given red packages of “Exit” pills, a suicide prescription that will allow everyone the chance to die with dignity on their own timetable, rather than the horrid and slow death caused by exposure to the cloud that is described by newscasters.  Art is played memorably by Roman Griffin Davis who was also unforgettable as Jo Jo Rabbit and is instantly recognizable the moment he hits the screen here.  His real life brothers, twins Hardy Griffin Davis and Gilby Griffin Davis are also part of this family and wonderfully quirky. 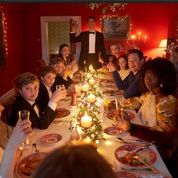 The entire ensemble is an exceptional group of British actors  including Annabelle Wallis as Sandra, Lily-Rose Depp as Sophie, Sope Dirisu as James, Kirby Howell-Baptiste as Alex, Lucy Punch as Bella, Rufus Jones as Tony, and Davida McKenzie as Kitty, an ethereal vision in her lovely white dress for the occasion (she is the younger sister of Thomasin McKenzie in case you were wondering).  Trudie Styler , also a producer here, is in it as well as Nicole. All of them weave in and out, clearly a tight group of friends ala The Big Chill.  They choose to be together on this one last night but each faces things from their own distinct POV. Considering this was written before Covid but is now coming out (likely in December, why not?) in the shadow  of this  unprecented worldwide pandemic it takes on new urgency and a feeling that this isn’t all that far-fetched. Maybe we are all doomed and should start to figure out how we will face the end. One particularly memorable scene involves a poignant final goodbye via zoom to Nell’s mother, the grandmother of Art and the kids as the family tries to keep a stiff upper lip in talking to grandma, hundreds of miles away who is just about to experience the cloud by herself. It has a real sense of melancholy to it.

The film’s title , Silent Night obviously has a Christmas context, but works on other levels and allows for a haunting rendition of the song sung on the soundtrack by Birdy just after the movie’s knockout ending, a real keeper that’ll have you talking. I am curious if they ever thought of calling this It WAS A Wonderful Life.

In addition to Styler , producers are Celine Rattray and Matthew Vaughn.