EXCLUSIVE: Elizabeth Klaviter, who served as executive producer/showrunner on CBS’ drama series Clarice, has been tapped to serve in the same capacity on the network’s newly picked up hourlong series So Help Me Todd, starring Marcia Gay Harden and Skylar Astin. She succeeds Liz Kruger and Craig Shapiro, who had signed on as EP/showrunners for the pilot of the CBS TV Studios-produced light drama. 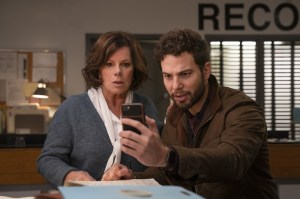 Created by Scott Prendergast, in So Help Me Todd, despite their opposing personalities, a talented but directionless P.I. who is the black sheep of his family begrudgingly agrees to work as the in-house investigator for his overbearing mother, a successful attorney reeling from the recent dissolution of her marriage.

Klaviter also joined Clarice, co-produced by CBS Studios and MGM TV, after the pilot. She previously served as executive producer on Fox’s medical drama series The Resident. Prior to that, she spent nearly a decade working on ABC’s Grey’s Anatomy and spinoff Private Practice, rising to co-executive producer on the mothership series. She is repped by APA, Circle of Confusion and attorney Jared Levine.