For Siksika Nation Chief Ouray Crowfoot, precisely how the beaded buckskin shirt and leggings his ancestor wore a century and a half ago ended up at a museum in Devon, England, is less important than finally having the opportunity this week to bring them back to southern Alberta.

"Were they sold? Were they stolen? Were they given as gifts? It was probably all of those things. I don't know how this got over here and I think it's irrelevant," Crowfoot told CBC News after an inspiring ceremony at the Royal Albert Memorial Museum in Exeter.

"They need to be back with the people who created these items."

The repatriation ceremony, which featured traditional Blackfoot or Siksika songs of heroism and colourful traditional headdresses, was the culmination of years of effort to repatriate a collection of items that belonged to the legendary Chief Crowfoot.

"It's a very strong emotional feeling reminding me about life back then," said Siksika councillor Jenny Goodin.

"I'm very honoured to be here and be reminded of Chief Crowfoot." 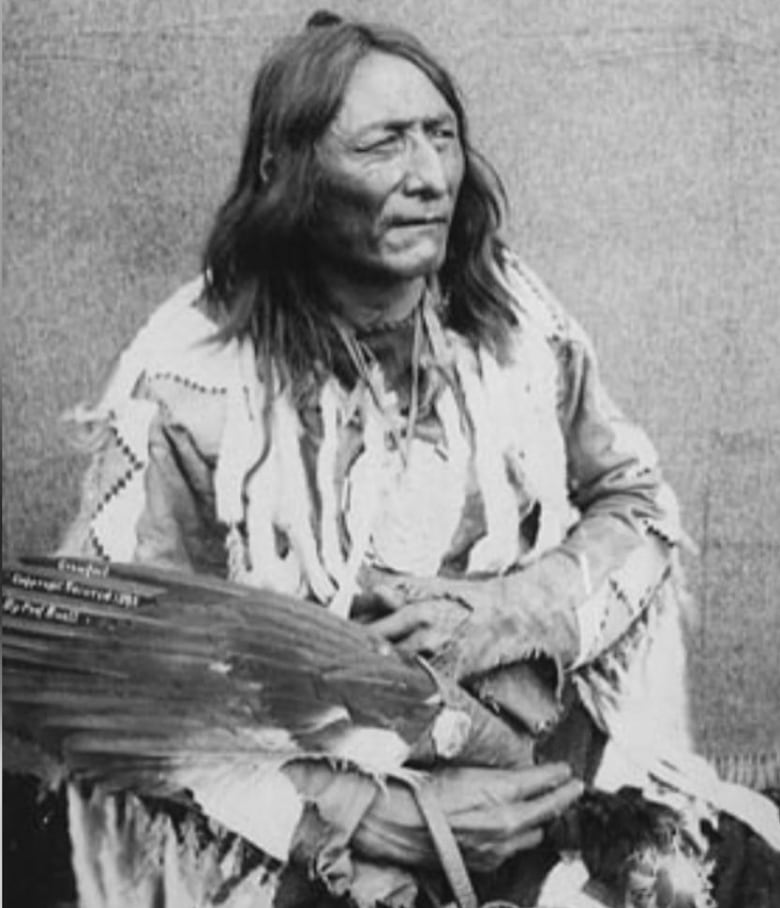 Issapomahksika, or Chief Crowfoot, is pictured in this 1886 photo, taken by Oliver Buell. (O.B. Buell/Library and Archives Canada/C-001871)

Crowfoot, who died in 1890, is revered by his people as a powerful warrior, an influential diplomat and a statesman whose influence transcended southern Alberta and was felt across the continent.

One of his legacies is Treaty 7, signed between the Blackfoot and the Crown.

"Until I saw [the Crowfoot collection] with its rightful owners today .. you don't really understand its significance," said Jon-Paul Hedge, the director of Exeter City Council, which manages the museum and who has been part of the repatriation efforts for several years.

13 hours ago
Duration 2:14
After lobbying for their return, an Alberta First Nation has received sacred regalia and artifacts that once belonged to Chief Crowfoot from a U.K. museum where they had been on display for more than a century.

Exeter city council voted more than two years ago to return the collection of Crowfoot's items but the process was delayed by COVID-19 and travel restrictions, said Hedge.

"It's not about what happened in the past. It's about Exeter city's relationship with Siksika Nation now — these are their items and we are happy to see them go to their rightful home." 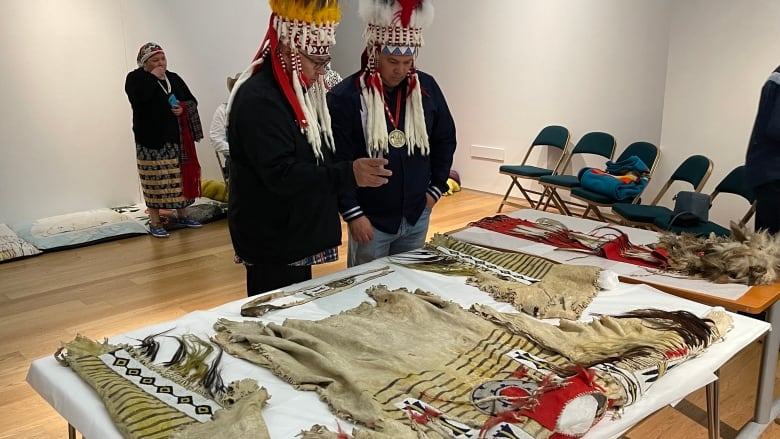 The most prominent piece of the Crowfoot collection is the beaded buckskin shirt, decorated with locks of human hair,  along with matching leggings.

There are also a bow, arrow, quiver, a pipe and other items.

They were all initially obtained from Crowfoot by Cecil Denny, a co-signatory of Treaty 7. From there, it appears he passed them onto a family member back in England who put them on display in Exeter. 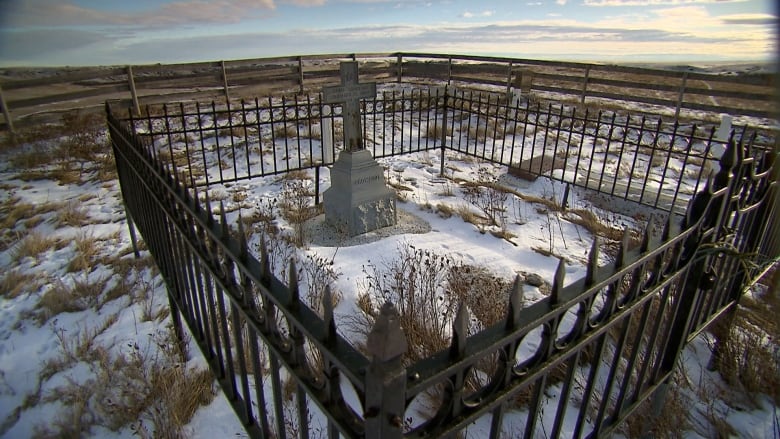 The grave of Chief Crowfoot is in Blackfoot Crossing, near where he signed Treaty 7. (Dave Rae/CBC)

The museum officially purchased the items from the family in 1904 for the sum of 10 pounds — an exorbitant amount at the time — and has held them until now.

In the coming days, the Crowfoot items will be carefully packed and put on a specially chartered flight to bring them back to Calgary. 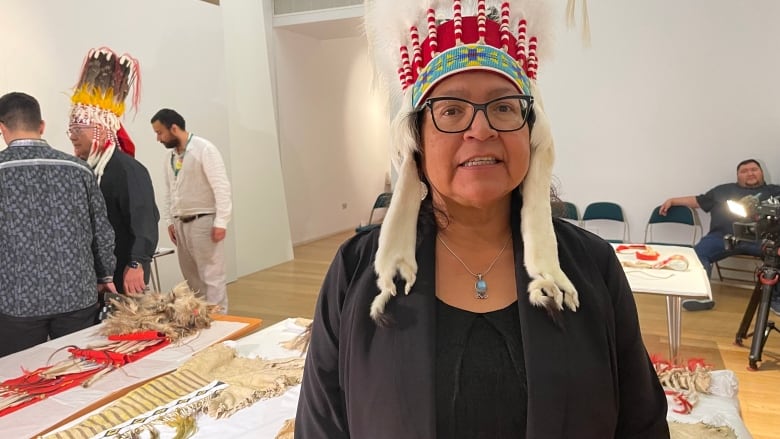 Councillor Jenny Goodin was part of the Blackfoot, or Siksika, delegation to Exeter and said she was 'very honoured to be here and be reminded of Chief Crowfoot.' (Chris Brown/CBC)

They're expected to arrive on May 25 and the Blackfoot are planning a welcoming ceremony as soon as the precious cargo clears customs and formally enters Alberta.

Beyond that, the plan is to put the items on display at the Blackfoot Crossing Historical Park outside Calgary.

Siksika elder Herman Yellow Old Woman, a former cultural curator at the site, helped start the repatriation process almost a decade ago, and was visibly moved at Thursday's ceremony.

"It gives me chills to think Canadians will be able to be educated the proper way — with evidence — to see a true history of our people," he said, suggesting the repatriation will help with the national reconciliation that's ongoing between Canadian Indigenous communities and wider society. 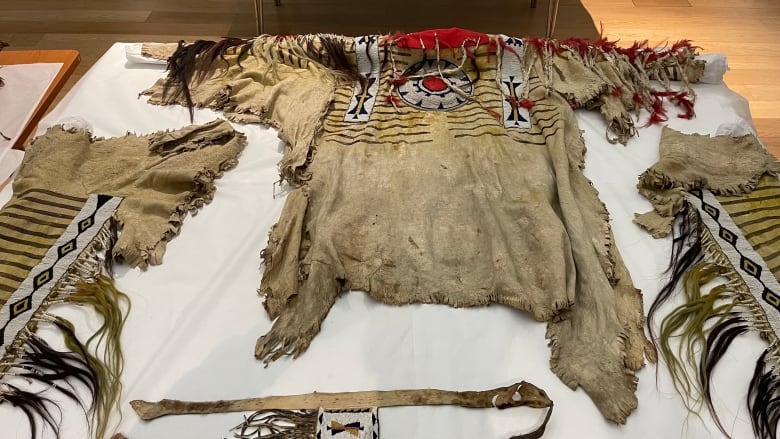 The items held by the Exeter museum included a beaded buckskin shirt worn by Chief Crowfoot and leggings. (Chris Brown/CBC)

"A lot of our children and grandchildren don't know our history and we are going to bring this home and we can share,"  said Yellow Old Woman.

In addition to meeting Exeter museum staff, the Siksika delegation has also been travelling further afield to visit British museums where other Blackfoot items are also being held.

Our CBC team met them at a museum in Bristol, where Yellow Old Woman surveyed several deer or elk shirts dating from the 19th century. 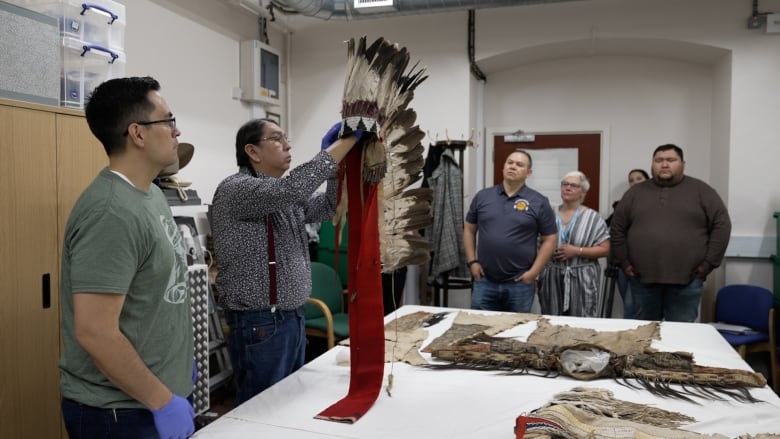 Members of the Blackfoot delegate visit a museum in Bristol, England and examine regalia in its collection. (Adrian Di Vergilio/CBC)

"They've been preserved [well]," he said of the collection in Bristol.

"But back home, we don't have old collections like this in North America, they're long gone. So it's amazing how well preserved a lot of them are, especially the shirts."

Ouray Crowfoot, the current chief, said the next step will be to hold similar discussions with the Bristol museum, and another in Manchester, to discuss future repatriations.