Emily VanCamp made her return to Fox’s The Resident in the Season 5 finale tonight and while it was exciting to see Nic Nevin and Conrad Hawkins (Matt Czuchry) reunited, alas, it was only in flashbacks. 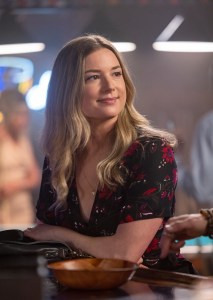 Conrad has been struggling with moving on romantically after losing the love of his life and the mother of his daughter, but memories could help him overcome some of that anxiety.

Throughout the episode, Conrad revisits the good ol’ days with Nic often getting lost in thought. While at a stoplight in the car with their daughter Gigi, he smiles as he snapped out of a daydream about a particular date with Nic.

He may never find the magic he did with Nic but he can surely love again and move on with his life, as she would want him to. And all of that is put into perspective when he chats with a patient who similarly lost a loved one suddenly.

Devon Pravesh (Manish Dayal) was deeply affected by the loss of his patient, a pregnant mother and wife, amid his planned exit from Atlanta in an attempt to put distance between him and Leela (Anuja Joshi). She may not have plans to have children, but he eventually realizes he’s breaking up a special relationship for an uncertain future. 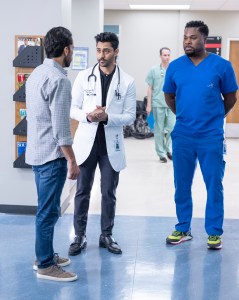 Series executive producer Andrew Chapman broke down the events of the Season 5 finale via email with Deadline and he addressed whether or not fans could expect to see more of Nic via flashback in the future.

DEADLINE: What can you share about how you convinced VanCamp to return?

ANDREW CHAPMAN: Emily was game from the start. Because she had to drop out of the show so suddenly at the start of Season 5, she never really got a chance to say goodbye to the crew and cast in Atlanta. She wanted very much to do that. Also, she was excited to bring some closure to the Nic and Conrad relationship in the show. When we reached out to her to be involved in the season finale she jumped at the chance. She was great.

DEADLINE: What was the energy like on set when she and Matt reunited?

CHAPMAN: They seem like the ol’ Nic and Conrad fans know and love.
I wasn’t there, but show creator Amy Holden Jones was, and she said that the energy on set was very powerful. The last scene that Matt Czuchry and Emily VanCamp shot when Nic and Conrad are in bed together discussing what life would be like if one of them died, had everyone on the verge of tears.

DEADLINE: What are your plans for Conrad’s future?

CHAPMAN: We wanted to bring closure to the entire season with this episode, to finally have Conrad realize that he was emotionally ready to move on with his life. But we wanted to hold off on his making a choice on who to move with until season 6 when we could start a whole new storyline where Conrad goes in his love relationships. We have very specific plans for who he chooses in his love life, but you’ll have to tune in to season six to know what those plans are!

DEADLINE: Could Nic return via flashback again in the future?
CHAPMAN: This is it, no more plans for flashbacks with Emily.

DEADLINE: Is it safe to assume Devon is not leaving for Baltimore? What can you share about the future of his complicated relationship with Leela?

CHAPMAN: It’s safe to assume that Devon’s not leaving the hospital, not yet. But we want him to stay a superstar scientist, an ambitious young doctor with big plans. Those plans may still run afoul of his relationship with Leela.

DEADLINE: It looked like seeing her sister Padma (Aneesha Joshi) pregnant with twins might change things for Leela. Is that something you’re considering?

CHAPMAN: Yes, she may reconsider her future as a potential mother because of her sister, but she is also an ambitious young doctor with big plans, just like Devon. Ambitions and plans may yet clash with desires to stay a couple and become a family. 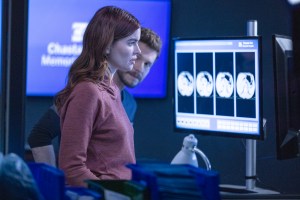 DEADLINE: Bell (Bruce Greenwood) was talking about Leela’s future and how he’s hoping to prep her to eventually take over his role. What can you share on that front?

CHAPMAN: We plan on delving deep into Bell’s move into teacher and mentor in Season 6. He is going to pass the torch of superstar general surgeon to Leela, the doctor he thinks best suited to handle all the pressures that role brings. We’re planning on having Season 6 be the ultimate redemption for Bell, a character who started the show, way back in Season 1, as a villain, and will now become a venerated teacher and mentor.

DEADLINE: Bell was put through the wringer this season. You guys know a thing or two about weddings. What are your plans for the Bell/Voss nuptials?

DEADLINE: How involved of a father will Raptor (Malcolm-Jamal Warner) be? Will this adorable baby help him heal from the loss of his mom? Will it bring him and Padma together again?

CHAPMAN: We think the idea of AJ Austin being a father to two small children while not being romantically involved with the mother of those children, is a very juicy storyline. We think parenting will help him heal from the loss of his mother, but we doubt it will turn him into a cuddlier version of the infamous, hard-edged Raptor. At least we hope it won’t!

DEADLINE: What stories are you hoping to tell next season?

CHAPMAN: We have a bunch of soapy storylines planned for Season 6: Conrad and his love life, Devon and Leela and their budding family, Kit and Bell’s wedding, Cade (Kaley Ronayne) and her narcissistic father (Andrew McCarthy), and Billie (Jessica Lucas) and her longing for Conrad.

But we also want to dive into our classic unaccountable medical storylines: addiction in the ranks of doctors, corruption of medicine through money, doctors allowed to practice when they shouldn’t, street violence, and its catastrophic effect on hospitals. Have no fear, The Resident will continue to tackle the problems in American healthcare in every episode.

Tom Brady To Be Featured In Future Netflix...