As It Happens6:14Cassie the robot runs a record-breaking, 100-metre dash

If you've recently run track at Oregon State University, chances are that you've crossed paths with an unusual competitor: an athletic, bipedal robot.

Cassie first made a name for itself in 2021 by completing a 5K on campus with a time of 53 minutes. After months of training, the torso-less, faceless machine has now set a Guinness World Record for the fastest 100-metre dash by a bipedal robot.

It clocked in at 24.73 seconds, which is still far from Usain Bolt's record-breaking human time of 9.58 seconds.

"Cassie runs it like a moderate jog," graduate student Devin Crowley told As It Happens host Nil Köksal. "It's impressive for a robot, but it's not quite dangerous yet."

Cassie the robot runs a record

Crowley spent six months training Cassie for the 100-metre dash, which took place on May 11. He's proud of the robot, although the sight of it sprinting across OSU's Whyte Track and Field Center was otherworldly.

"I like to describe it as the lower half of the Terminator," he said. "But it's more like an ostrich.... It has inverted knees. Technically, they're ... not knees; they're ankles. So it looks like a bird. Just a pelvis with legs, and they bend mostly backwards."

How to build a running robot

Oregon State robotics professor Jonathan Hurst, artificial intelligence professor Alan Fern and their students developed Cassie's structure and software in 2017. They used funds from the National Science Foundation and a $1-million US grant from the Defense Advanced Research Projects Agency. They also lead the robot to its 5K feat.

Crowley built on that work during his final grad studies project to train Cassie for the dash.

The robot had to start by standing still, and then accelerate and run until it crossed the finish line. It then had to slow down and return to a standing position — which was the biggest challenge for Crowley.

He says he specialized Cassie's programming to run as fast as possible. It's not good at walking, turning or standing still. So when Cassie crossed the finish line, the robot slowed down until it was stepping in place. Even at its slowest speed, it still steps. 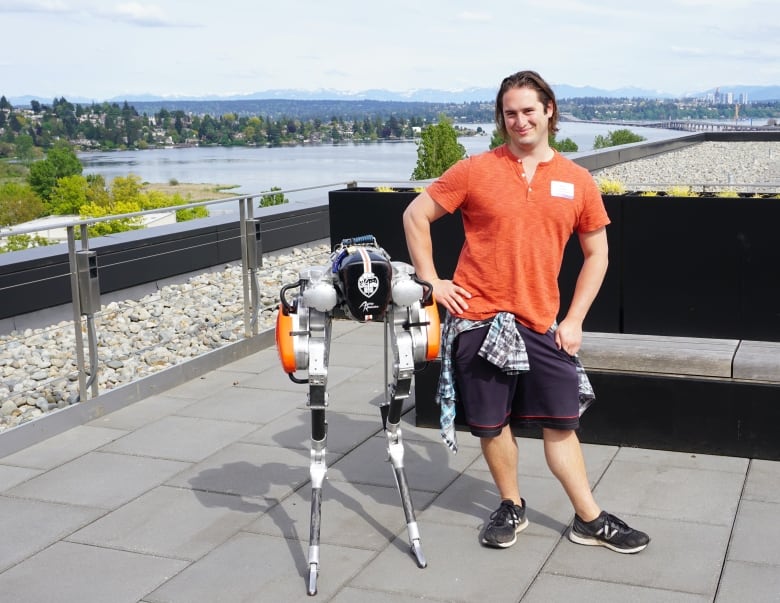 University of Bristol robotics expert Nathan Lepora called Cassie's dash "hugely impressive." He once helped develop a robot that can gently shake hands using an artificial fingertip with a sense of touch.

"I noticed [Cassie] stumbled a few times," he wrote in an email to As It Happens. "Humans rely on our sense of touch in our feet to help us run — you can't walk very well with a numb leg. So maybe these robots could be even better if they had tactile feet, then they might be able to run faster or even over uneven ground."

He said it's great to see robots like Cassie coming from a university research lab, rather than a private company like Boston Dynamics.

"Much of the research in this area ... has been done privately, so other academics have not been able to build upon the research," he said.

"Legged robotics is an important area because it allows robots to move freely around human environments. It is hard to go up stairs if you are on wheels."

Crowley had a lot of fun training Cassie for the 100-metre dash. He says he used a learning-based approach to fine tune the robot into a runner.

"We don't tell it how to run. We tell it when it's doing a good job at running," he said. "It plays around. It tries random actions, essentially, until it figured out which things we tell it are best. And as a result of this approach, it's much more robust." 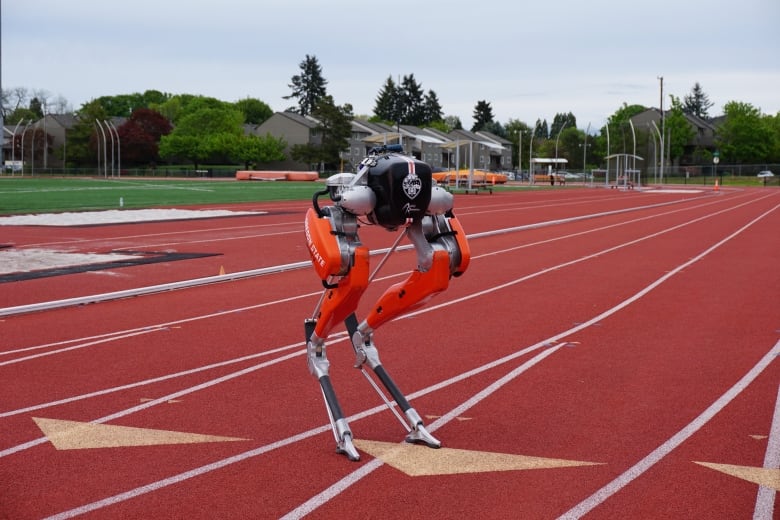 For Cassie's record-breaking 100-metre dash, the robot started by standing still, then accelerated to run as fast as possible until it crossed the finish line. (Oregon State University)

The trainer in him referenced some moments in the video of the record-breaking run, when Cassie was about to wipe out, but was able to recover.

But Cassie has still been bumped and bruised over the years — and its physical body will soon retire.

The OSU Dynamic Robotics and AI Lab has access to a new model, to which they will upload Cassie's software. The next version of Cassie will have vision so that it's no longer running blind, literally.

"There are a number of different directions that Cassie's going," Crowley said. Report: 90% of companies affected by ransomware...