A happy surprise of “Thoughts of a Colored Man,” which opened Wednesday night on Broadway, is that it’s much more entertaining than its portentous and literary-sounding title would suggest.

What you expect to resemble a book from a college syllabus actually gets belly laughs and a tear or two. And at 90 minutes, the show is not a second too long or short.

Keenan Scott II’s new play at the Golden Theatre, with refreshing warmth, gives us what it promises: the internal musings of a group of New York black men.

These often friendly, occasionally combative, always engaging guys live in a gentrifying Brooklyn neighborhood, where barbershops scrape by as Whole Foods thrives and luxury condos are eyed with suspicion and envy by longtime residents.

With its contentious BK setting and poetic language, “Thoughts” can come across as a Spike Lee joint that has no affiliation to Spike Lee. That’s a good thing.

The men’s names in the script are Passion (Luke James), Love (Dyllón Burnside), Lust (Da’Vinchi), Happiness (Bryan Terrell Clark), Anger (Tristan “Mack” Wilds), Depression (Forrest McClendon) and Wisdom (Esau Pritchett) — don’t worry, they don’t call each other that — and their monickers pair with their ages. The 20-year-old is obsessed with no-strings sex, while the lost man in his mid-30s finds life increasingly hard to bear as bills pile up.

And that’s what’s most successful about Scott’s writing — his ability to be both street-corner specific and universal at the same time. Find me a 35-year-old who can’t relate to debt and purposelessness. (OK, leave Lady Gaga out of it.)

Scott also makes the point that not every person’s life experience in this nabe is the same. Happiness just moved to a fabulous high-rise apartment with his boyfriend and feels ostracized from his community because he’s gay and makes good money.

“Why is struggle synonymous with being black?” he asks. 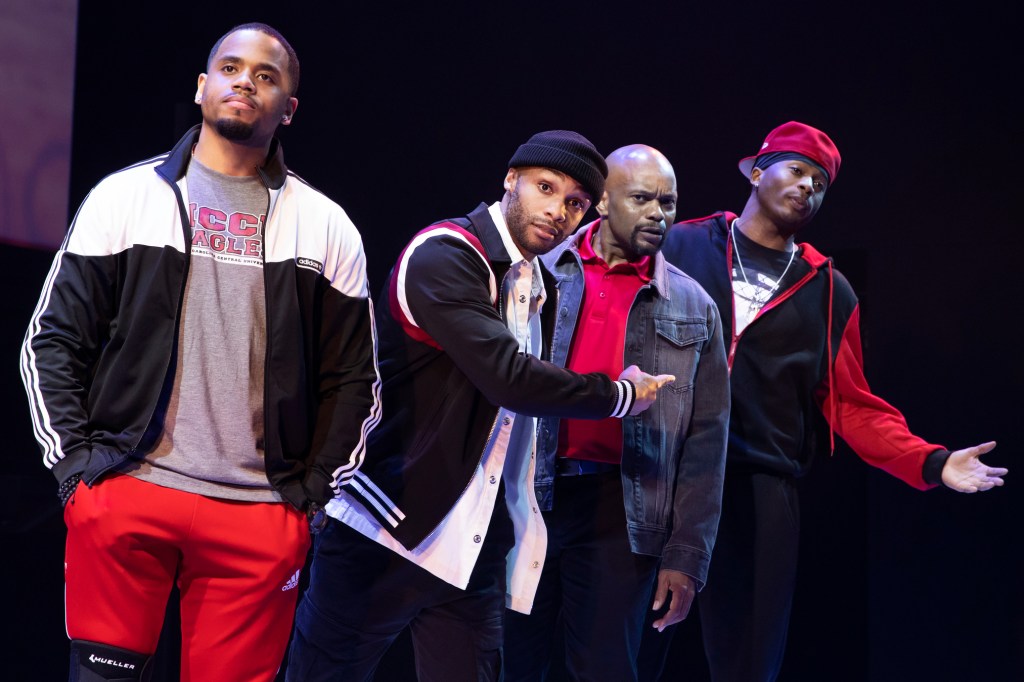 As Depression, McClendon hits home the hardest. The character stocks fancy grocery store aisles to help support his brother, and all day he’s forced to act chipper for whiny customers who can’t find the kombucha.

“Tired of living. Terrified of dying,” he says. Ouch.

McClendon is an especially fascinating actor to watch. The performer, who was last on Broadway a decade ago in the shattering Kander and Ebb musical “The Scottsboro Boys,” jumps from emotional extreme to emotional extreme like a kid stomping in puddles. In an instant, he’s mad, shy, tickled or piercingly awkward.

Wisdom, meanwhile, is an African immigrant in his 60s who runs the block’s barbershop, and the magnetic Pritchett lends the play a grounding moral authority.

Not everything works in Scott’s drama. Some scenes feel hastily written and don’t connect full-throatedly to the big picture. Anger, for instance, is a college basketball coach and delivers a monologue in which he’s frustrated that one of his players already has an endorsement deal — and a diamond-studded watch — per the new NCAA rules.

Ripped from the headlines? Yes. Believably handled? No.

Anger’s later speech about his own failed b-ball career, part of a crescendo to an emotional ending, is more powerful and fleshes out the character better.

At times I wished director Steve Broadnax III’s staging, set in the shadow of a billboard on which many locations are projected, was a tad more polished. Characters’ entrances and exits feel arbitrary and the stage could be used more dynamically. But — you know what? — too many shows these days are being polished by auteurs until they’re indistinct, textureless blobs. Many a sleek, ultra-bright British import is guilty of that offense.

Facebook says it will do more to prevent online...