Trinny Woodall is a British beauty entrepreneur as well as a TV celebrity who is the founder and CEO of beauty brand "Trinny London", one of Europe's fastest-growing direct-to-consumer start-ups. In addition, she is also a fashion and makeover expert, TV presenter, and author. After she met Susannah Constantine after ten years in 1994, they started writing a weekly fashion column 'Ready to Wear' for 'The Daily Telegraph' which led to the launch of their own internet fashion-advice business and the release of their first fashion-advice book. 'Ready to Wear' soon became popular with the readers and ran for seven years. They even debuted on television, hosting a daytime shopping show, also called "Ready to Wear", on Granada Sky. They launched an online venture called 'Ready2wear.com' in November 1999 which was dissolved by July 2001. They also debuted on BBC Two with their makeover reality television show, "What Not to Wear" on 29th November 2001 which ran until 2005. Woodall and Constantine also released the book entitled "What Not to Wear" in 2002 which gained them a British Book Award in 2003 for The TV & Film Book of the Year. The pair co-wrote 11 fashion advice books, several of which became best-sellers in the United Kingdom and the United States, and have now sold over 3 million copies worldwide. They also launched their shapewear range "Trinny & Susannah's Original Magic Knackers" in 2003, which are sold in 30 countries around the world. She started her career at the age of eighteen as a personal assistant to a commodity trader.  However, fashion and makeover have always been her first love.

What is Trinny Woodall Famous For? 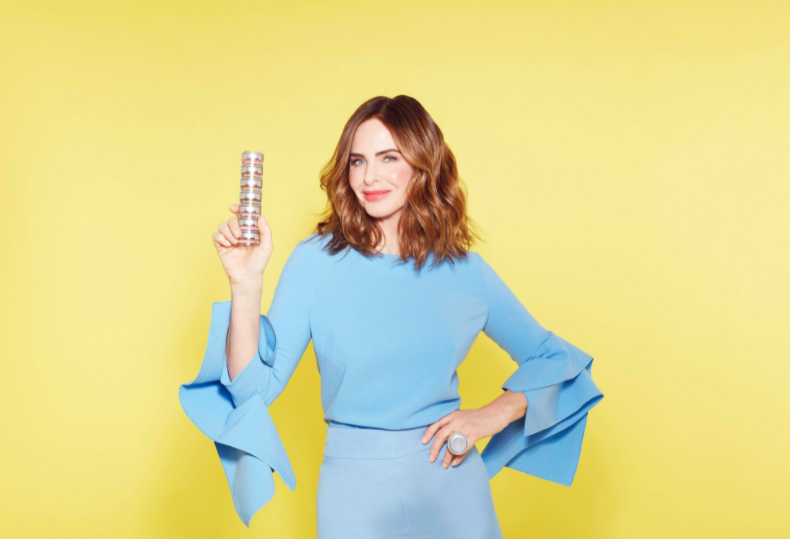 What Nationality is Trinny Woodall? Know About Her Age, Parents, Education

Trinny Woodall was born on 8th February 1964 which marks her present age of 57 as of 2021. Her place of birth is in Marylebone, London, England. Her birth name is Sarah-Jane Duncanson Woodall. She holds British nationality and her ethnic background is British-white. Her race is White. She was born as the youngest child among six including three half-siblings from her father's first marriage. One of her brother's name is Mark Woodall. By occupation, her father was a banker and her maternal grandfather was Sir John Duncanson, controller of the British steel industry in the last two years of the war, who went on to become managing director of the British Iron and Steel Federation (BISF) in August 1945 and then managing director of Lithgows in 1949. Her mother, Ann passed away at the age of 90 battling dementia. Aquarius is her Zodiac sign and she follows the Christianity religion.

About her education, Trinny Woodall was sent home from school after cutting off another pupil's plait. At that time, she was five. Then, she was educated at boarding schools from the age of six, which included Queen's Gate School in Queen's Gate, South Kensington, London. In addition, she attended Baston School for Girls.  She has described one of the boarding schools as "cruel" and "sadistic". Later, she also attended boarding schools in France and Germany between the ages of twelve and fifteen. During her school years, she felt overshadowed by her older sister who was the "star of the school", which prompted pupils to use Woodall to get to her sister. 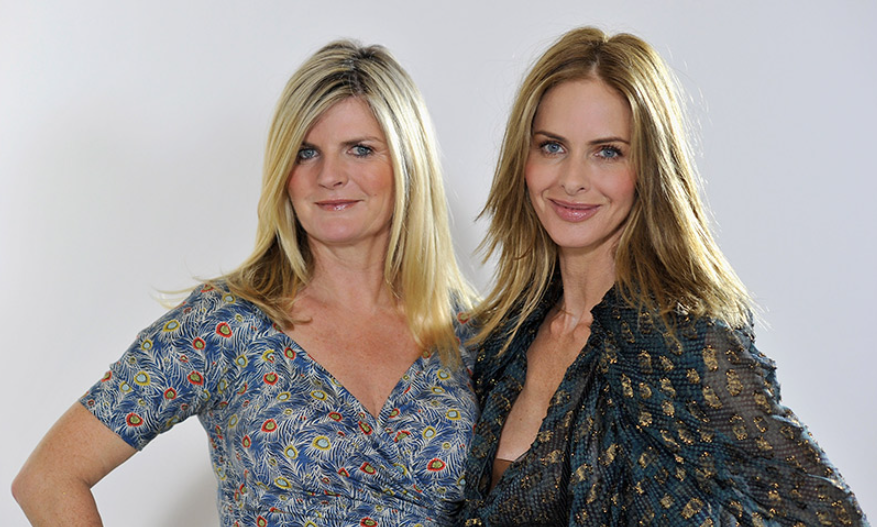 Who is Trinny Woodall married to?

Trinny Woodall was a married woman and she is currently in a relationship. After her ex-husband, Elichaoff passed away, she is in a long-term relationship with Charles Saatchi who is a businessman by occupation. She has been in a relationship with Saatchi since 2013. They live together in London. She said 'Any friend who's known me for years will know I'm the most self-sufficient person they've ever met. I know how hard I work. I know I pay for every single thing in my life, apart from the roof over my head because I live with Charles'. 'Every single thing I pay for and every element of what I put against business expenses I'm careful of.' Charles Saatchi was previously married to Nigella Lawson. As of today, the couple is enjoying their life a lot. Her sexual orientation is straight. 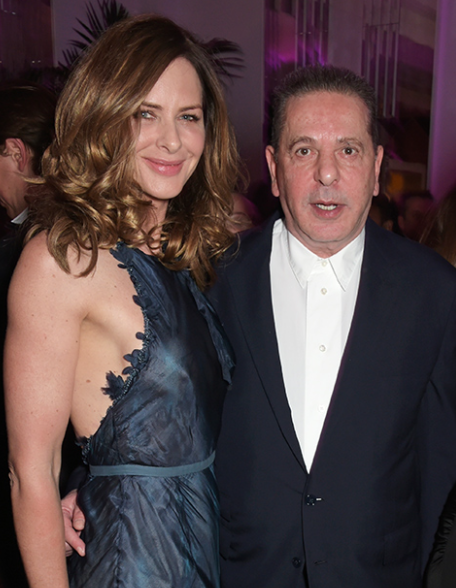 Previously, Trinny tied a knot to her handsome husband, Johnny Elichaoff who is a musician turned company director by profession. Their wedding was held at her family church, St Columba's, situated in Pont Street, Knightsbridge in the year 1999. The church was the venue for her parents' wedding and Woodall's christening, and her Scottish grandfather is buried there. Later, the couple announced their separation and intention to divorce in the year 2008. In 2014, her husband, Elichaoff died. She also has a stepson Lyla Elichaoff from Johnny's ex-wife. 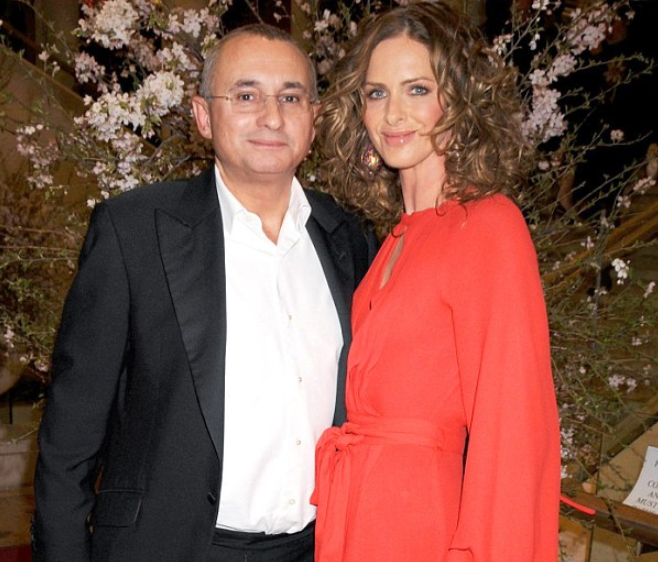 Trinny Woodall is also an avid supporter of charities. She stood as a trustee of a British charity helping those with alcohol and substance abuse issues (at the time called The Chemical Dependency Centre and later renamed Action on Addiction in 2007). She even spoke openly about her own substance abuse problems, including addictions to cocaine and alcohol. She continued using for five years before making the final decision to quit. She is a proud supporter of Breast Cancer Now, Spread a Smile and The Princes Trust.

How much is Trinny Woodall Net Worth?

Trinny Woodall is one of Europe's fastest-growing direct-to-consumer startups, with a net worth of £180 million ($250 million) as of 2021. She is famous as the taller half of the international style duo Trinny and Susannah. Trinny spent much of her 30s time introducing 'super slimming' style makeovers to Oprah's viewers and co-hosting TV shows that taught women how to dress. Her major source of wealth comes from her entrepreneur career, entertainment career, fashion career, and book career. Today, she is living a lavish lifestyle with the earnings she is making from her career work. Woodall and Constantine's Book'What Not to Wear' made sales worth £8.7 million which led to a £2 million book deal to produce more of their fashion books. "Trinny London", one of Europe’s fastest-growing direct-to-consumer start-ups which was founded in the year 2017 has sold more than 5 million products in over 180 countries at present.

How tall is Trinny Woodall?

Trinny Woodall is a beautiful TV celebrity. At the age of 57, she still looks very young as she maintains her body a lot. She has a perfect height of 175 cm or 1.75 m or 5 ft 10 in and her balanced bodyweight consists of 55 Kg or 121 lbs. Her body measurement is 29-23-29 in (breast-waist-hips). Her eye color is blue and her hair color is light brown. Overall, she has got a healthy body and she is very conscious about her food intake.