Voting began Friday in Moscow-held regions of Ukraine on referendums to become part of Russia, Russian-backed officials there said.

The Kremlin-orchestrated referendums, which have been widely denounced by Ukraine and the West as shams without any legal force, are seen as a step toward annexing the territories by Russia.

The votes are being held in the Luhansk, Kherson and partly Russian-controlled Zaporizhzhia and Donetsk regions.

The vote, which asks residents if they want their regions to be part of Russia, is certain to go Moscow's way. That would give Russia the pretext to claim that attempts by Ukrainian forces to regain control are attacks on Russia itself, dramatically escalating the seven-month war.

The balloting will continue for five days through Tuesday.

The referendums follow Russian President Vladimir Putin's order of a partial mobilization, which could add about 300,000 Russian troops to the fight.

Russia’s troop mobilization begins with men being rounded up

10 hours ago
Duration 2:09
Videos are surfacing of what Russia’s massive troop mobilization looks like, with men mostly from poorer neighbourhoods being rounded up to fight in Ukraine. Within Russia, tension and doubt are on the rise, and people are fleeing in droves.

As the votes were getting underway in the occupied regions, Russian social media sites were full of dramatic scenes of tearful families bidding farewell to men departing from military mobilization centres. In cities across the vast country, men hugged their weeping family members before departing as part of the draft.

Russian anti-war activists, in the meantime, planned more protests against the mobilization.

Election officials will be bringing ballots to people's homes and setting up makeshift polling stations near residential buildings during the first four days of the referendums, according to Russian-installed officials in the occupied regions, who cited safety reasons. Tuesday will be the only day when the voters will be invited to come to regular polls.

Polls also opened in Russia, where refugees from the occupied regions can cast their votes. 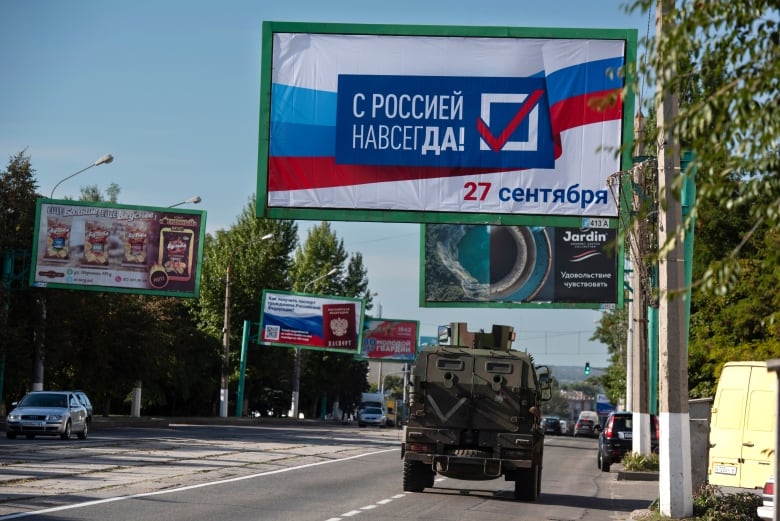 A military vehicle drives along a street under a billboard reading 'With Russia forever, September 27,' in Luhansk, Ukraine, on Thursday. It is one of four regions that will hold referendums on joining Russia. (The Associated Press)

Denis Pushilin, separatist leader of Moscow-backed authorities in the Donetsk region, called the referendum on Friday "a historical milestone."

Vyacheslav Volodin, speaker of Russia's lower house of parliament, the State Duma, addressed the occupied regions Friday in an online statement, saying: "If you decide to become part of the Russian Federation — we will support you."

Ukrainian President Volodymyr Zelenskyy only briefly mentioned the "sham referenda" in his nightly address in which he switched from speaking in Ukrainian to Russian to directly tell Russian citizens they are being "thrown to their deaths."

"You are already accomplices in all these crimes, murders and torture of Ukrainians," he said. "Because you were silent. Because you are silent. And now it's time for you to choose. For men in Russia, this is a choice to die or live, to become a cripple or to preserve health. For women in Russia, the choice is to lose their husbands, sons, grandchildren forever, or still try to protect them from death, from war, from one person."

In Geneva, a team of experts commissioned by the UN's top human rights body to look into rights violations in Ukraine said Friday its initial investigation turned up evidence of war crimes in the country following Russia's invasion nearly seven months ago.

The experts from the Commission of Inquiry on Ukraine, mandated by Human Rights Council earlier this year, have so far focused on four regions — Kyiv, Chernihiv, Kharkiv and Sumy.

Presenting their most extensive findings so far, they cited testimonies by former detainees of beatings, electric shocks and forced nudity in Russian detention facilities, and expressed grave concerns about executions in the four regions.

"We were struck by the large number of executions in the areas that we visited. The commission is currently investigating such deaths in 16 towns and settlements," Erik Mose, the commission's chairman, said. He said his team had received and was documenting "credible allegations regarding many more cases of executions."

President Putin calls up 300,000 reservists for Russia's war in Ukraine

Ukraine's Ambassador to Canada, Yulia Kovaliv, responds to news that Putin has mobilized 300,000 reservists to help his military campaign in Ukraine - and his threat of nuclear retaliation.

He said the team had examined two incidents of ill-treatment against Russian soldiers by Ukrainian forces.

Mose said an unspecified number of Russian soldiers were found to have committed crimes of sexual or gender-based violence, with victims ranging in age from four to 82 years old.

Russian and Ukrainian forces are exchanging fire as both sides refuse to concede ground.

On Friday morning, pro-Russia officials in the Zaporizhzhia region reported a loud blast in the centre of Melitopol, a city that Moscow captured early on in the war. Official Vladimir Rogov didn't offer any details as to what caused the explosion and whether there was damage and casualties. 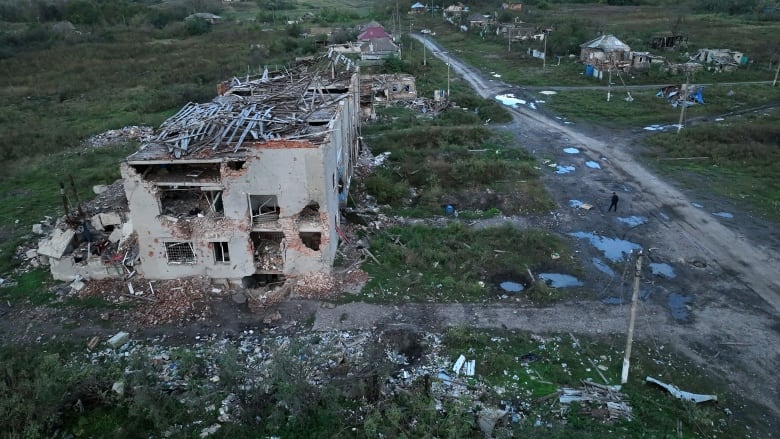 An aerial view of the small destroyed village Hrakove is seen on Thursday in Eastern Ukraine. In recent weeks, Ukrainian forces have reclaimed villages as Russian forces have withdrawn from areas they've occupied since early in the war. (Paula Bronstein/Getty Images)

Moscow-backed authorities in the Donetsk region also accused Ukrainian forces of shelling the city of Donetsk, the region's capital, and the nearby city of Yasynuvata.

Ukrainian officials, in turn, reported new rounds of Russian shelling in various parts of the country. Vitaliy Kim, governor of the Mykolaiv region in southern Ukraine that borders the Kherson region, said explosions rang out in the city of Mykolaiv in the early hours of Friday.

Valentyn Reznichenko, governor of the Dnipropetrovsk region, said the Russians unleashed a barrage of shelling on Nikopol, a city across from the Dnieper River from the Zaporizhzhia nuclear power plant, on Friday morning.