Updates from the ground on Day 81 of the war

Fresh off his country's Eurovision win, a defiant Ukrainian President Volodymyr Zelensky vowed early Sunday to one day host the song contest in the embattled city of Mariupol, which is almost entirely in Russian hands aside from a stalwart group of a few hundred Ukrainian fighters who continue to hold out in a steel factory.

Ukraine's Kalush Orchestra won the popular contest with its song Stefania, which has become a popular anthem among Ukrainians during the war, and its victory was a morale booster.

"Our courage impresses the world, our music conquers Europe," Zelensky said on Facebook. "Next year, Ukraine will host Eurovision!"

The band made an impassioned plea during the show to help the fighters still in the Azovstal steel plant in the port city, and Zelensky said "one day" the contest would be held "in a Ukrainian Mariupol." 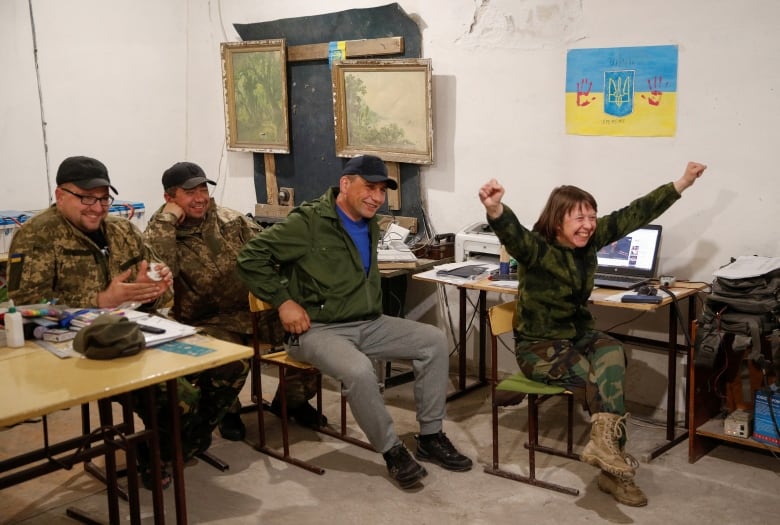 The president's optimistic words come as Russian troops are retreating from Kharkiv, the country's second-largest city, after bombarding it for weeks, and Moscow's forces continue to engaged in a grinding battle for the country's eastern industrial heartland, the Donbas.

Russia has now likely lost one-third of the ground combat forces it committed in February and continues to suffer "consistently high levels of attrition" while failing to achieve any substantial territorial gains over the past month, Britain's Defence Ministry said in its daily intelligence update Sunday.

"Russia's Donbas offensive has lost momentum and fallen significantly behind schedule," the ministry said on Twitter, adding that the forces are suffering "continued low morale and reduced combat effectiveness."

"Under the current conditions, Russia is unlikely to dramatically accelerate its rate of advance over the next 30 days," the ministry said. 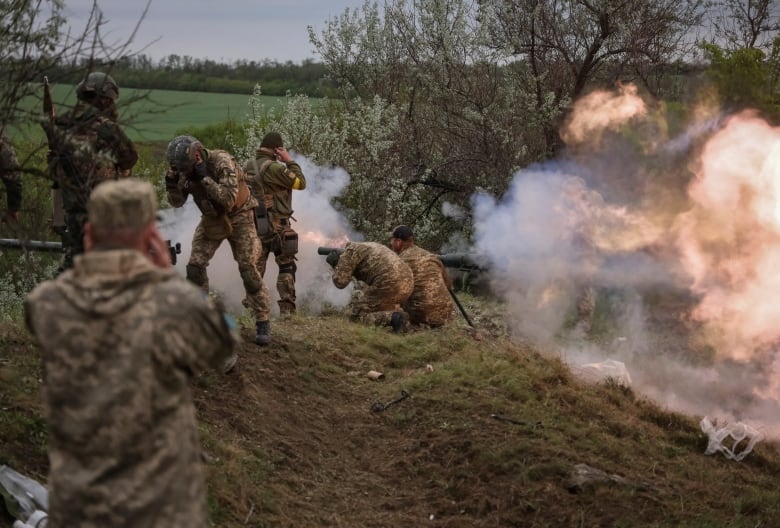 Ukrainian servicemen of the Territorial Defence Forces fire an anti-tank grenade launcher as they take part in a training exercise in Ukraine's Dnipropetrovsk region on Saturday. (Gleb Garanich/Reuters)

In the western city of Lviv, a Russian missile hit "military infrastructure facilities" early Sunday morning, but there was no immediate information on dead or injured, said Lviv Regional Governor Maksym Kozytskyy on the Telegram messaging app.

Russia has been targeting rail facilities and other critical infrastructure in and around Lviv, which is near the Polish border and has been a major gateway for NATO-supplied weapons.

Western officials have said despite the attacks there has been no appreciable impact on Ukraine's ability to resupply its forces.

With Russian forces now pulling back from the northeastern city of Kharkiv, Ukraine's military has said Moscow is now focusing on guarding supply routes, while launching mortar, artillery and airstrikes in the eastern region of Donetsk in an attempt to deplete Ukrainian forces and destroy fortifications.

Russian forces control a horseshoe-shaped swath of territory in the Ukrainian areas of Donetsk and Luhansk, which make up the Donbas region, the border area where Ukraine has battled Moscow-backed separatists since 2014. 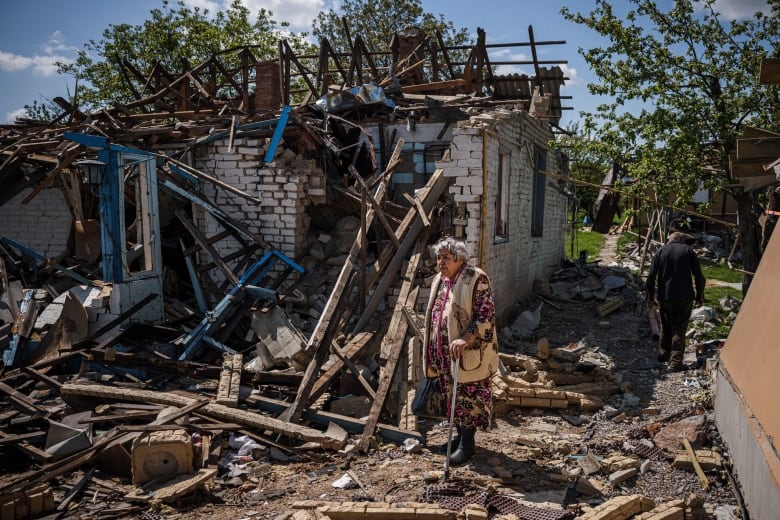 A couple brings their luggage out of their destroyed house in the village of Vilkhivka, near Kharkiv, on Saturday. Dozens of houses in Vilkhivka, a village of about 2,000 inhabitants, were gutted by shells, explosions or fires. (Dimitar Dilkoff/AFP/Getty Images) 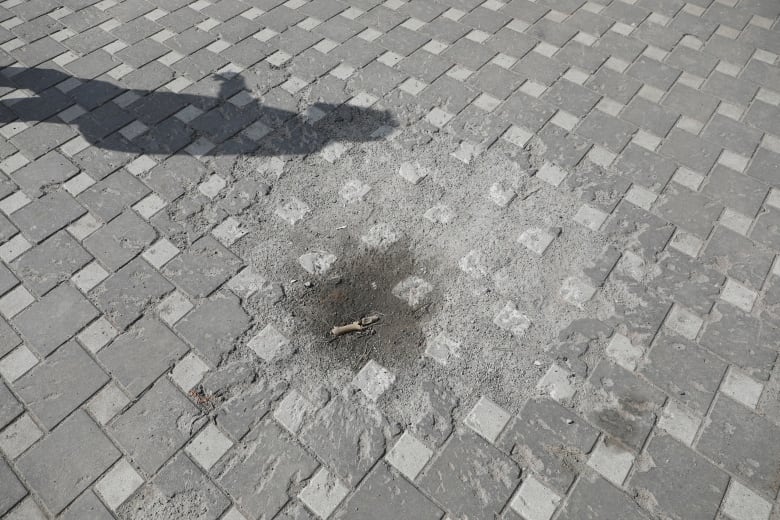 A shell crater is pictured in a damaged residential neighbourhood in Irpin, on the outskirts of Kyiv, on Saturday. (Marius Bosch/Reuters)

Fighting grinds on in eastern region

In the southern Donbas, the Azov Sea port of Mariupol is now largely in Russian control, except for the few hundred troops left in the steel factory.

A convoy of between 500 and 1,000 cars carrying civilians out of the city was reportedly able to reach the Ukrainian-held city of Zaporizhzhia on Saturday, while Ukrainian Deputy Prime Minister Iryna Vereshchuk said authorities were negotiating the evacuation of 60 severely wounded troops at the steelworks.

After failing to capture Kyiv following the Feb. 24 invasion, Russian President Vladimir Putin has shifted his focus eastward to the Donbas, aiming to encircle Ukraine's most experienced and best-equipped troops, and to seize territory still under Ukraine's control. 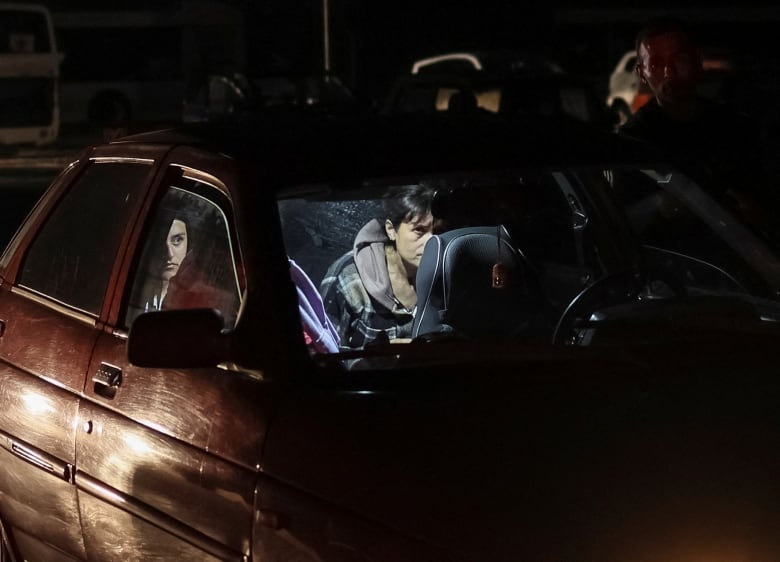 Ukrainian refugees from Mariupol sit inside a car as they arrive at a registration and humanitarian aid centre for internally displaced people in Zaporizhzhia, Ukraine, on Saturday. (Gleb Garanich/Reuters)

Airstrikes and artillery barrages make it extremely dangerous for journalists to move around in the east, hindering efforts to get a full picture of the fighting. But it appears to be a back-and-forth slog without major breakthroughs on either side.

Russia has captured some Donbas villages and towns, including Rubizhne, which had a prewar population of around 55,000.

Zelensky said Ukraine's forces have also made progress in the east, retaking six towns or villages in the past day. In his nightly address Saturday, he said "the situation in Donbas remains very difficult" and Russian troops were "still trying to come out at least somewhat victorious."

"Step by step," Zelensky said, "we are forcing the occupants to leave the Ukrainian land."

Kharkiv, which is near the Russian border and only 80 kilometres southwest of the Russian city of Belgorod, has undergone weeks of intense shelling. The largely Russian-speaking city with a prewar population of 1.4 million was a key military objective earlier in the war, when Moscow hoped to capture and hold major cities.

Regional Gov. Oleh Sinegubov said via the Telegram messaging app that there had been no shelling attacks on Kharkiv in the past day.

He added that Ukraine launched a counteroffensive near Izyum, a city 125 kilometres south of Kharkiv that has been held by Russia since at least the beginning of April.

WATCH | Ukraine claims victory in battle for its second-largest city:

15 hours ago
Duration 2:07
The Ukrainian military says the Russian forces are now withdrawing from the country's second largest city and focusing on the eastern Donetsk region.

Putin has justified the war in Ukraine by claiming it was a response to NATO's expansion in Eastern Europe.

But the invasion has other countries along Russia's flank worried they could be next, and in the past week the president and prime minister of Finland said they favour seeking NATO membership. Officials in Sweden are expected to announce a decision Sunday on whether to apply to join the Western military alliance.

In a phone call Saturday, Putin told Finnish President Sauli Niinisto that there are no threats to Finland's security and joining NATO would be an "error" and "negatively affect Russian-Finnish relations."

2 days ago
Duration 2:06
Finland's leaders have signaled plans to apply to join the NATO alliance as a result of the war in Ukraine. It's a move that would upend almost 80 years of non-alignment.

The Nordic nations' potential bids were thrown into question Friday when Turkish President Recep Tayyip Erdogan said his country is "not of a favourable opinion."

U.S. Secretary of State Antony Blinken was scheduled to meet his NATO counterparts, including Turkey's foreign minister, this weekend in Germany.