'We need help from the population': Health workers struggling in America's least-vaccinated state

The type of protest seen at Canadian hospitals this week is a familiar and unhappy fact of life for medical professionals in parts of the U.S.

American health workers have been waging a two-front battle for a while: against COVID-19 and against the anger over pandemic measures within their own communities.

When you pull up to one small-town health clinic in a semi-rural area of West Virginia, the first clue of that is the police car parked outside.

The second clue is the locked front door at the clinic, located inside the headquarters of the Berkeley County health department in Martinsburg, W.Va.

Workers here say they have endured abusive calls; shouting visitors; and threatening online posts, some of which have included their home addresses and phone numbers.

West Virginia is currently the least-vaccinated state in the U.S. by some yardsticks, with about half of adults fully vaccinated. 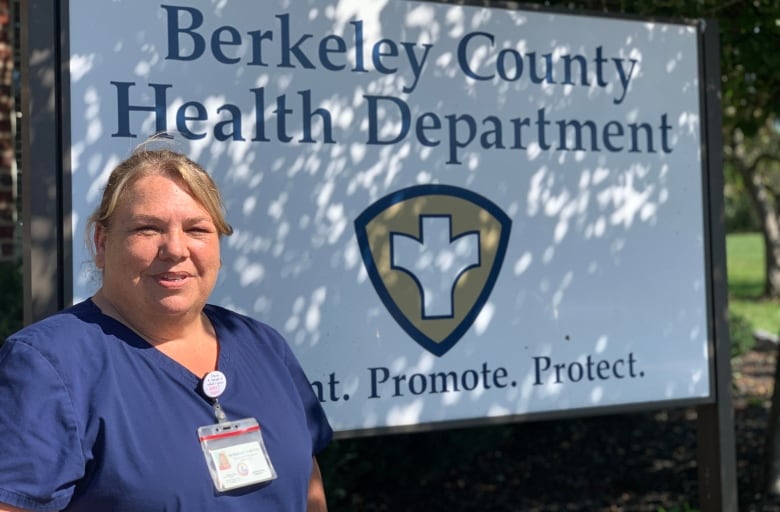 Some of the unvaccinated residents have taken their frustration out on health workers, prompting the request for police presence at the Martinsburg clinic.

There have been numerous reports of recent assaults on health workers from across the U.S., but they're not the only ones who have been targeted. In Arizona, a parent was recently arrested for allegedly threatening to zip-tie a school principal and make a citizen's arrest over a COVID quarantine protocol.

A major source of anger recently directed at the health workers in Berkeley County involves mask mandates in schools. Rather than impose a statewide policy, West Virginia's state government delegated responsibility to local school boards and asked them to consult with health officials in their area.

The state was initially held up as a model in the fight against COVID earlier this year, with its strong uptake in the early vaccine rollout. 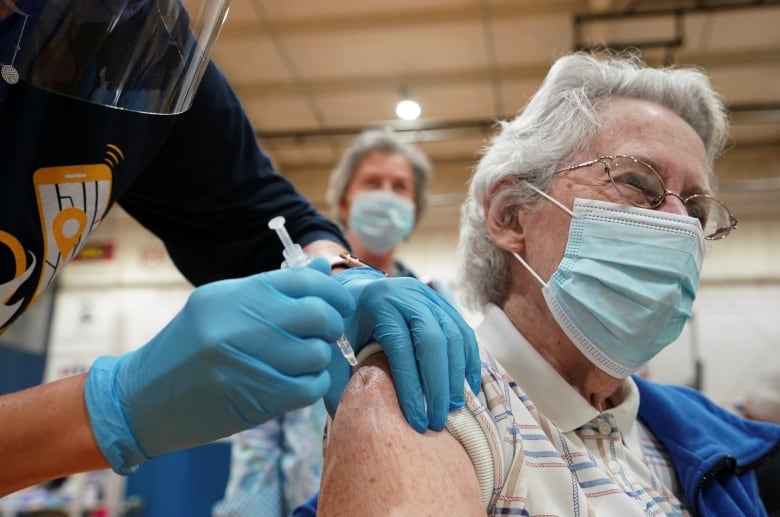 Mary Lou Russler receives a coronavirus vaccine during a community vaccination event in Martinsburg in March. West Virginia was originally held up as a model after a strong start to the vaccine rollout but now has among the lowest vaccination rates int he U.S., with about 50 per cent of the adult population fully vaccinated. (Kevin Lamarque/Reuters)

Then the rate of vaccination stalled. Now, West Virginia has the lowest percentage of vaccinated adults in the U.S.

He revealed executive orders that would see federal government workers and contractors risk fines or termination if they don't get vaccinated; he's also doubling the fines for travellers who break mask rules on planes, trains and buses.

Biden's move has enraged swaths of the country; legal challenges are imminent.

That blowback comes as no surprise to health workers. They've experienced first-hand how vocal a minority of unvaccinated people can be. 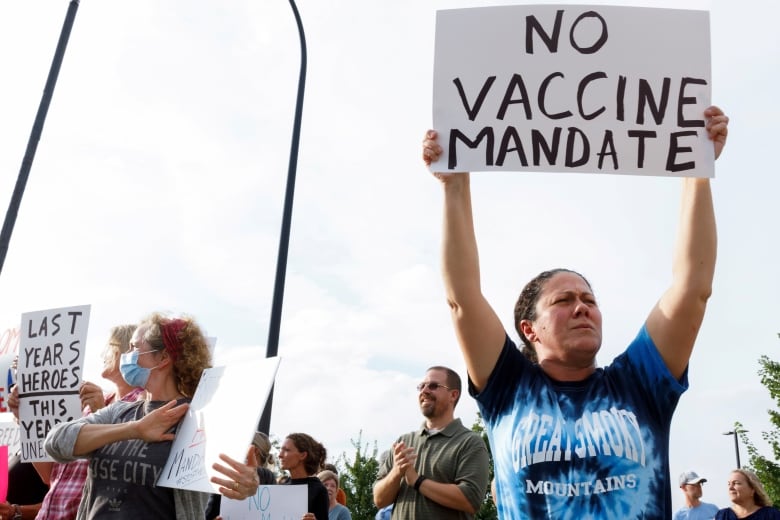 People protest against vaccine mandates outside Summa Health Hospital in Akron, Ohio, on Aug. 16. Protesters across the U.S. and Canada have held demonstrations outside hospitals and other health facilities, prompting condemnation from political leaders. (Stephen Zenner/Reuters)

She expects their effect will resemble, on a broader scale, the impact of private-sector vaccination mandates: when companies have forced workers to get the shot, she says, employees wind up coming to the Martinsburg clinic to get one, grudgingly.

"Even if [people are] not happy about it, when they come in, they're not blaming us," she said. "It takes some of the heat off of us. … He [Biden] is taking one for the country."

It's not clear that Biden will actually take a political hit because of the new mandates. In fact, there's some polling suggesting they might be politically popular with the majority of American adults who've already gotten the shot.

What's inspired all this is the delta variant.

As it has elsewhere, the variant has led to an explosion of cases, and deaths, and clogged hospitals in multiple states.

In West Virginia, the COVID-19 caseload is 40 times what it was during the early-summer low; more than 200 people died in the state over the last month; hospitalizations, ICU admissions and use of ventilators all recently hit all-time peaks. 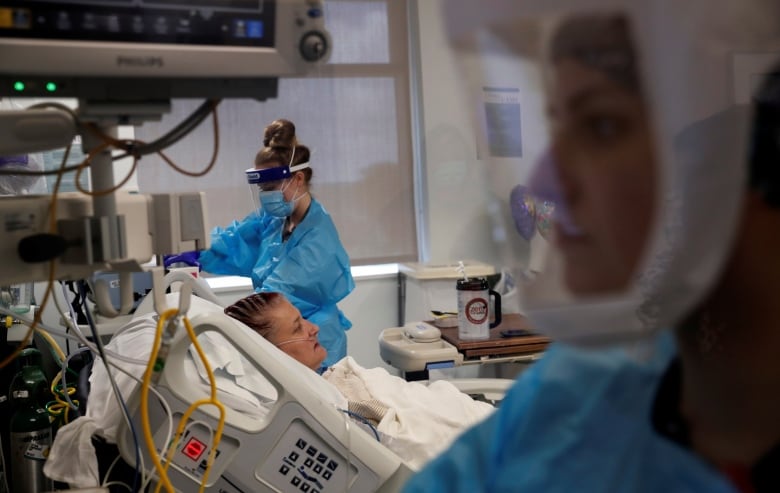 ICU beds are filling across the country as COVID cases mount, including in the ICU of the University of Arkansas for Medical Sciences in Little Rock, Arkansas. (Shannon Stapleton/Reuters)

Health workers are upset and exhausted.

At the West Virginia University Berkeley Medical Center in Martinsburg, Dr. Connie Smith says the last few weeks have been the hardest of the pandemic for some staff — including doctors, nurses, the hospital cleaning staff and security guards.

"It's been very difficult," said Smith, who is the centre's director of infectious disease and employee health.

"In a lot of ways, it's more impactful than the first [wave last year]. Because people are more fatigued — both physically and emotionally."

She said her hospital's COVID-19 patients are now mostly younger, between the ages of 20 and 50, and mostly unvaccinated.

Staff in that age group struggle with seeing rising illness among people their own age and watching multiple members of the same family die of COVID-19 — some leaving spouses and children behind. Smith said.

"[We've lost] two or three brothers [in the same family], and an uncle, a mom or dad. It's not just something you read. It's true," she said. 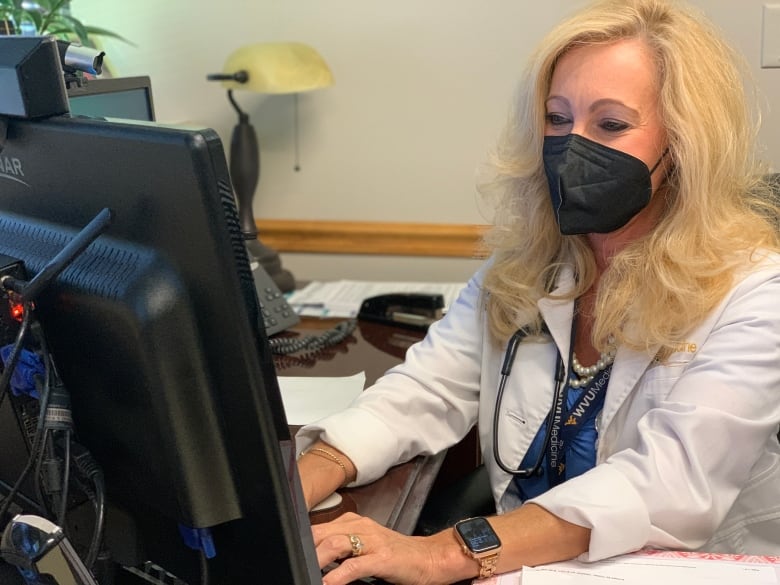 She said staff regularly ask patients if they've been vaccinated and what they are seeing now is relatives of people who have fallen ill with COVID-19 being spurred to get the shot once they see the damage caused to their loved ones.

"They will then reach out and ask, 'Where can I get the vaccine? Is it still available? … Which one should I get?'"

It's a similar story across the state border with Maryland.

In nearby Frederick, Md., Kathy Weishaar said the intensive-care unit was filling up last week at her hospital. Almost all the 18 ICU beds were occupied; nine were filled with COVID patients, four of whom were on a ventilator.

"Our staff have been rock stars, but they're tired," said Weishaar, chief medical officer at Frederick Health hospital.

"They're frustrated. Because they view what we're experiencing now as preventable.… We need help from the population. We need people to take this seriously." 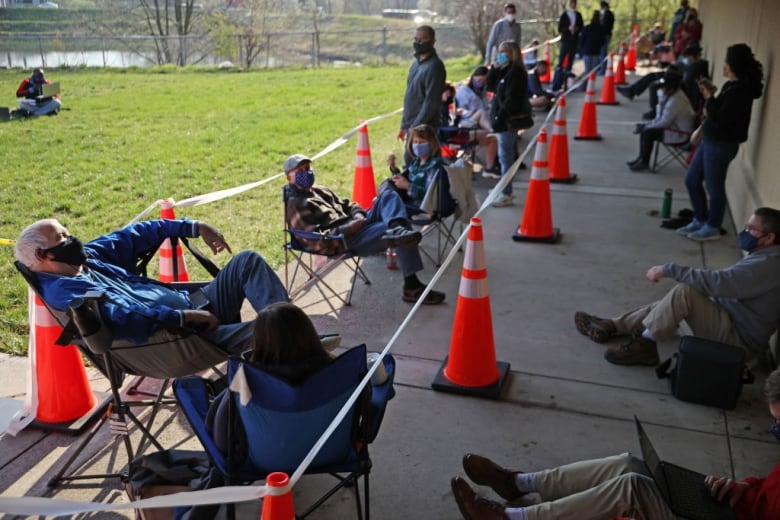 People wait outside a mass coronavirus vaccination site in Hagerstown, Md. in April. Enthusiasm for the shots has since waned and some hospitals in the state are seeing the number of COVID-19 patients rise again. (Chip Somodevilla/Getty Images)

Vaccination rates tapered off across the U.S. after peaking on April 11 — that day, 3.48 million doses were administered in the country.

Then, suddenly, the supply of vaccine doses began outstripping demand.

New vaccinations declined and bottomed out on July 10, when the number of doses administered was a mere 13 per cent of what it was in April.

In a brick building off a semi-rural road in West Virginia, Terrence Reidy says he was distributing 3,000 vaccine doses per week in March.

Now, the health officer for Jefferson County says there are weeks he doesn't even request any vials and sends the few takers to an area pharmacy. 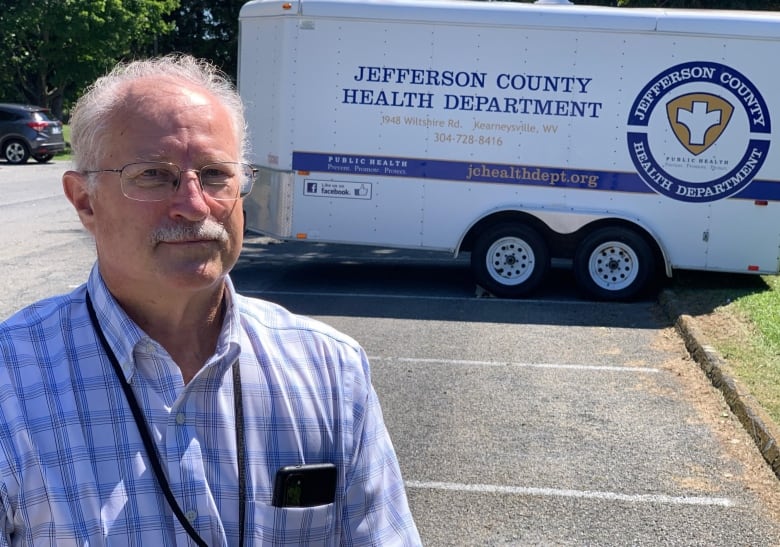 When demand dried up

Suddenly awash in unwanted supply, in the spring, his staff called area businesses, offering to bring vaccines on site. "There were no takers," he said.

One business actually did agree initially and said 70 of its employees needed shots. A clinic was organized.

"[But] nobody signed up." The clinic was cancelled.

He said it became an issue of cultural identity. "Almost like a religious belief," he said.

He wouldn't comment on whether he approves of Biden's attempt to force some workers to get vaccinations, but he did say he believes people should approach the unvaccinated respectfully.

"Meet them where they are," he said. 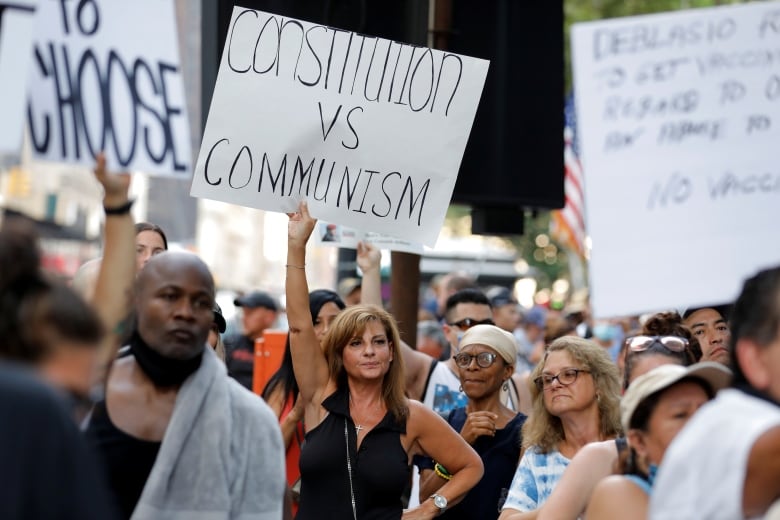 Anti-vaccine protesters, as seen here in New York City on Aug. 25, represent a minority opinion in the U.S., but a vocal one. (Andrew Kelly/Reuters)

In fact, he said, several members of his own staff are unvaccinated, albeit not frontline medical staff dealing with the public.

The president said he intends to order the roughly 17 million health care workers at hospitals and institutions that participate in Medicare and Medicaid social programs to get the shot. Private sector employers with 100 workers or more will eventually have to require vaccination or a weekly negative COVID test.

Similar actions already undertaken in the private sector seem to have had an impact: there was a small, recent uptick in vaccinations since the summer low as big companies have gotten stricter about requiring their workers to get shots.

That and the delta wave likely explained the recent increase, Gray said.

Gray says it pains her to see this happening in her native West Virginia, which she's always thought of as a tight-knit place where people cared about each other.

"Politics are huge in it," she said.

She relayed one conversation with an irate caller, a man who had verbally abused a member of her staff. Upset, Gray said she called the man back.

The man berated her and levelled what passes for an insult in much of West Virginia, where Republicans dominate state politics: She must be a liberal. 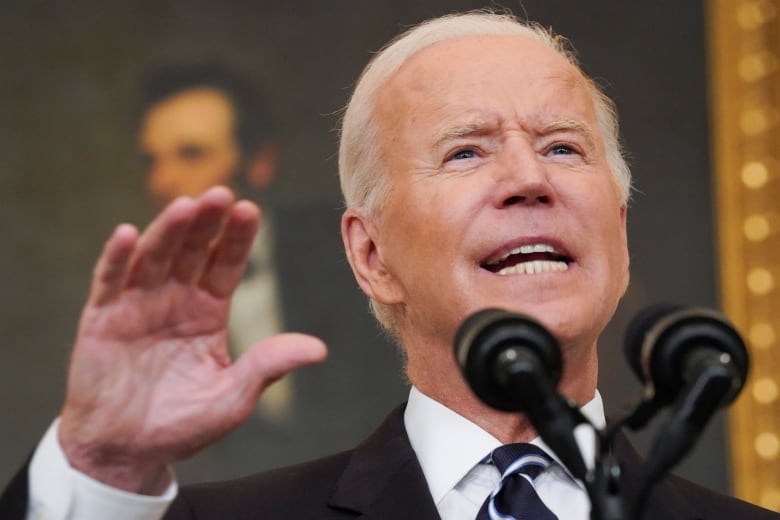 U.S. President Joe Biden delivers remarks on the delta variant and his administration's efforts to increase vaccinations at the White House Sept. 9. The debate over vaccine and mask mandates has become politicized in the U.S. as it has in other countries. (Kevin Lamarque/Reuters)

"You want to tell me politics ain't a part of it?" she said, recounting the conversation.

"Politics has been brought in from the get-go in this country."

Vaccine resistance is not always political.

People cite various reasons for not wanting to get vaccinated, including fear of new vaccine types; perceived insufficient oversight or details about the vaccine; unsubstantiated claims or conspiracy theories about vaccine safety; lack of, until recently, official FDA approval; opposition to governments or employers making vaccination mandatory.

In any case, Gray says, the caller's assumptions about her own politics were wrong. She said she's a moderate conservative, one of the small majority of Republicans who have been vaccinated.

One who wants this pandemic to end.